Welcome to the Taxpayers' Union Bribe-O-Meter.

As political parties have announced their policies leading up to the General Election, our independent economists have been crunching the numbers to show you just how much all the promises cost. The information below covers all spending policies announced up to 9am Monday 18 September 2017.

And the results are: 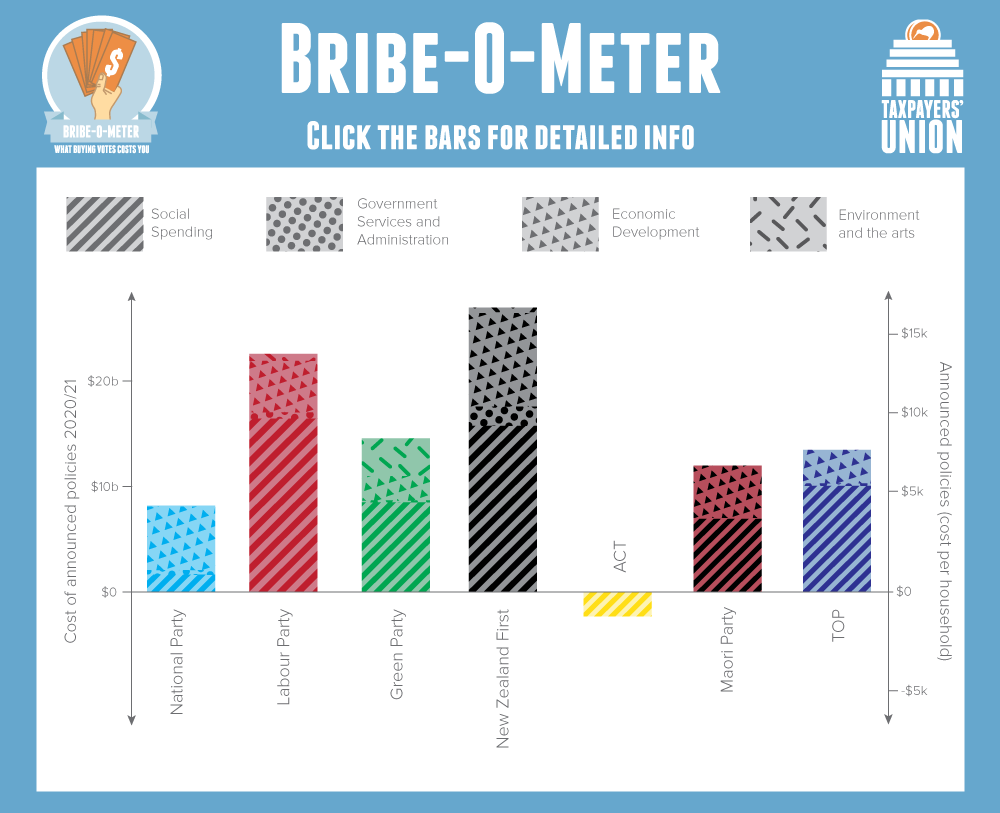 Click the shaded area of the parties above for detailed information on the spending promises in each area of spending.

To hear more about our campaigns standing up for Kiwi taxpayers, enter your email:

For more information on what the Taxpayers’ Union stands for, click here. 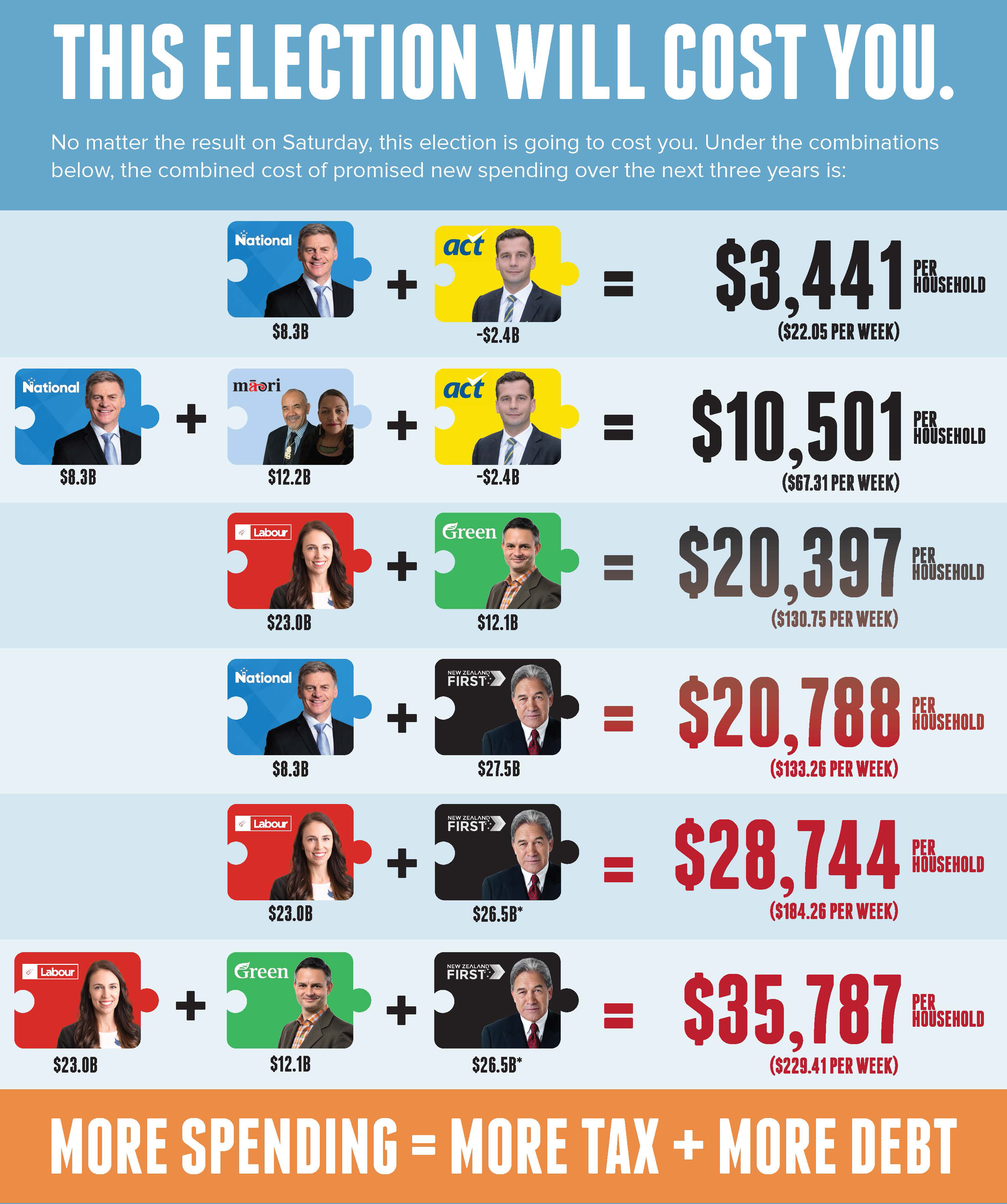 * Note that the coalition totals account for crossovers in policy (so they do not necessarily match the sum of the individual party figures listed above). The total figures per household assume that each party spends what it has promised, and does not take into account possible changes arising from negotiations to form a government. The New Zealand First figure when paired with the Labour Party is lower than when paired with the National Party because, in some cases, Labour is also promising to spend the same amounts in the same areas as New Zealand First.

For the final Bribe-O-Meter weekly update before the election, we've put together the combined manifesto costings for a range of potential coalitions. These figures will allow a better understanding of the fiscal implications of a potential future Government over the next three-year parliamentary term.

This week we have put together all the likely coalition options so that voters have a better idea of what their vote might cost taxpayers. While the coalition totals account for crossovers in policy, so there is no double counting, the figures assume that each party spends what it has promised. It does not take into account possible changes arising from negotiations to form a government.

A National-ACT coalition has promised the lowest new spending, combining for a total of $5.9 billion or $3,441 per household. Of which, National has promised $8.3 billion and ACT a net-reduction in spending of $2.4 billion over three years.

ACT, National and the Maori Party have promised a combined $18.1 billion or $10,501 per household. However, 67 percent of this total spending is from the Maori Party alone.

The Labour-Green coalition has promised $35.2 billion in new and unique spending, equivalent to $20,397 per household. There is considerable crossover in Labour-Green policies which have been accounted for.

You can read detailed breakdowns of each party's policies (and the costs) here:

As part of the Bribe-O-Meter, our economic staff have assessed political party's transparency across policy detail and cost and given each a score out of five (see below). The most transparent party has been National. The least transparent is NZ First, closely followed by the Māori Party. 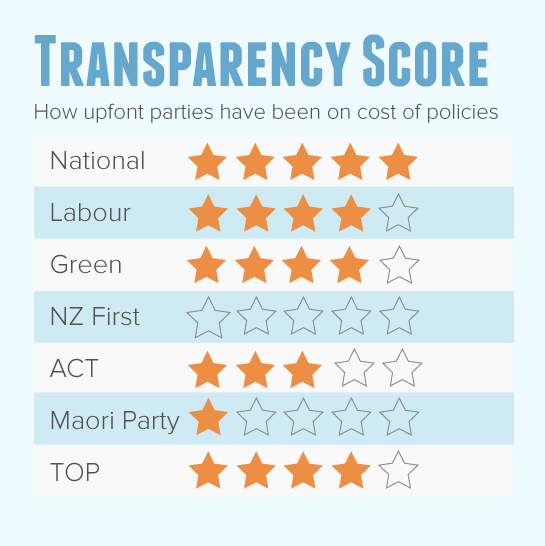 Elections are expensive — that's why we've worked hard to create this year's Bribe-O-Meter.

Help us spread the word with targeted Facebook advertising of the Bribe-O-Meter so that more New Zealanders learn what the election bribes will cost them as taxpayers. Based on previous campaigns, we can attract a new visitor to the Bribe-O-Meter for every 7 cents spent.

If you think more New Zealanders should see how much their vote will cost, click here to buy some online ads for this year's Bribe-O-Meter.

What is the methodology and how is the information displayed?

The Bribe-O-Meter compiles the political promises of each of the main political parties and places them within the major spending portfolios.

It assumes that the government elected on 23 September will last for a full three-year term and oversee Budgets 2018/19 to 2020/21.  Policies announced that do not come into effect during the next Parliament will not be included in the figures.

Tax credits and rebates have been considered as constituting new spending.

Will you work with political parties to correct or refine the numbers?