The Government's feeling the pressure on its cycle bridge 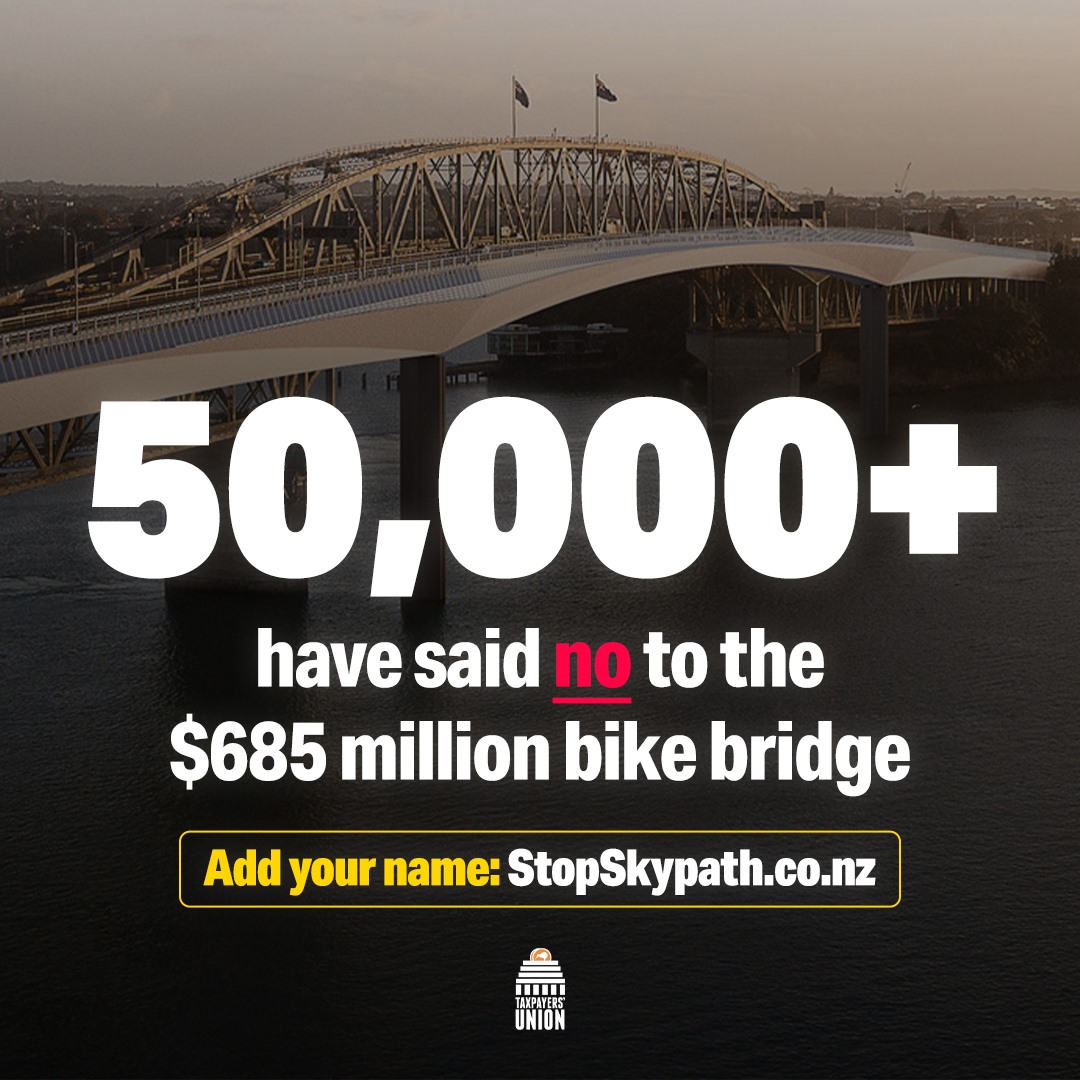 The proposed $685 million cycle bridge has perhaps been the Government’s worst political misfire.

And it seems the Finance Minister is feeling the heat: he's now just describing SkyPath 2.0 as the "current" proposal, and is talking up the changes of building an alternative tunnel crossing.

This progress is the result of people power. Our petition against the bridge has been signed by an incredible 58,000 New Zealanders, and our online ads and billboards have been seen by millions of New Zealanders.

With one last push, let's put the final nail in the coffin and force the Government to bin this wasteful project. Click here to chip in to the campaign fund to stop SkyPath and keep the heat on the Beehive. 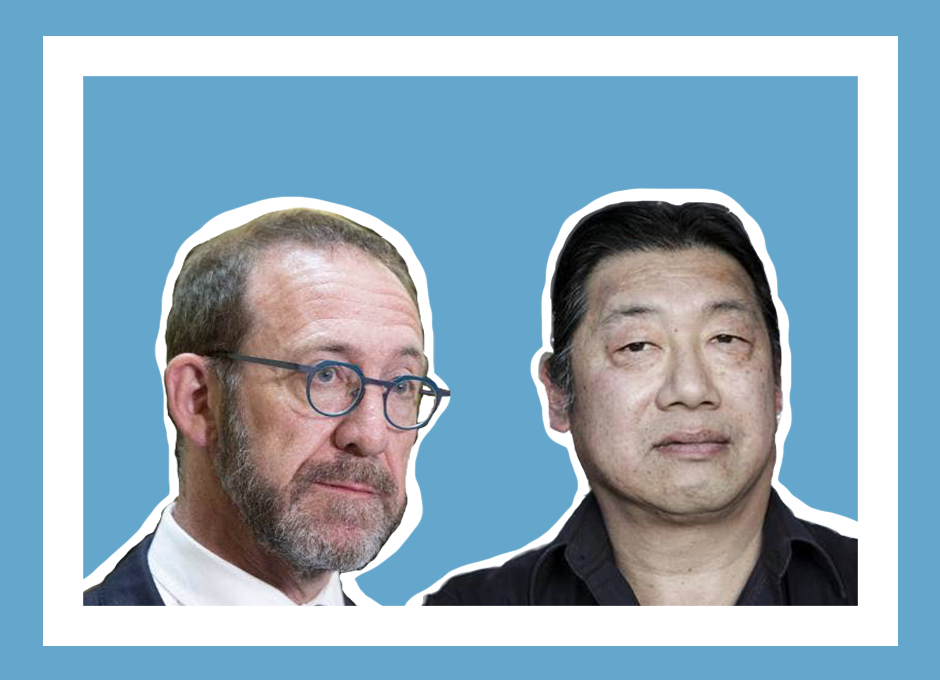 Remember how Andrew Little defended giving a $2.75 million contract to a Mongrel Mob-affiliated organisation by claiming its leader was just a "former" gang member?

We can now confirm what many of you suspected: Hard2Reach director Harry Tam is in fact a patched lifetime member of the Mongrel Mob Notorious chapter. Our research team have uncovered a new interview with a small Māori media outlet where Mr Tam couldn't be clearer.

Andrew Little now has some explaining to do. Was he misled by Mr Tam, or officials, or was he being economical with the truth? Either way Kiwis deserve a retraction, an apology, and a review of the funding.

We're keeping the heat on the Government's gang funding

In case you missed it, here's a photo of the ad we ran on page two of Wednesday's NZ Herald: 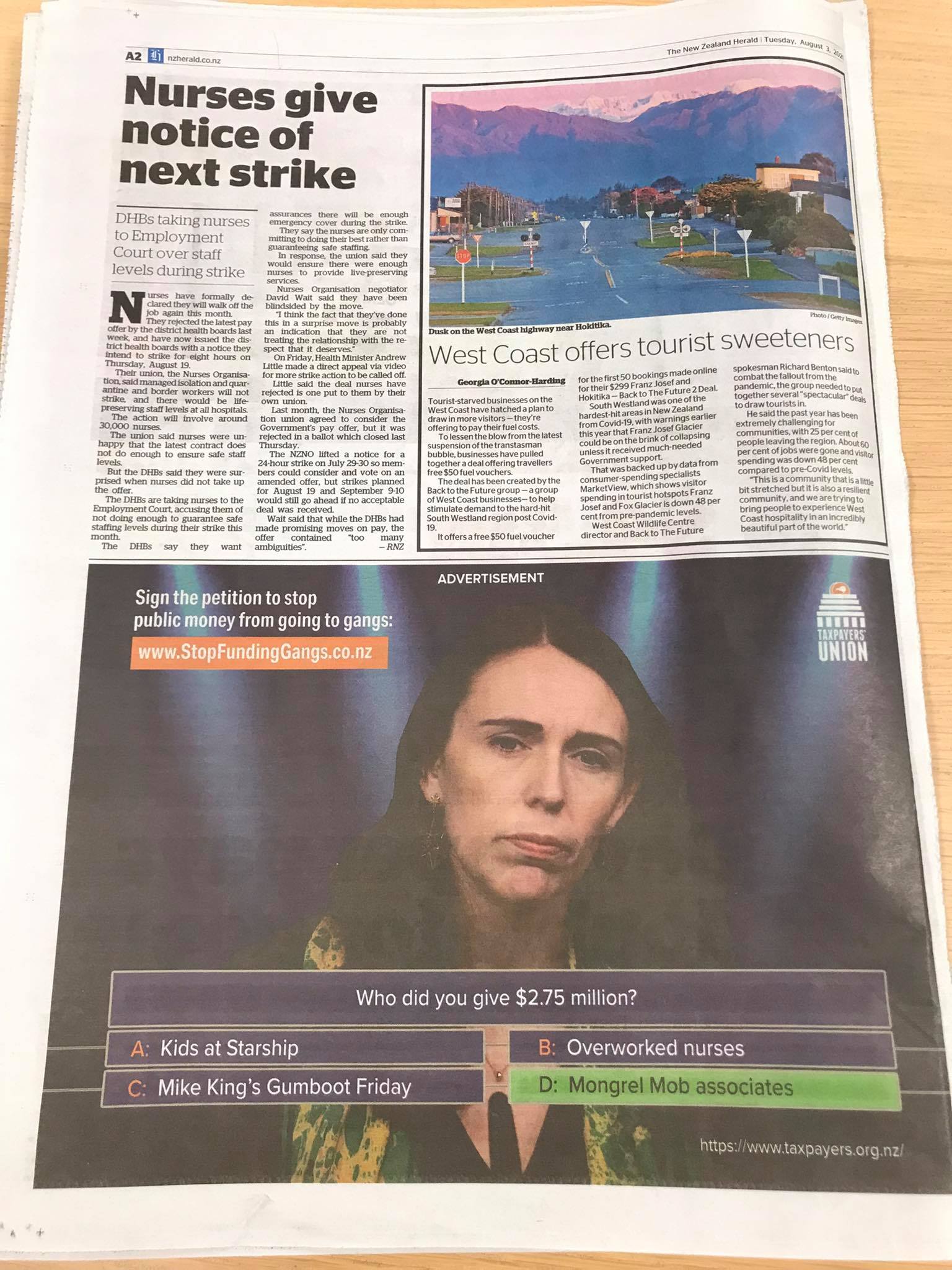 Click here to view a larger picture of the ad.

The ad was rejected by two separate billboard companies, so we were relieved to get it over the line with the NZ Herald. Thanks to everyone who chipped in to make it possible!

The Public Service Commission collects a wealth of statistics on the public sector, including the total headcount of public service employees.

It turns out growth in taxpayer-funded staff has boomed under this Government: 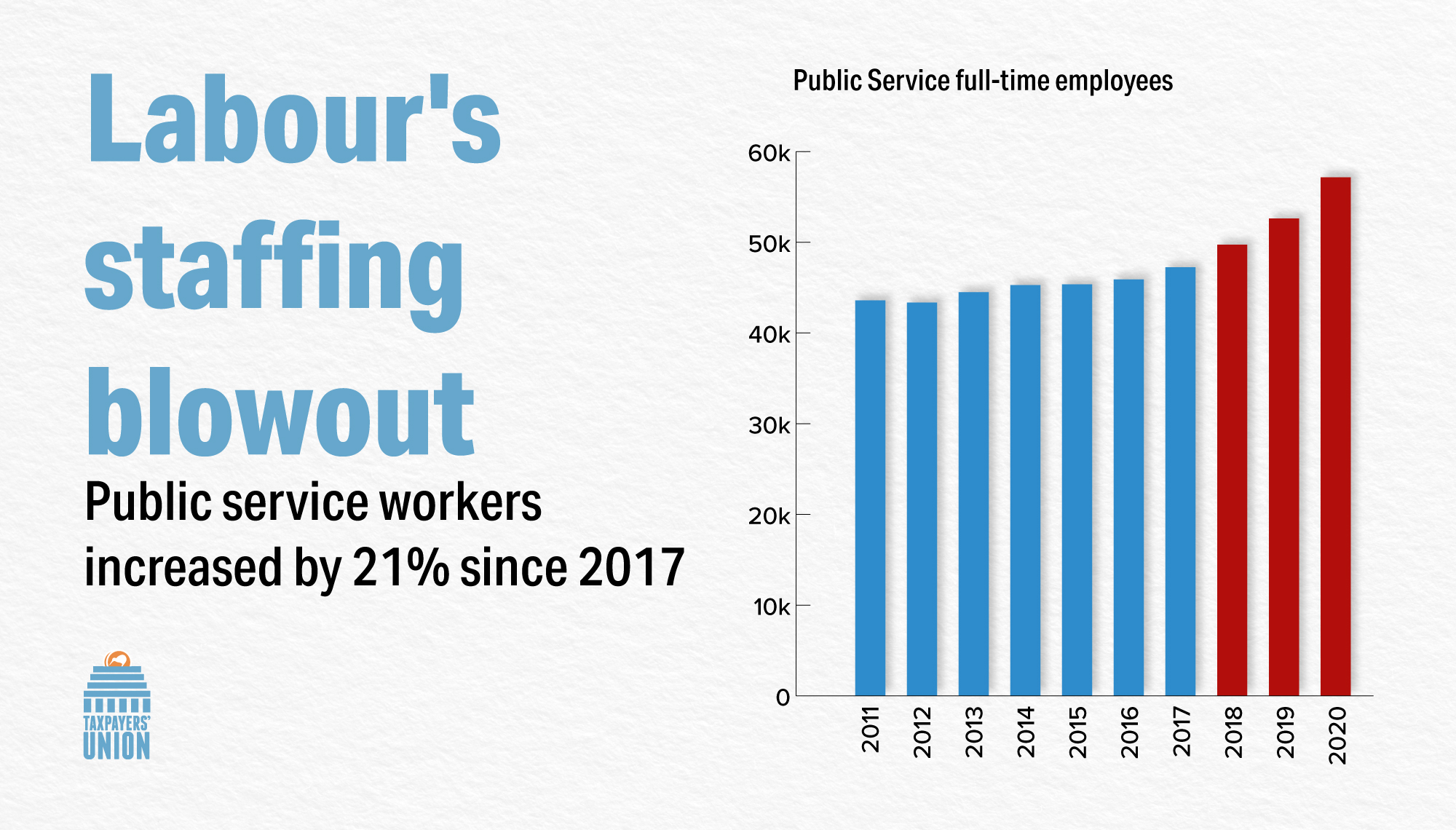 And that's based on figures from 2020. The Public Service Commission will update its figures in December, and based on recent reports from Radio NZ, we're expecting another big jump for 2021.

We asked the Public Service Commissioner for his thoughts. In an email to us, he said he's comfortable with such rapid growth, pointing to "an increase in investment to implement government priorities", and challenges like COVID-19 and two Royal Commissions of Inquiry.

But that doesn't explain why staff growth has been so consistent *across* the public sector.

For example, Stats NZ grew its staff numbers by 41% in just two years. Even the Beehive has become crowded with political advisors. A battalion of 332 staff now serve the Government's 20 Cabinet members: 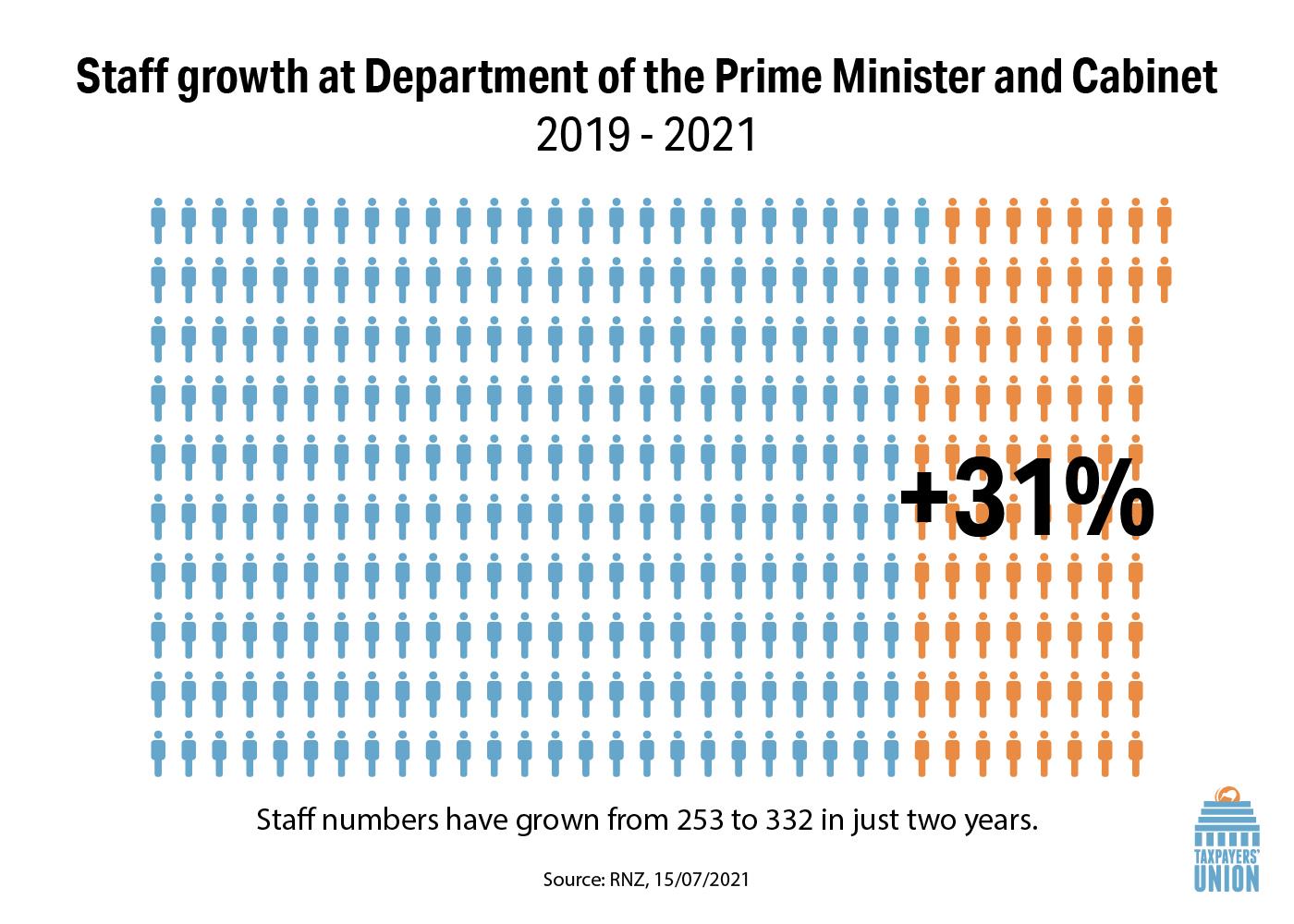 To us, that suggests a culture change towards bureaucratic growth, starting at the very top of the New Zealand Government. 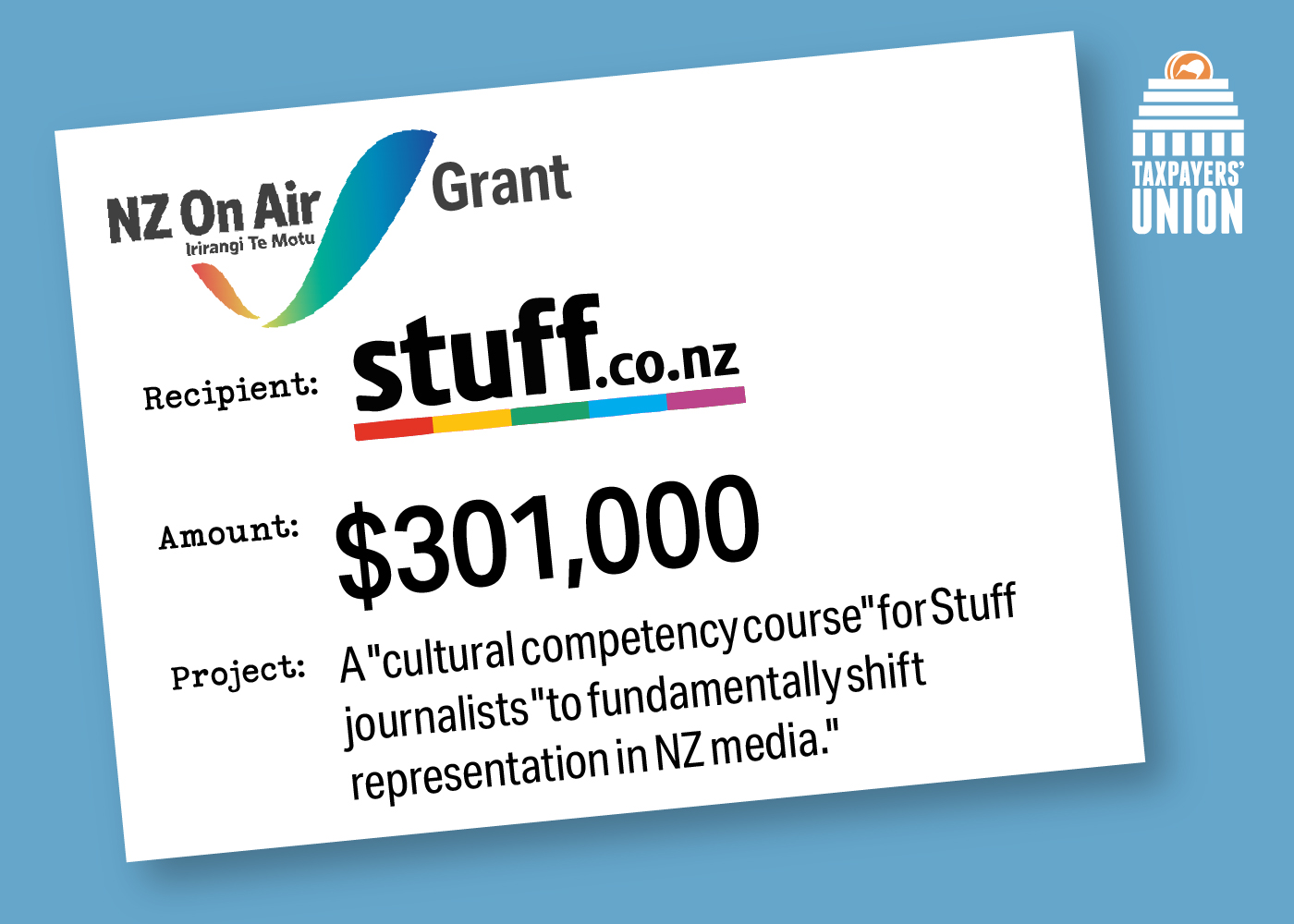 Taxpayers are paying for Stuff journalists to learn how to be more woke.

Media outlets have enjoyed a bonanza of taxpayer funding under this Government – especially with the introduction of NZ on Air's new "public interest journalism" fund.

But as you'll see, many of the funded programmes are at best strange, and at worst, stray into political propaganda.

We've also looked into the funding of one particular media outlet: our "friends" at The Spinoff, an online lifestyle magazine for left-wing millennials.

The Spinoff has had its funding spike in the last year, and is now engaged in a hiring spree. 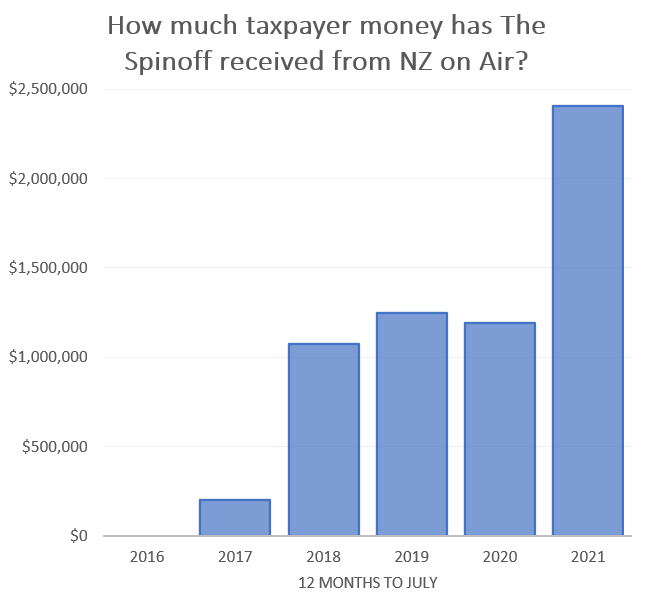 All of this raises the question: can a government-dependent media outlet truly be considered ‘independent’?

Report reveals how the RMA drives up grocery prices 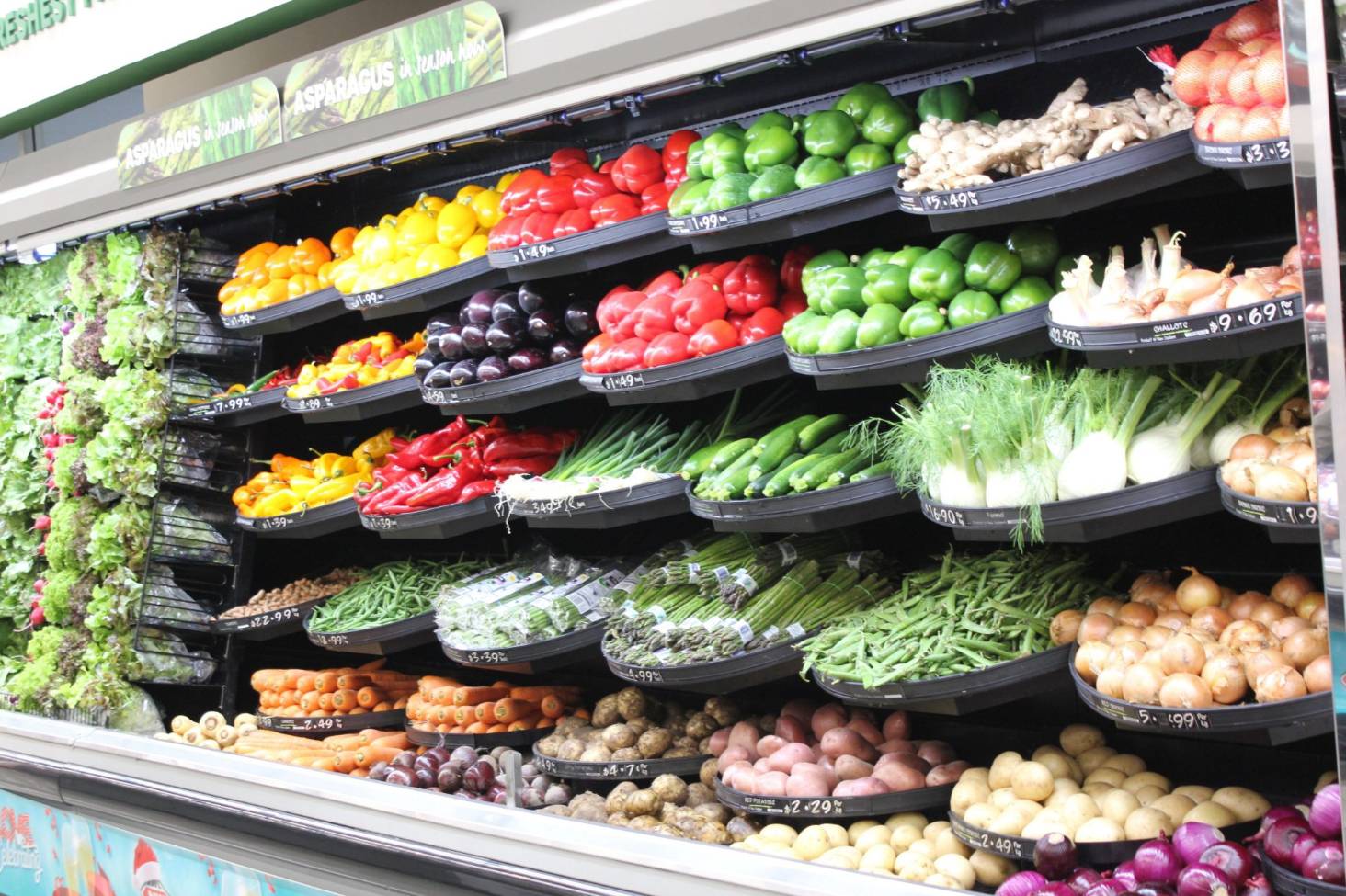 Plenty of media attention has been paid to the Commerce Commission’s draft report on New Zealand’s grocery market. But most commentators seem to have missed the most interesting part of the report.

The report absolutely skewers the Resource Management Act for the way it restricts access to suitable retail sites, drives up site prices, and helps existing shops lock out competition. All of this results in higher grocery costs for households.

If there’s one sentence in the entire report that epitomises the destructive power of regulation, it’s this: We note that the major grocery retailers have historically opposed each other’s resource consent applications under the RMA.

Madness! We should have scrapped this regulatory tax long ago.

A message for ute owners

First, the Government came after your wallets with the virtue signaling but carbon-useless ute tax. Now, taxpayer-funded academics are coming after your ute’s name too.

You probably do not know Kirsty Wild and Alistair Woodward at the University of Auckland, but you do pay their salaries.

Their research into utes apparently revealed that themes of dominance and violence are strong: vehicles have names like “Raptor” and “Gladiator”.

If they had their way, you'd presumably be working your farm in your Ford Kindness, driving to the construction site in your Toyota Unicorn, or taking the kids to school in your Nissan Neve.

Stand up for your ute by signing the petition at www.UteTax.co.nz.

A cause that deserves your support: Have your say on proposed "hate speech" laws

We seldom back causes outside our wheelhouse of Lower Taxes, Less Waste, More Transparency, but we're making an exception for the Government's proposed hate speech law changes, and the threat they present to the Taxpayer's Union's ability to do our job.

In 2018, several Taxpayers' Union staff were involved in forming the Free Speech Coalition, which has now transformed into a registered trade union fighting for free speech in workplaces across New Zealand. It operates independently, but we keep abreast of their work.

The Free Speech Union is leading the charge against the Government's hate speech law changes which could criminalise our criticism of wasteful spending and exorbitant taxation.

In fact one of the potential categories of 'hate speech' is insulting on the basis of political belief. That is chilling.

Already, the Taxpayers' Union is regularly accused by the Twitter mob of "divisive" and even "hateful" speech when we take controversial positions on sensitive spending. Under the proposed law change, insult and offence will be given the upper hand and could jeopardise our ability to hold government to account.

Would you be willing to have your say on the Government's hate speech reforms? Our friends at the Free Speech Union have created a tool to make filing a submission a two minute job.

Submissions close end of tomorrow so please act now before it's too late.

Homepaddock  But the $billion bridge

Kiwiblog  $6.1 million to The Spinoff from Taxpayers

RNZ  The ethics and costs of saving wild animals