The NZ Herald has confirmed what your humble Taxpayers' Union has been saying all along – Three Waters means higher water costs. Now that the first bill to implement the Three Waters reforms has passed Parliament, the Government is moving onto the next stages. The latest bill gives powers to the four new super entities to bill ratepayers directly for water usage. This is despite the fact that these entities are not accountable to the ratepayers who pay those bills. 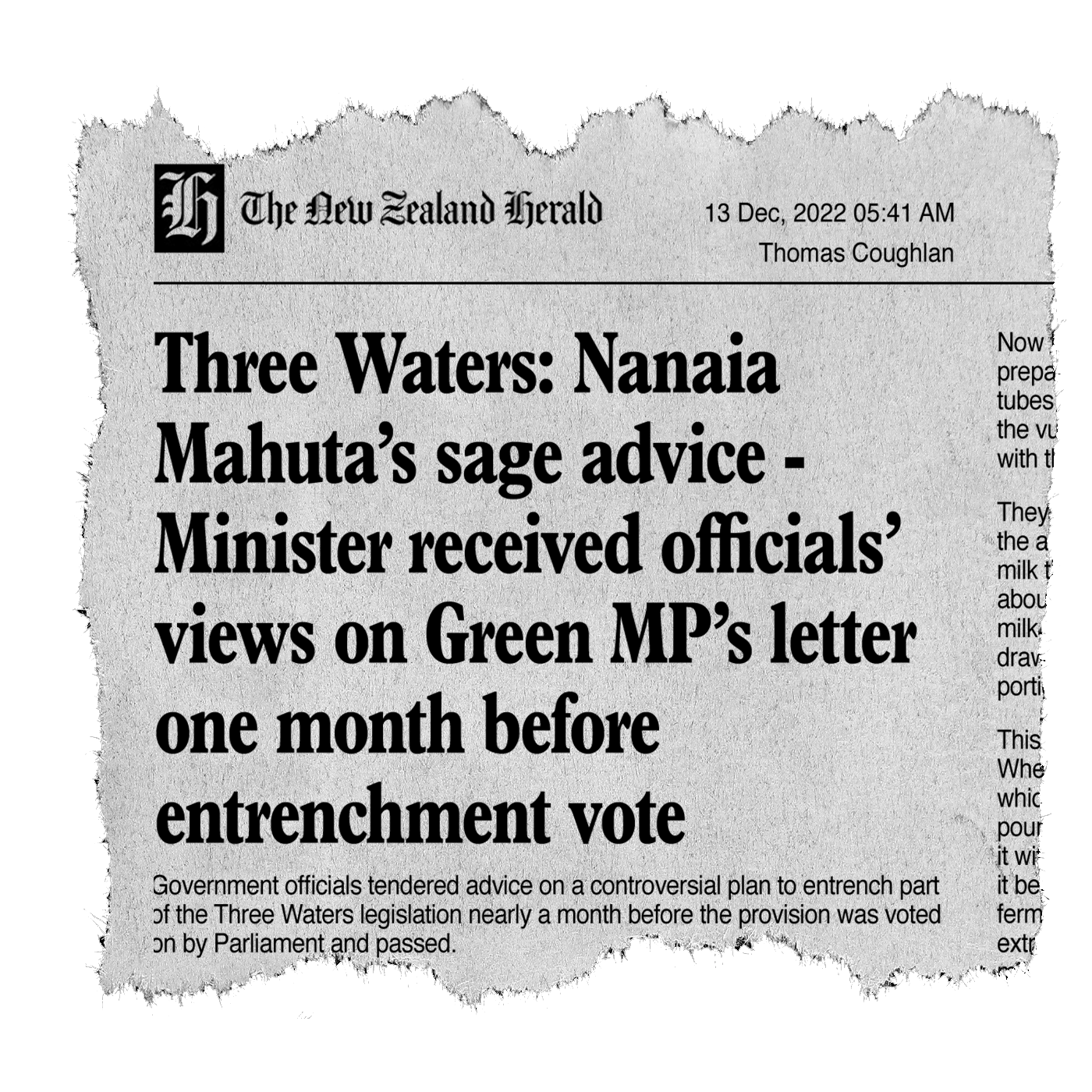 In documents published alongside the new draft legislation, officials have said that "some prices could increase significantly", which completely undermines the Government's repeated claims that Three Waters is essential to reduce water costs to ratepayers. With this confirmed, it is all the more important that the next government Scraps Three Waters.

Over the summer break keep an eye out for stage two of our campaign to keep this issue in the forefront of the public's mind. If you or someone your know has a good roadside sight, click here to order your own banner.

Available exclusively to supporters like you, we can reveal the results of our December Taxpayers' Union – Curia poll. 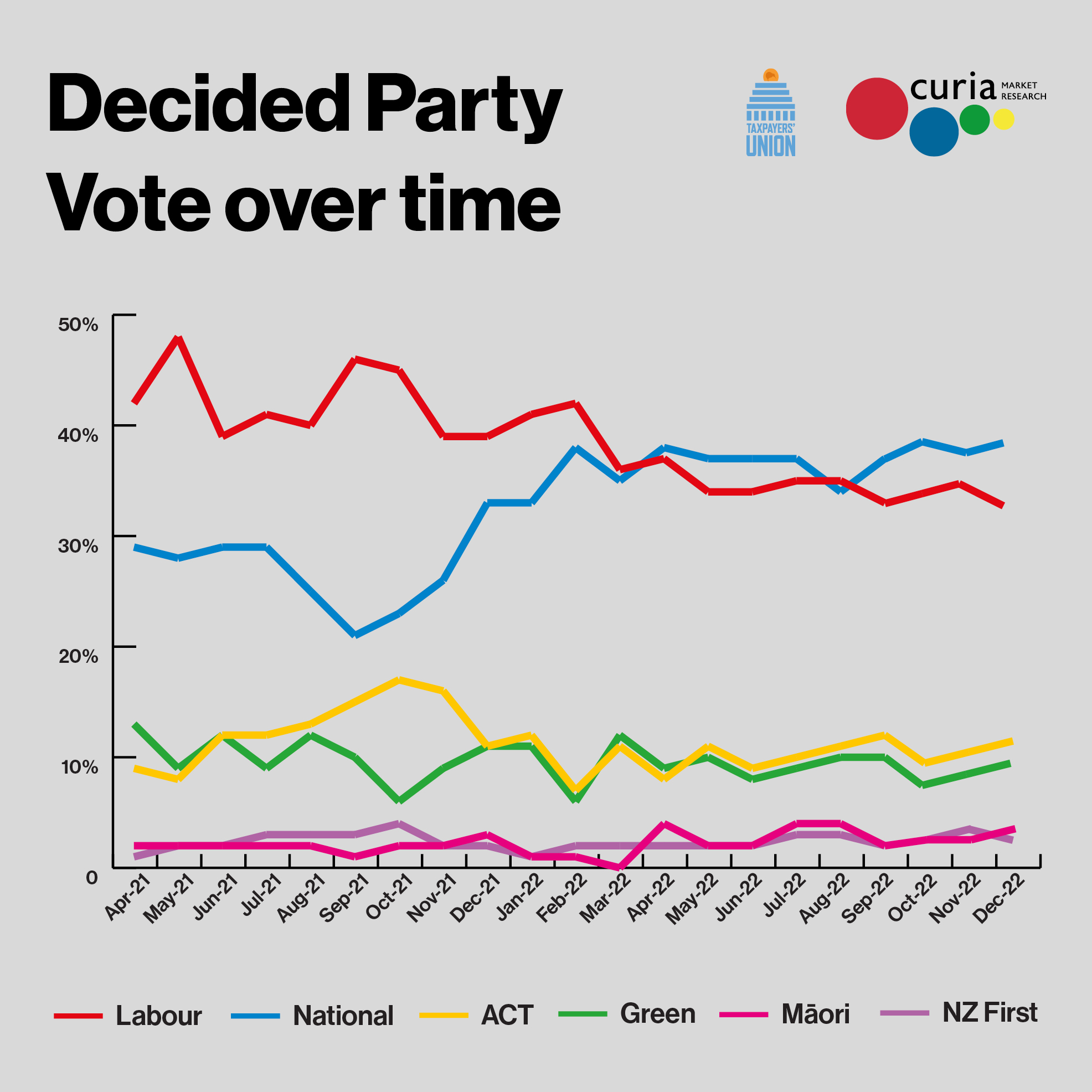 Labour falls two points to 33% – its equal lowest level in our poll – while National is up one point to 39%, which is its equal highest level. ACT and the Greens are steady compared to last month on 10% and 8%, respectively.

The smaller parties are the Māori Party on 3.5% and New Zealand First on 2.9%. 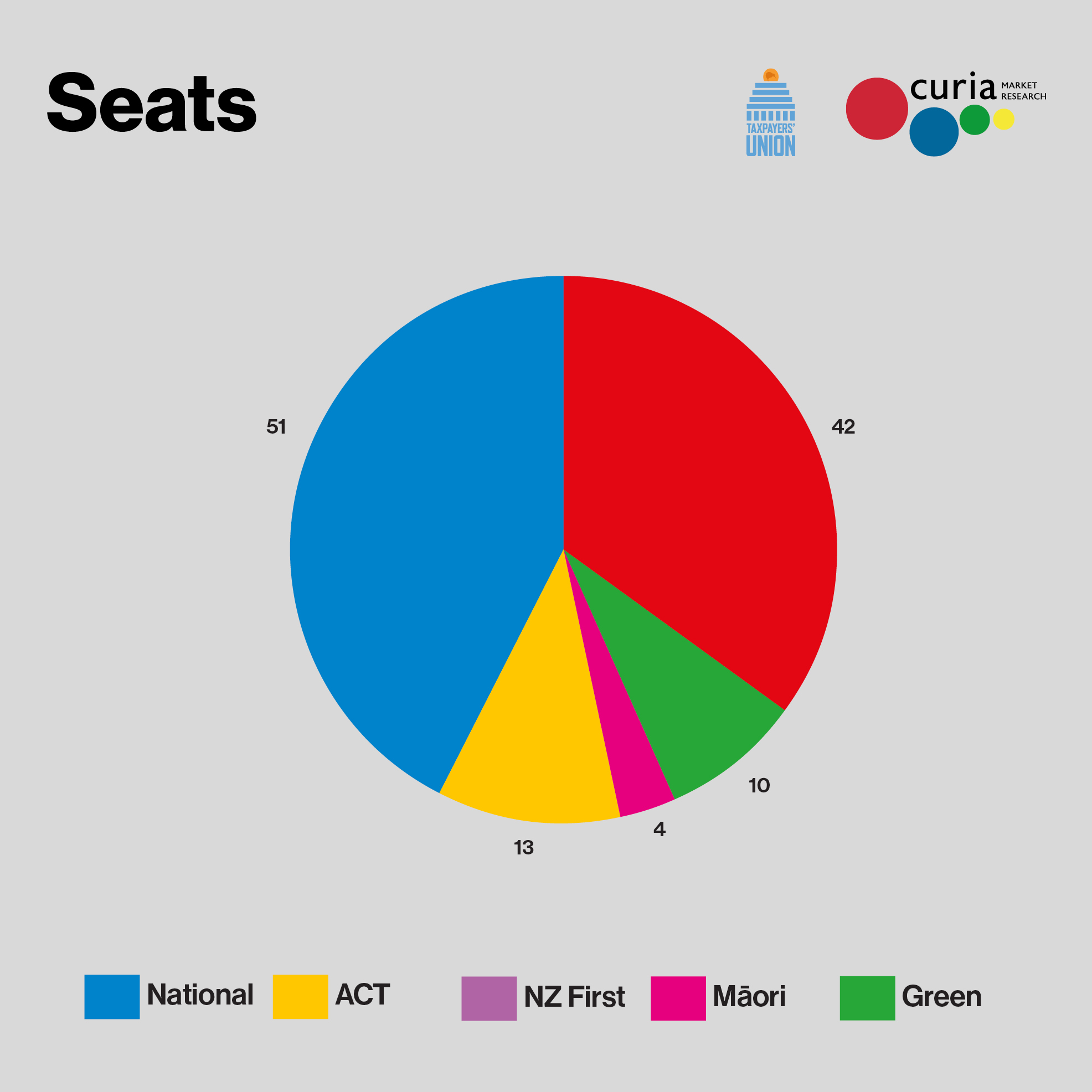 The Centre-Right reaches its highest combined level in our poll of 64 seats and could form government. The Centre-Left drops back four seats from 56 to 52.

There is also some good news for Christopher Luxon who has closed the gap in the favourability stakes. 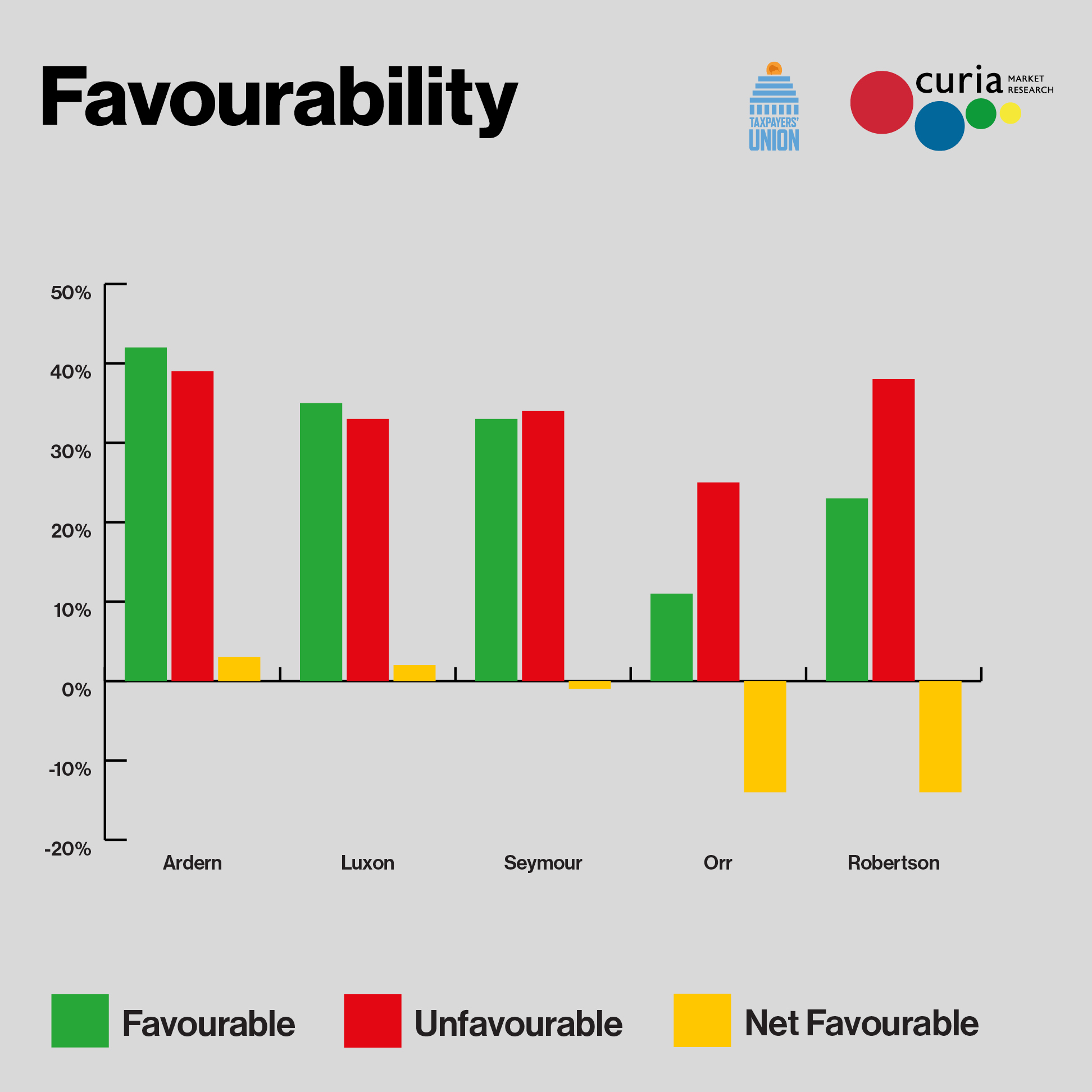 Jacinda Ardern’s net favourability has dropped five points compared to last month from +8% to +3%. This is a new low for the Prime Minister in our poll.

Christopher Luxon is now almost level with the prime minister with an increase in his net favourability of five points from -3% to +2%.

But "undecided" voters not keen on the National Party leader 👀

As a note of caution, however, when it comes to undecided voters, the Prime Minister maintains a strong lead on net favourability on +1% compared with Christopher Luxon on -29%.

This month, we also asked how people viewed Reserve Bank Governor, Adrian Orr, and Finance Minister, Grant Robertson. It seems that voters blame them equally for the current economic situation. Both have very low net favourability ratings of -14% each.

Visit our website for more information and details of how to get access to the full polling report.

ACT is wrong on indexation 💸 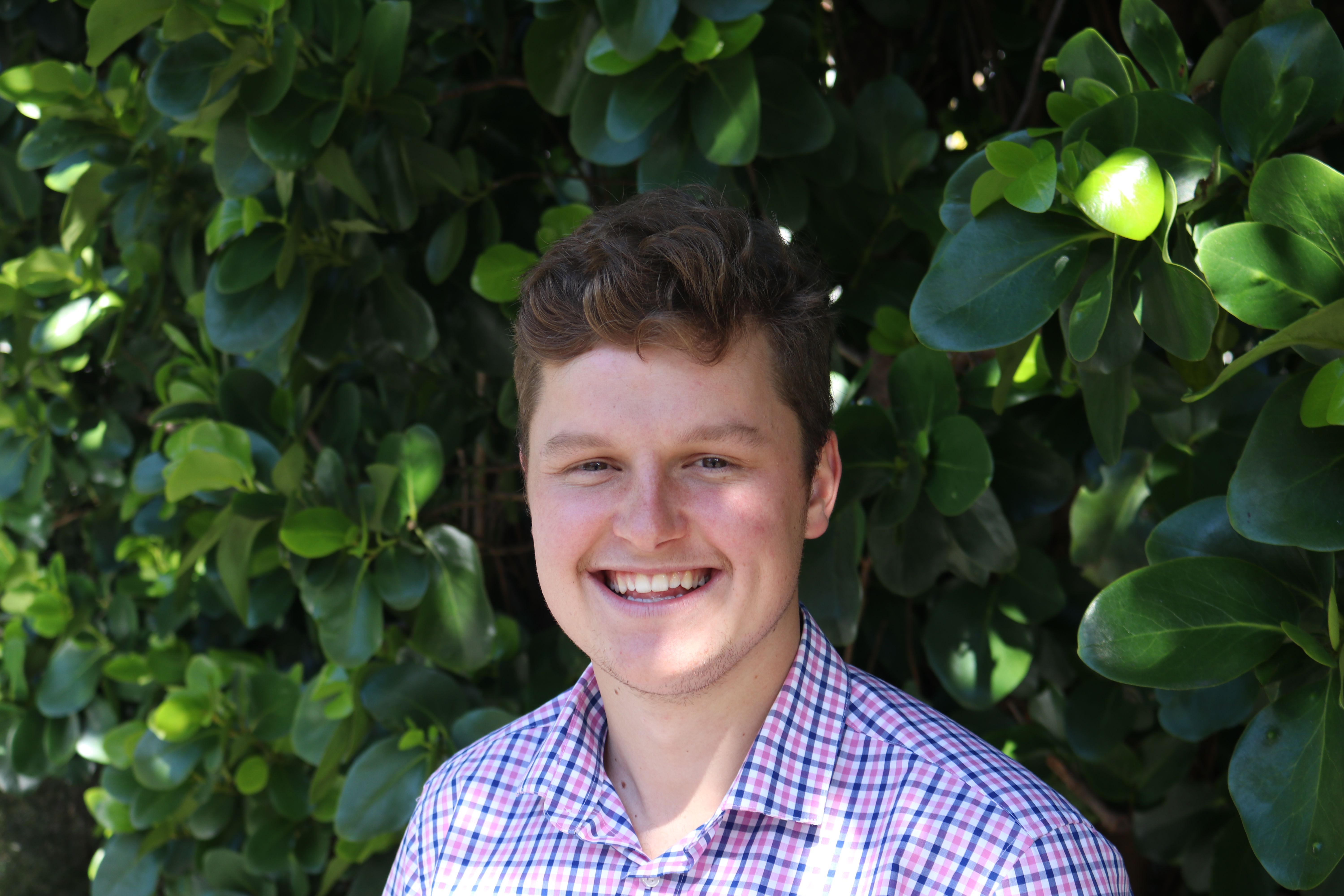 The Taxpayers’ Union has long supported the indexation of tax brackets to inflation. This is to stop the Government from taking a higher share of your income each year by stealth without a single vote having been cast in Parliament.

Until recently, ACT supported this approach too. Last month ACT put out a newsletter to say it had changed its mind. One of the reasons ACT gives is that it would apparently lock in Labour’s current tax rates and would not bring about the more radical reform ACT wants to see.

Now ACT’s proposals are the most thorough of what parties are offering, and the closest to what we want to see long term. But ACT is proposing two tax brackets rather than a flat tax and therefore its own policy will still be subject to bracket creep.

One of our young researchers, Connor Molloy, has written a great op-ed that looks into the issue of fiscal drag in more detail and explains why ACT have got this one wrong. Read Connor's op-ed here.

POLL: Kiwis back lobbying cooling off period for former ministers 🥶 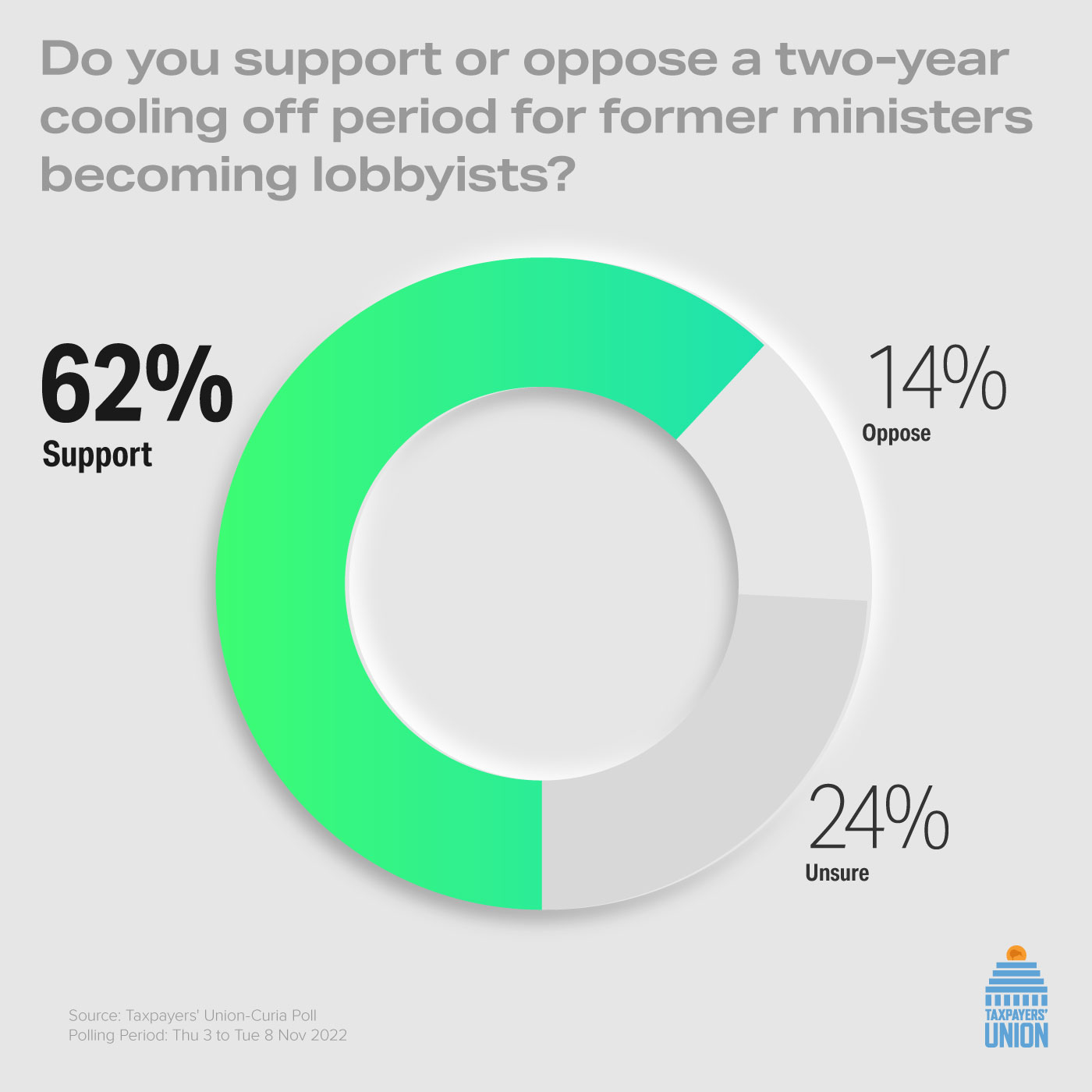 In the past few months, the revolving door from cabinet table to political lobbying has been in the spotlight thanks to the switch made by former Cabinet Minister Kris Faafoi. Such quick moves undermine trust in our democratic system.

Unlike in Australia and the United Kingdom, there is nothing to stop former ministers from jumping straight into the world of lobbying and monetising their recent intel and contacts. We have been calling for a cooling-off period to be introduced to prevent this.

Last week, we released polling showing that 62% of New Zealanders supported a two-year cooling-off period for former ministers. 14% of respondents were opposed while 24% were unsure.

It is a privilege to represent New Zealanders in Parliament: Former politicians should not be using their positions to make a personal profit.

We now need to see action—not just words. We have called on all parties to work together on a Parliamentary Bill to bring New Zealand into line with other Westminster-style parliaments and ban the revolving door of former ministers going straight into for-profit lobbying. 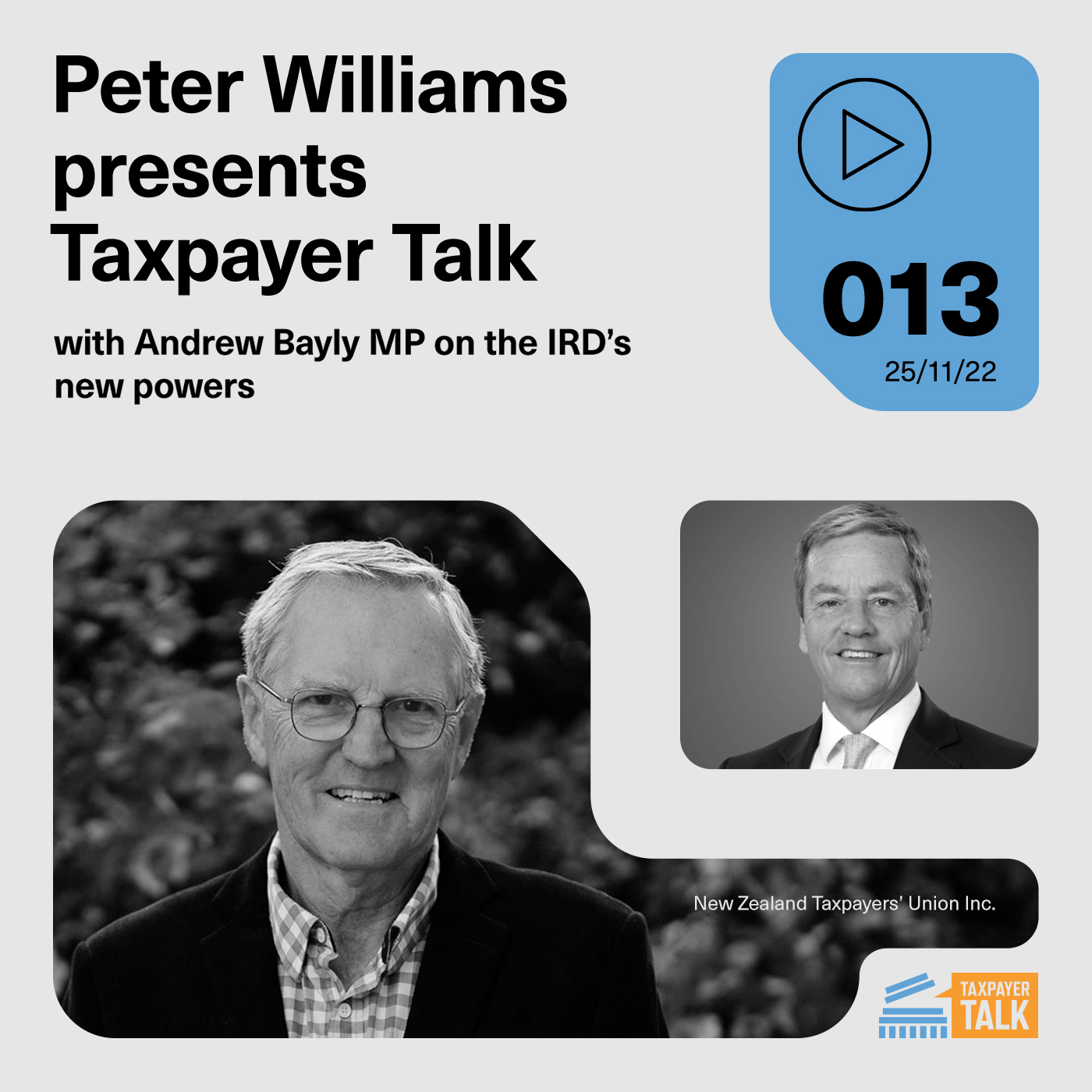 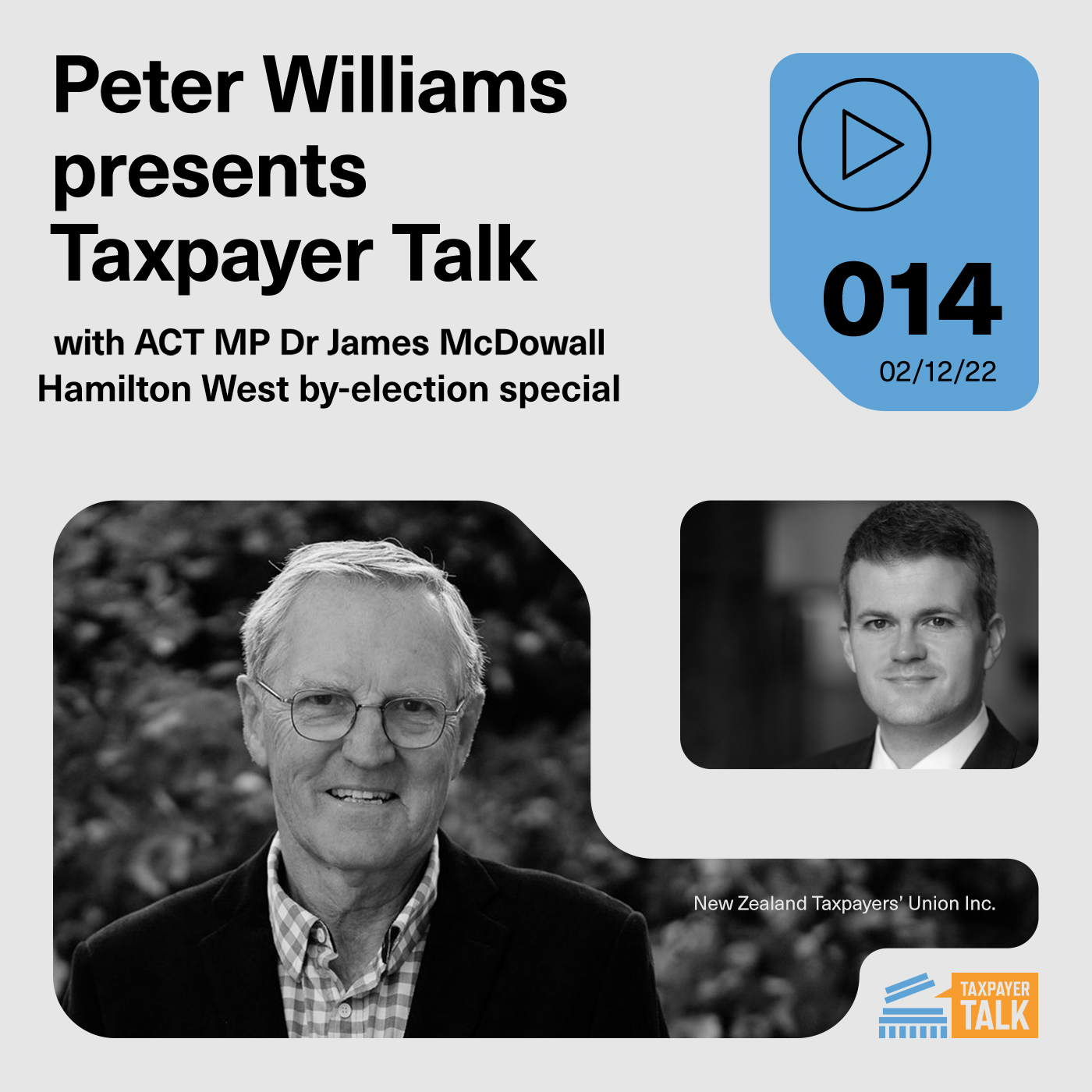 There have been two editions of Taxpayer Talk with Peter Williams since our last update.

In 2020, while all the attention was focused on the new 39% top tax rate, another clause was added into the Tax Administration Act 1994 that gives the IRD Commissioner the power to demand any information from individuals that they consider relevant for a purpose relating to the development of policy for the improvement or reform of the tax system.

Listen to the episode here.

The three highest polling candidates for Hamilton West were all invited to appear on this podcast but only Dr McDowall agreed to appear. Peter and James discuss the issues facing the electorate, his background before politics and why he wants to be Hamilton West's local MP.

Listen to the episode here.

Hawke's Bay Today Hawke's Bay councils plan to hike rates for years to come – but can we afford it?