This week's newsletter is a bit longer than usual. We were set to release the September Taxpayers' Union-Curia poll (see below) on Friday, but hit pause when we woke up to the news that Her Majesty, Queen Elizabeth II, Queen of New Zealand, had passed away.

Queen Elizabeth personified leadership through action and demonstrated remarkable grace and dignity in her service to the Commonwealth. The outpouring of grief from all over the globe is testimony to the high esteem in which she was held. We join the whole nation in thanking her for a life of exemplary service.

As with other taxpayer groups around the Commonwealth, the Taxpayers’ Union suspended its campaign activities during a period of mourning (you can read our public comments here: Taxpayers’ Union Pays Tribute To Her Majesty The Queen Of New Zealand, Suspends Campaign) 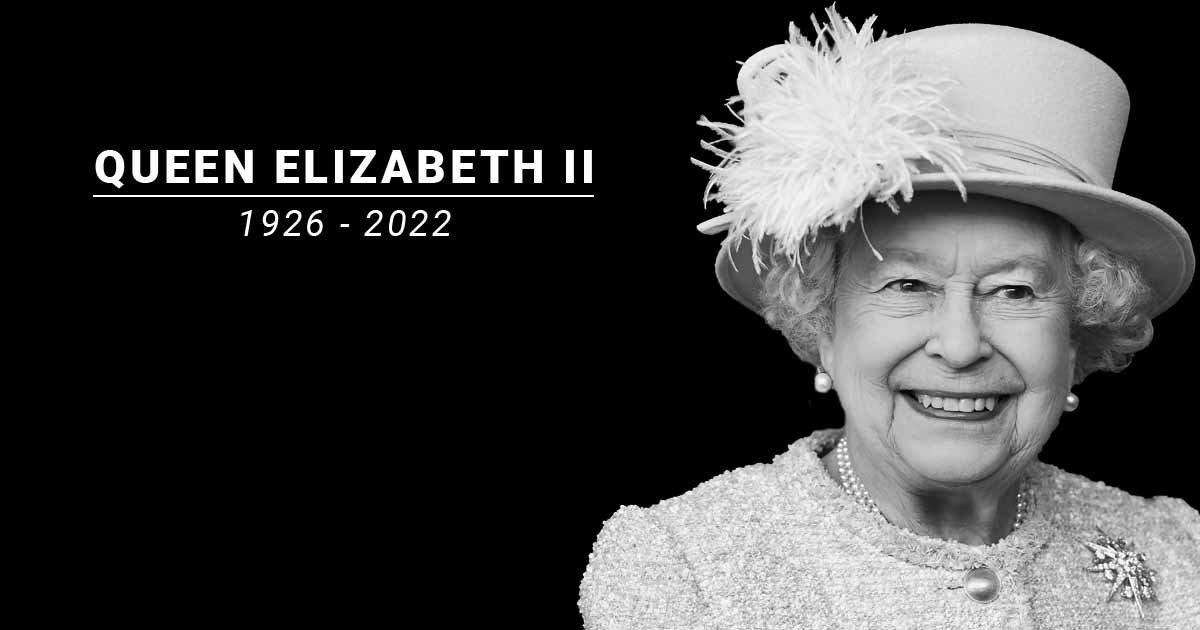 Public holiday yes, but who should pay?

Here at the Taxpayers' Union, sometimes our role is to be "Scrooge McDuck" – after all, who else will push back against politicians giving away other people's money?

I'm a stanch royalist (my co-founder David Farrar is a republican) but was pleased to support Chris Milne's take that no public holiday is "free":

The Taxpayers’ Union supports the principle of a day where New Zealanders can come together to pay their respects. However, taxpayers are being told by the Government to foot the huge bill for another day of leave in the public sector.

For small businesses—who are still trying to recover after the pandemic—this is yet another cost loaded on. The owners of these businesses, many small family enterprises, are being told to pay not only for their own respect for the Queen, but also for all the respect shown by their staff. This is inequitable. The Queen was the queen of us all and the cost should fall on all of us.

Rather than rejecting the idea of an observance to recognise the Queen, the Taxpayers’ Union believes that New Zealanders should, if they wish to do so, take a day of annual leave to mark this historic occasion and an extraordinary life.

Less than 24 hours later, ACT was on board with the idea with David Seymour saying that workers should have a right to take a day of either annual or unpaid leave on the public holiday, but without costing our businesses another day of wages. See Day of recognition without the costs is the answer – David Seymour 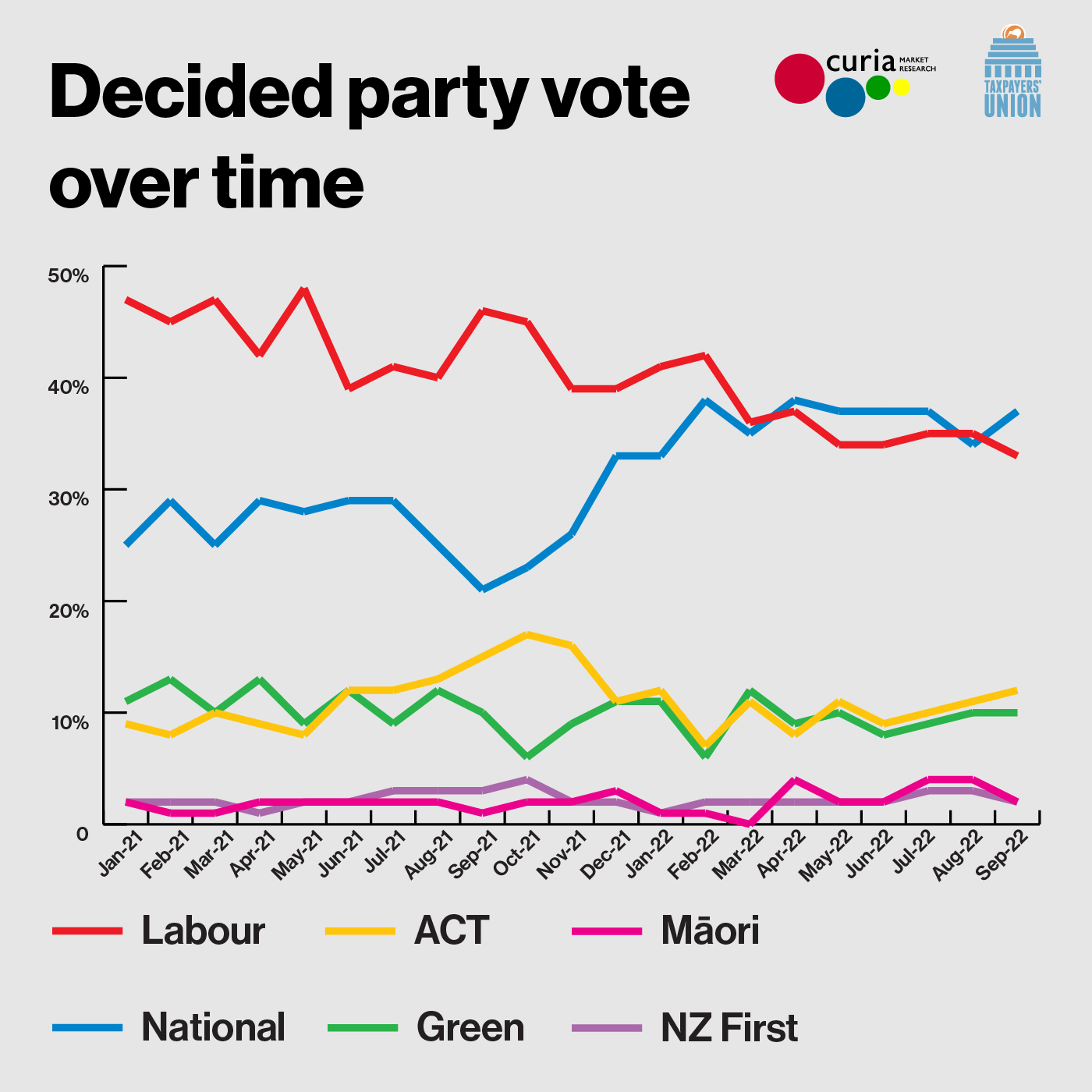 The poll was taken in the nine days up to last Thursday evening (thus the Queen's death delayed the publishing of the results). 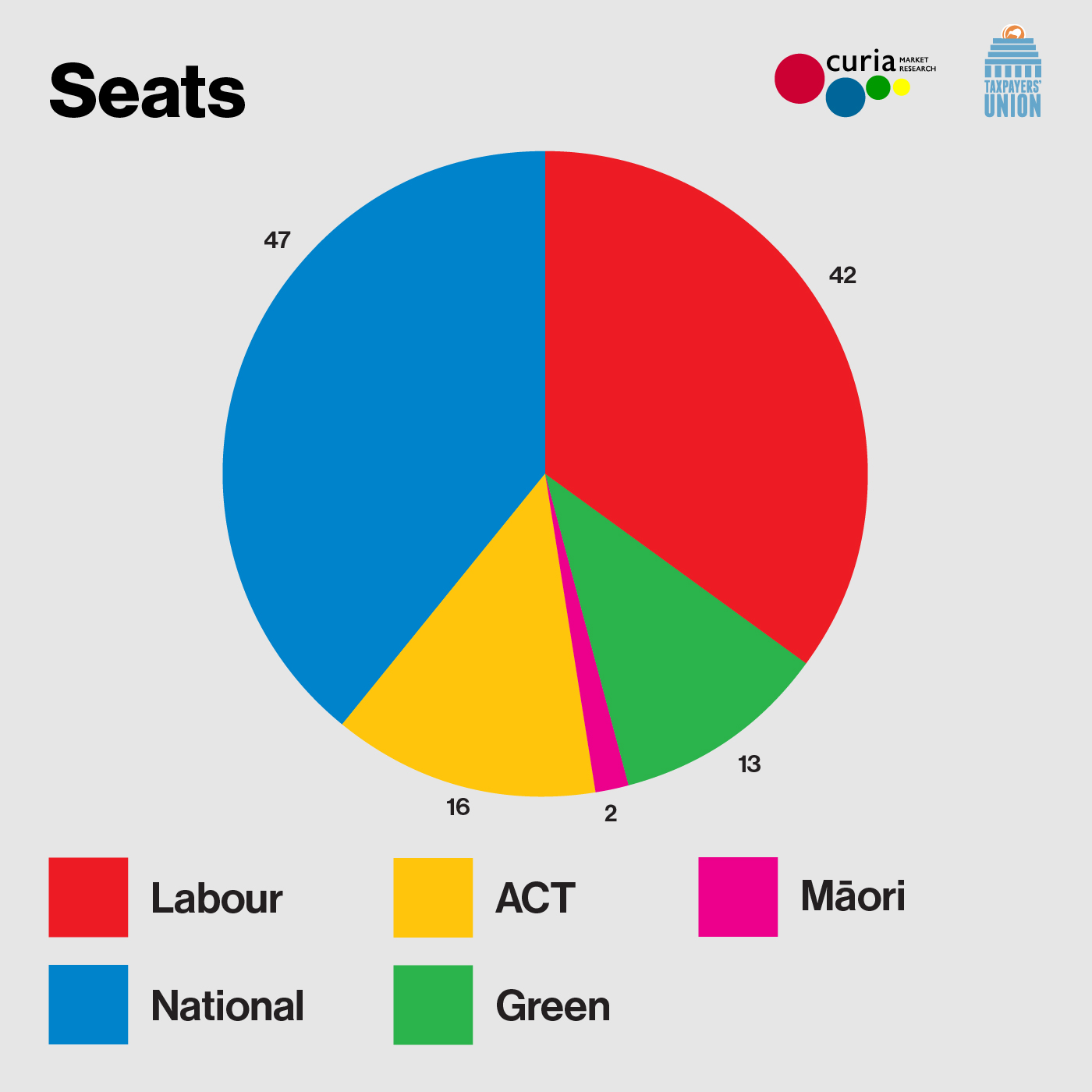 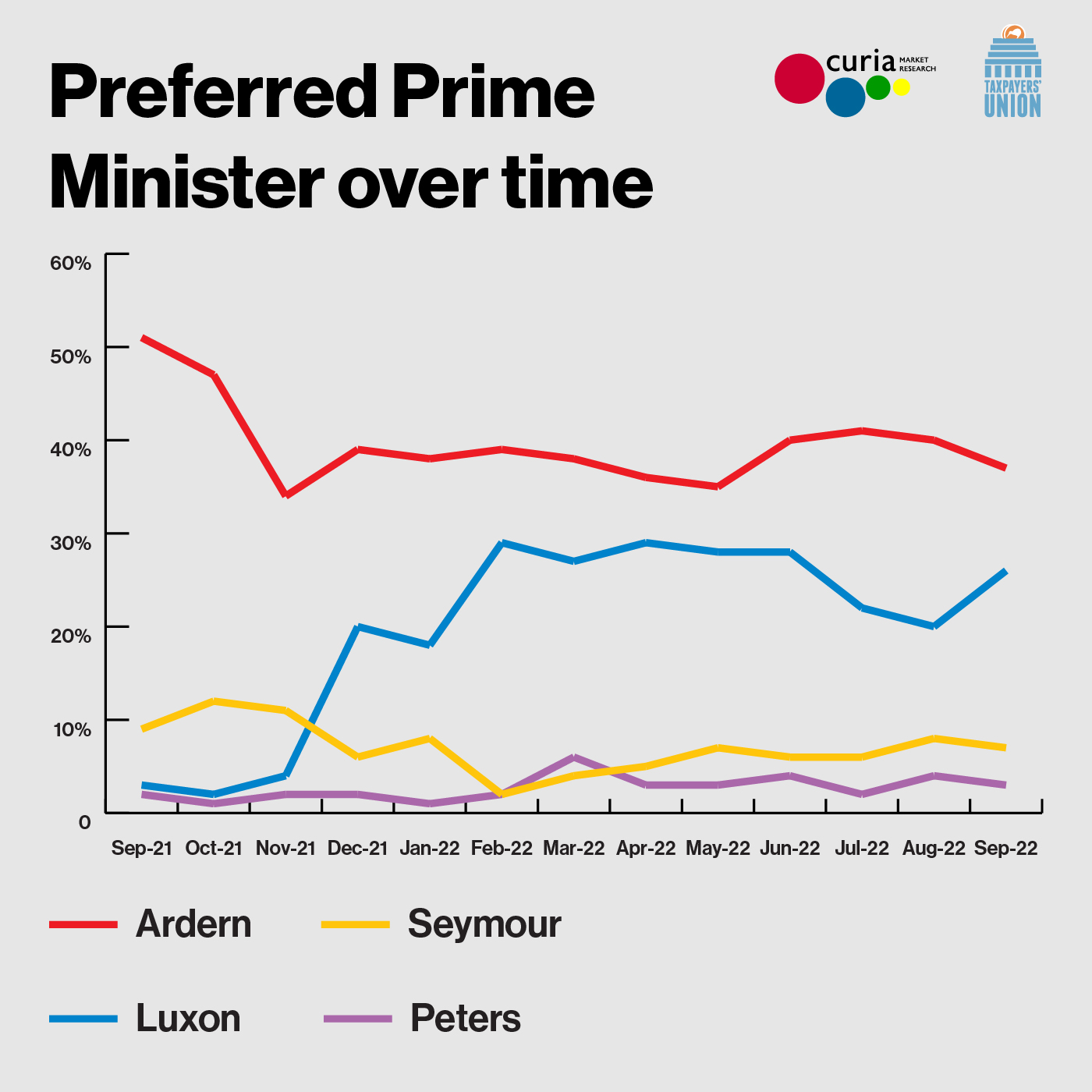 On preferred Prime Minister, Jacinda Ardern drops 3 points to 37% while Luxon bounces up from 20% to 26%. David Seymour is on 6.6%

Chloe Swarbrick is in fourth place as Preferred PM on a respectable 3.2%. Notably, that is higher than both Green co-leaders combined with Marama Davidson on 1.4% and James Shaw on 1.0%.

If ever you needed an example of the good life contracting for the Government, our research team have uncovered a doozy. Tatou NZ - a well-connected marketing agency - was paid $95,450 to “rebrand” the Government's "2025 Smokefree Action Plan".

We asked what the Government received for nearly nine years of income tax for the average worker. All officials could point to was a few pages of logos and instructions on how to use it. This isn't a new government agency: it's for what officials call a 'plan'. And taxpayers have paid for branding already! 🤦 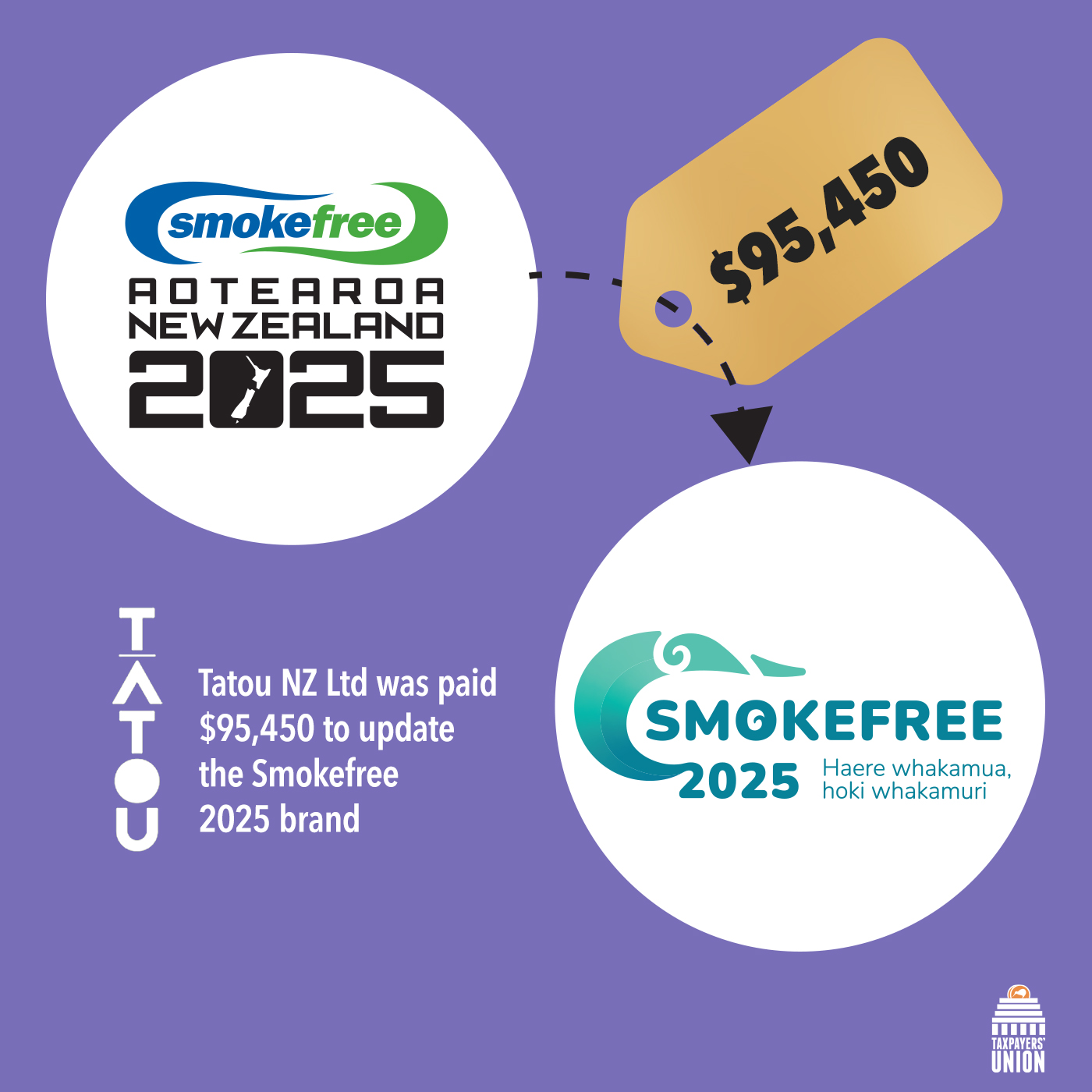 An invoice dated 21 February 2022 from Tatou NZ Ltd breaks down the costs as:

Nice work if you can get it!

Breakfast room service for one? 😉

Your humble Taxpayers’ Union continues to do what the media are not and regularly audits what Minsters and Beehive officials are spending your money on.

One of our student interns has dug out a mysterious "breakfast" at Boston Harbor Hotel belonging to someone who works for Minister of Trade, Damien O’Connor. While on a recent trip with the Minister, the staffer spent $100 (60USD) on a hotel breakfast.

But here's the thing – based on the menu (available online) – it appears the staffer was either one very hungry official, or our generous mandarin was ordering for two.

We asked the Minister's office who the other breakfast was for – but the Office refused to provide the information to protect the an official "from improper pressure or harassment" (section 9(g)(ii) of the Official Information Act allows for this as a reason for refusal to release official information). I've only seen this section used one other time since 2013.

We hear around the traps (but are unable to confirm) that our mysterious official was entertaining a new found friend on tour. Of course, no one objects to an overseas romance, but putting a Tinder date's breakfast on the taxpayer is rather raunchy. 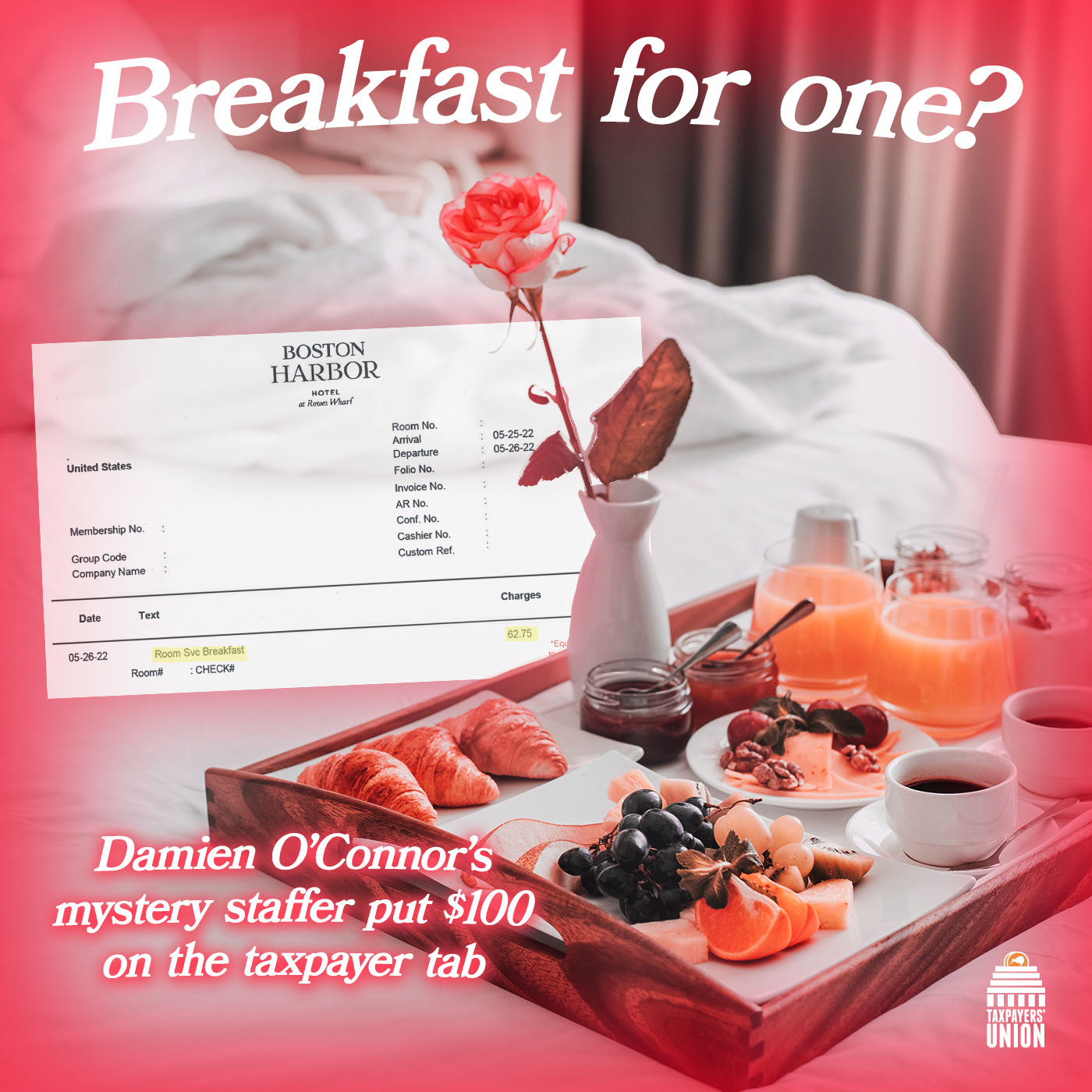 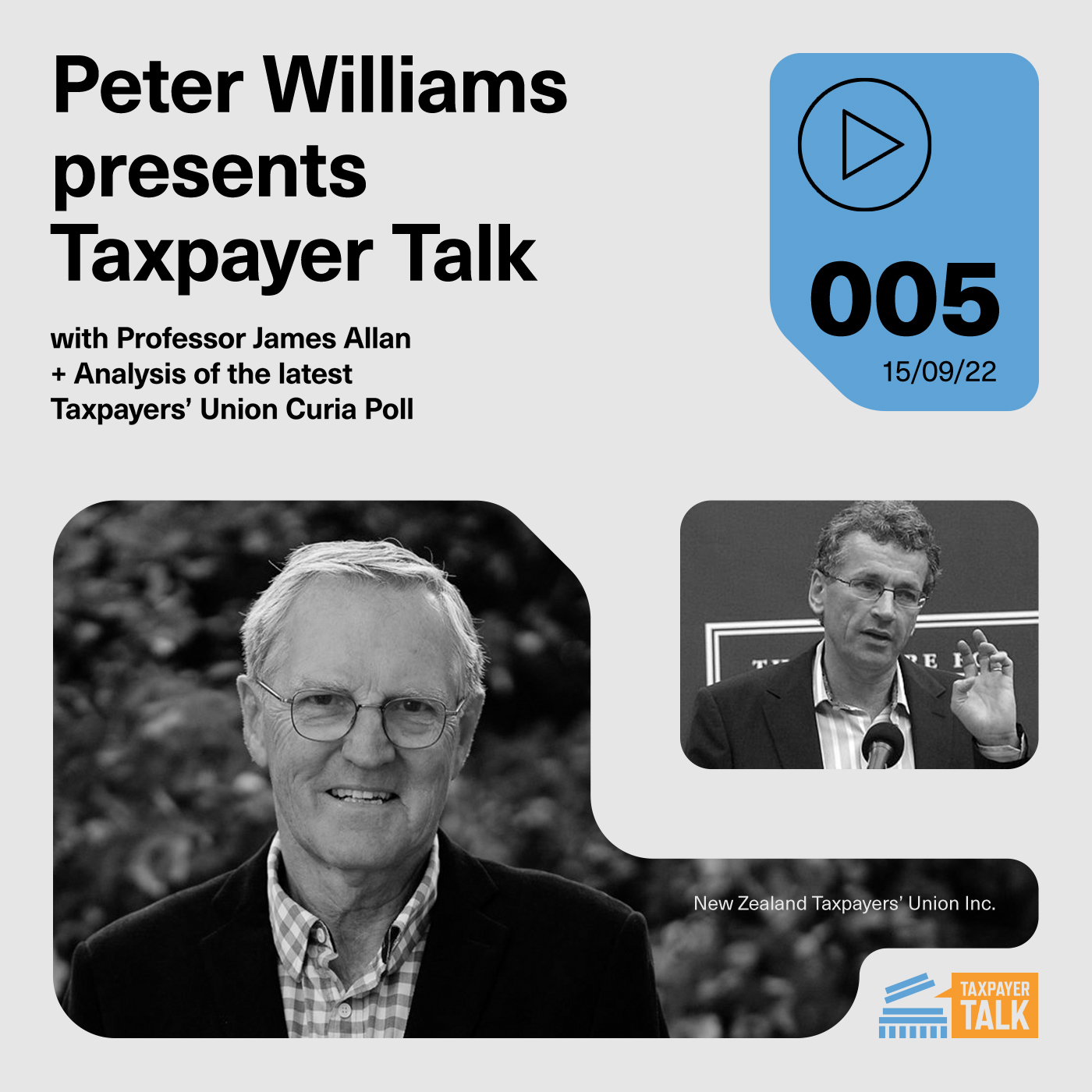 In the wake of the Queen’s passing, the latest edition of Taxpayer Talk focuses on the Monarchy and our constitution. Peter Williams interviews Canadian-born, Australian-domiciled law Professor James Allan who reflects on why the Commonwealth Monarchy is the most successful anywhere and why having a queen or king on the other side of the world as our Head of State is still the best system for New Zealand, and other Commonwealth realms.

David and I join Peter too to reflect on the political week and discuss the results of the Taxpayers' Union-Curia poll. Is luck finally running out for the government?

You can listen to the episode online here, or via Apple Podcasts, Spotify, Google Podcasts, iHeart Radio and where all good podcast are sold.

Stuff Should NZ follow the US example of forgiving student loan debt?