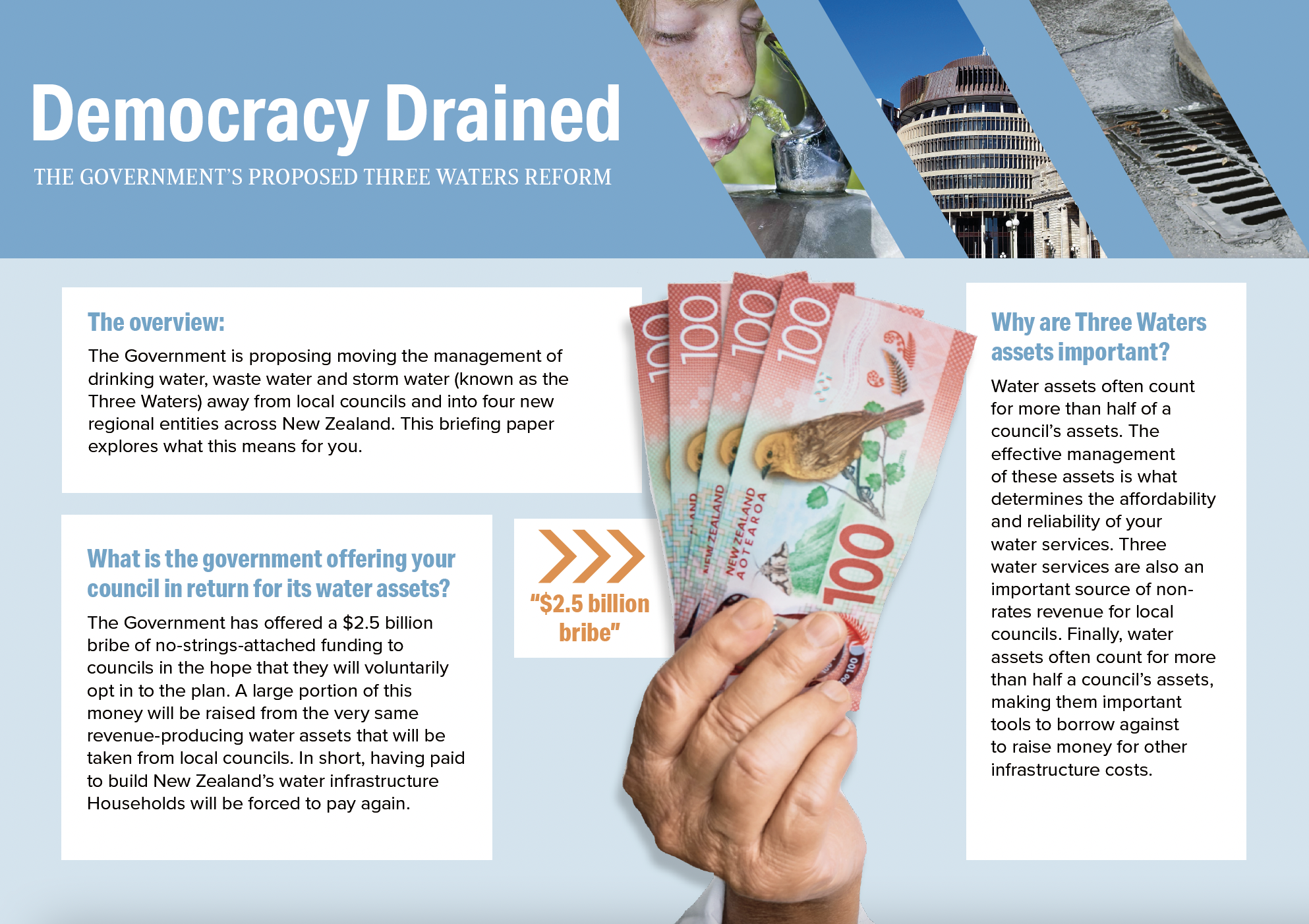 Over the last few months, we’ve been swamped with questions from supporters across the country about Nanaia Mahuta’s plan to reform “Three Waters”. She and her Cabinet colleagues want to take billions of dollars’ worth of drinking water, waste water, and storm water assets off the hands of local councils and put them under the control of four new unelected, co-governed entities. Those entities will be able to impose limitless water charges (i.e. tax) without the power of ratepayers to hold them to account.

While it’s unusual for us to defend the competence of local councils, the idea that unaccountable water entities co-governed with iwi are going to result in efficiencies is laughable.

Today we are launching our plan to defeat it by mobilising councils against this undemocratic asset grab. We're asking for two minutes of your time to email your local council to tell them to 'opt-out' of the Government's proposals, before it is too late.

Click here to use our new tool to quickly contact your local councillors and tell them to reject Nanaia Mahuta’s plan.

Here’s why Three Waters reform must be defeated

We’ve produced a briefing paper for New Zealanders to get up to speed with Mahuta’s Three Waters proposal. I’ve summarised the most alarming points below.

✖️ Four layers of bureaucracy will separate the new water entities from accountability to ratepayers.

✖️ Major decisions will require 75% majorities, so in effect, iwi will have veto rights over these decisions. That will hand unelected iwi groups the negotiating power to impose new costs on ratepayers such as water royalties – a payment for ratepayers’ right to use water.

Government spin on Three Waters has been appalling

The Government claims its reforms will reduce costs. But as councils up and down the country have pointed out, the financial modelling is based on error-ridden spreadsheets and unrealistic assumptions. Nor does the model take into account the financial implications of iwi control “co-governance”.

And even if the plan does reduce costs on councils, there is no guarantee savings will be passed on to ratepayers. Do you really trust your council to cut rates just because it’s no longer funding water services? On what we’ve seen, no council is planning on cutting rates for the money they might save!

It's crunch time: tell your Council to opt out before it is too late 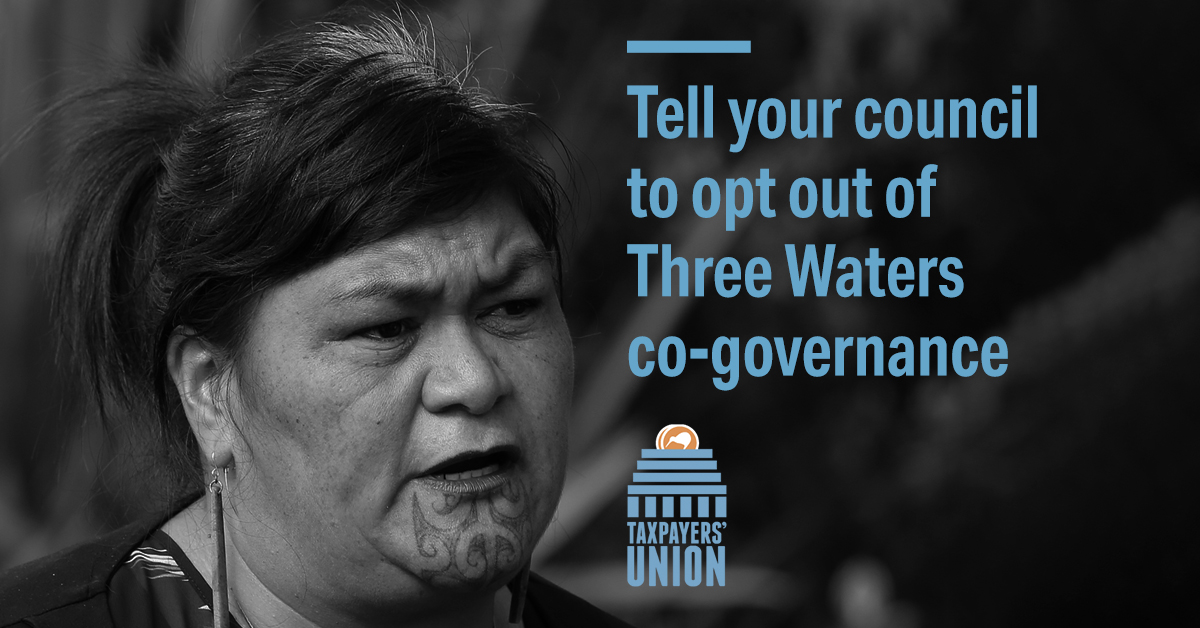 The Government is pressuring 67 local councils to sign away water assets without giving them time to consult with ratepayers. But despite a $2.5 billion funding bribe, most councils are suspicious of the reforms.

In a recent Taxpayer Talk podcast interview, Westland Mayor Bruce Smith stated that 35 mayors may oppose the reforms, including mayors of Auckland, Christchurch, Whangārei, and potentially Wellington. Those mayors have pointed out that the bribe money comes from the revenue produced by the very assets being transferred away from councils. You can listen to that interview here.

Councils have until Friday to formally tell the Government whether they will opt in or out of the scheme. That’s why we’re asking you to have your say and tell your Council now, before it is too late. Tell your local Council to opt-out of these reforms.

Will you take two minutes to tell your local councillors to reject Nanaia Mahuta’s plan?

By uniting New Zealanders and councils against the reform, we can deny Nanaia Mahuta the ability to claim a mandate for this asset grab.

What else can you do?

Firstly, you can forward this message to friends, family, and neighbours.

Secondly, you can sign and share our petition against Three Waters reform. This petition builds a database of New Zealanders who can be mobilised in the months to come in the likelihood that Parliament begins a legislative process.

Thirdly, you can boost the reach of this campaign by making a contribution to our war chest. There is power in numbers, and we will use your donation to extend the reach of our online ads, driving New Zealanders to our petition and email tool.