Our office was shut down for the holiday period, but we still managed to cause some mischief in Rotorua and expose even more waste from Creative NZ...

"Monument to waste ahead" in Rotorua

Remember Rotorua's $743,000 Hemo Gorge sculpture that ran three years late and still isn't finished? We thought it was such a good example of government and council waste that we hired an electronic billboard so the summer traffic knew what it was: 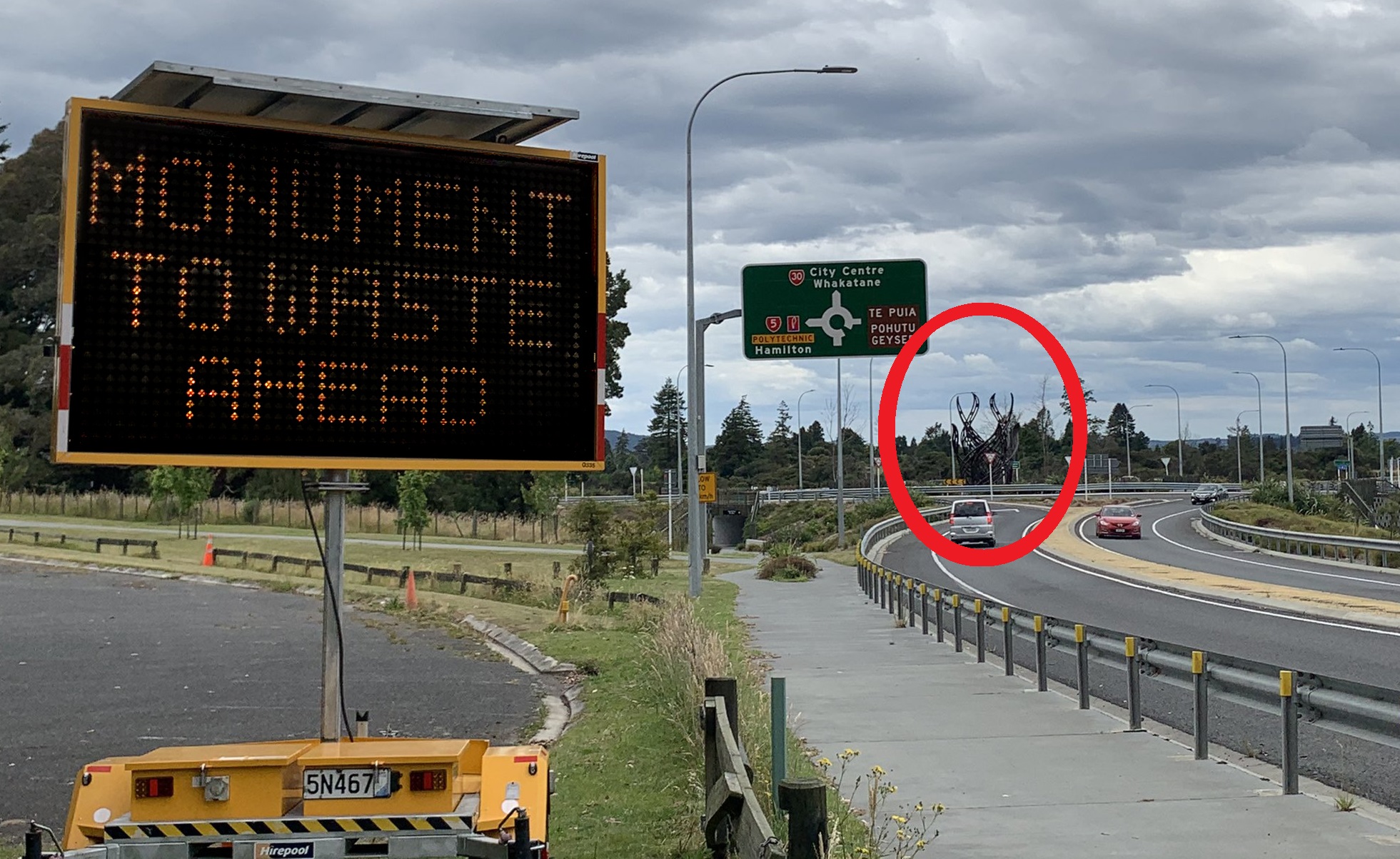 And in case the thousands of passing holidaymakers didn't get the message, some of our local supporters erected more signs at the site of the sculpture: 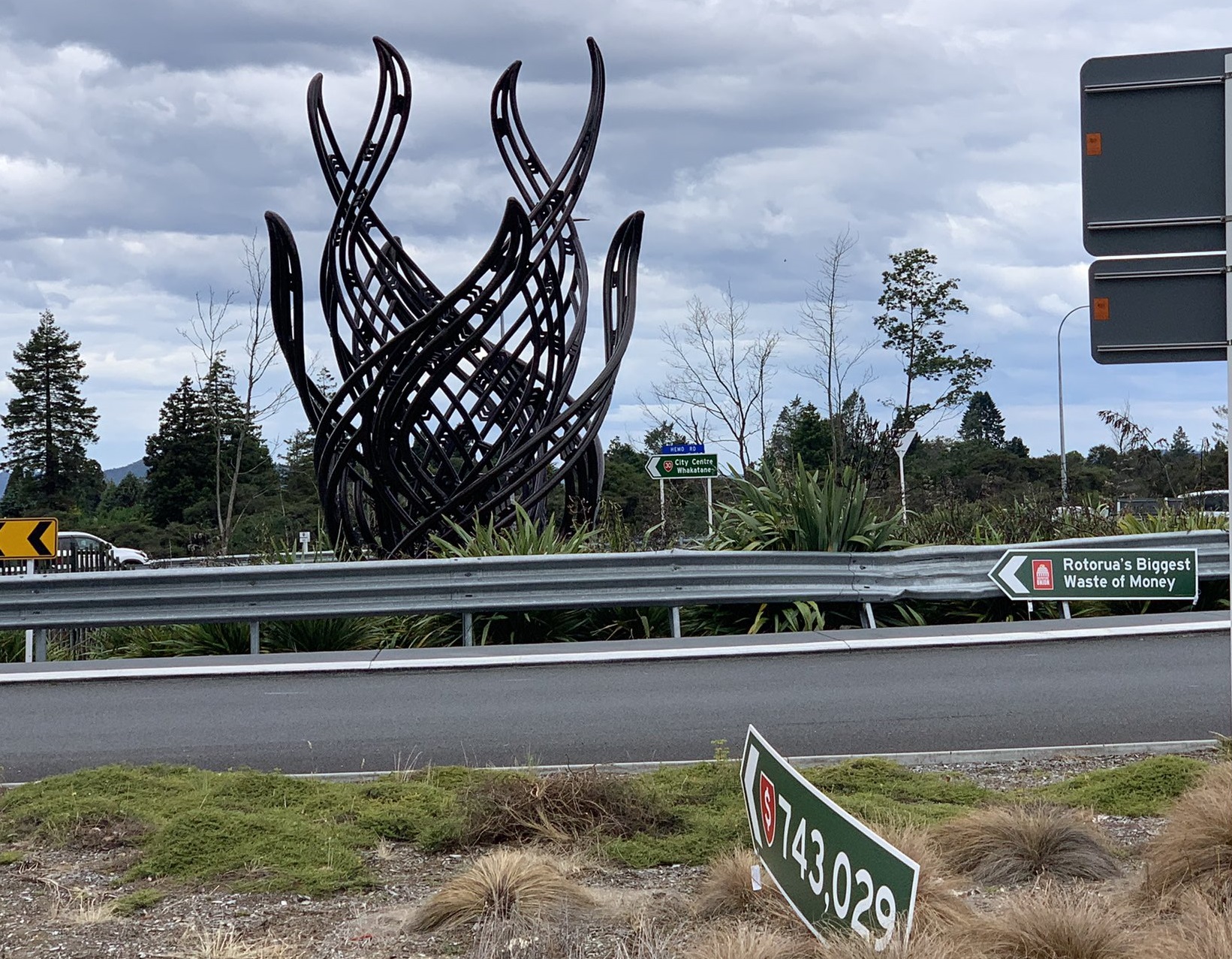 Remember, the installation of the sculpture ran three years late and $200,000 over budget, and the final bill is likely to be higher than $1 million once installation and lighting costs are counted.

What's worse, the final product looks nothing like the grand concept drawings — in fact, ratepayers and taxpayers can only see half of the sculpture because it's been erected below road level.

Unfortunately, it's not just Rotorua ratepayers footing the bill: the sculpture was co-funded by NZTA, meaning we all paid for it!

Our signage received coverage in The Waikato Times, the Rotorua Daily Post, and on Magic Talk. 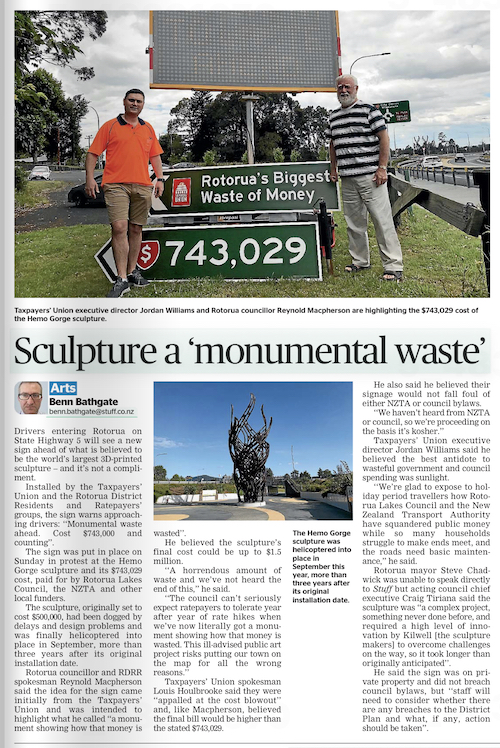 NZTA even complained to local media that the signs could distract drivers. Our response: it was NZTA that installed a behemoth sculpture in the centre of a busy roundabout. You couldn’t get more of a distraction than that! After the faux outrage and threats to remove the sign, they've since backed down. 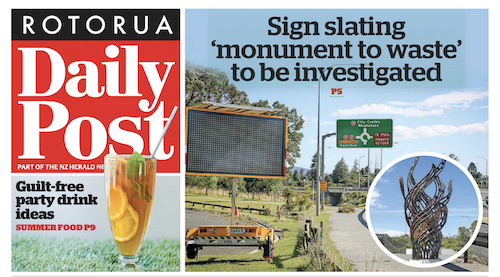 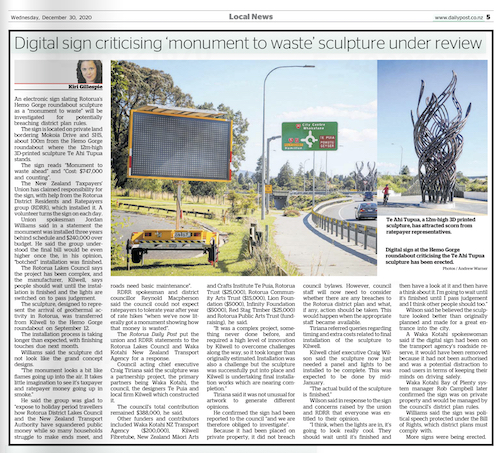 The Mayor responds: it's OK as the overrun is just NZTA money!

Following Jordan’s interview on Magic Talk, Rotorua Mayor (and former Labour MP) Steve Chadwick was forced to respond. She said the cost overrun was a “storm in a teacup” as the reason the monument went over-budget was because it was so complex and groundbreaking! She also said that our group was wrong to complain because the Council’s contribution was fixed — most of the overrun was covered NZTA (i.e. taxpayers!).

Listen to the interviews (and the resulting talkback) here.

Finally, a big thank you to Reynold Macpherson (a local councillor, Taxpayers' Union member, and representative of Rotorua District Residents and Ratepayers) who protected the electronic message board from tampering by irate supporters of the sculpture Council!

But wait, there's more. Last month Creative NZ released the year's fourth round of Arts Grants. Taxpayers forked out $50,800 for events about "radical fat positivity", $57,000 for "a play about the COVID-19 pandemic", and $39,930 for "a new app-driven immersive theatrical experience". 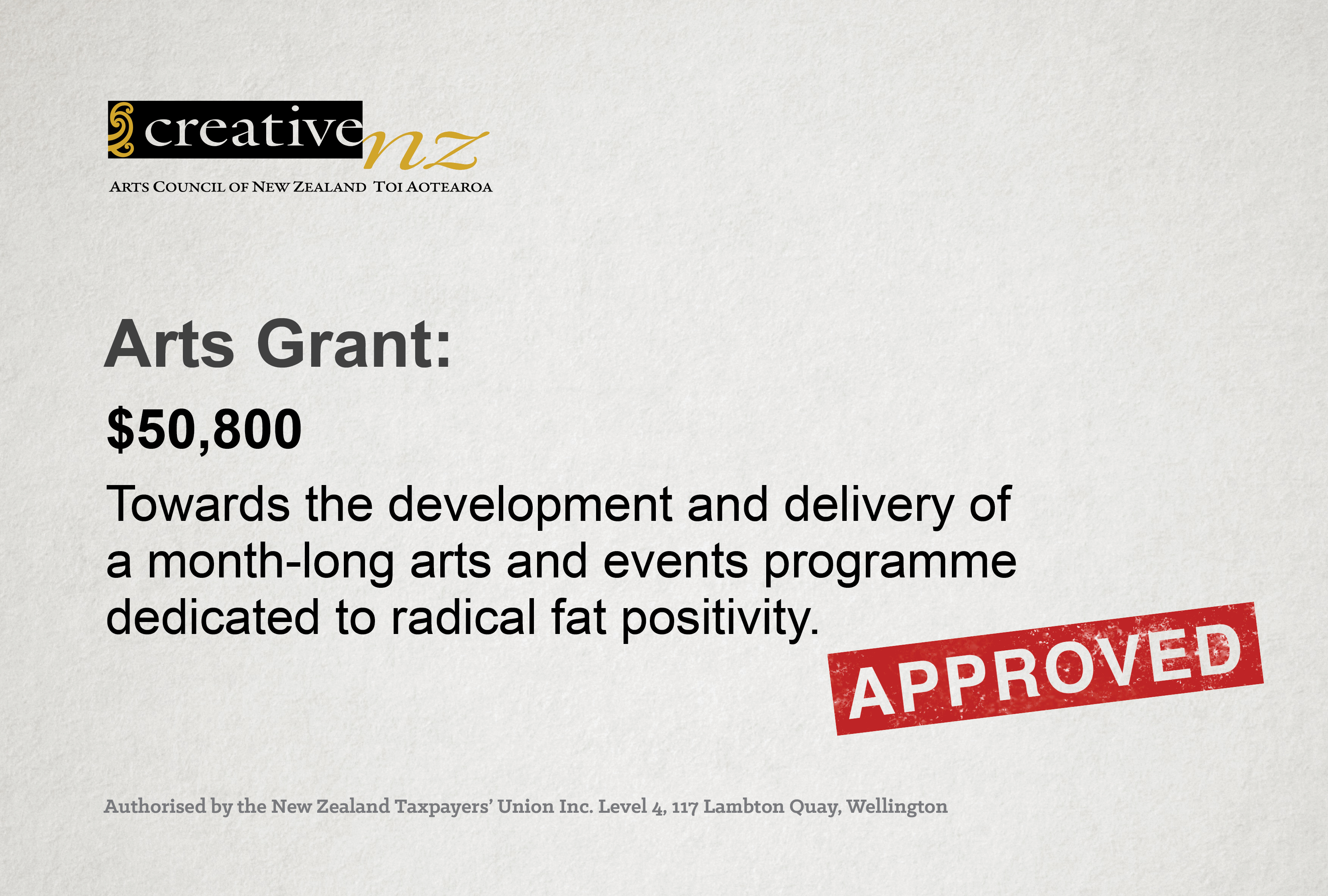 And that's just the tip of the iceberg. Creative NZ has been handing out far larger grants under its new Adaptation Fund, which has handed out $6.78 million, supposedly in response to COVID-19.

The single largest grant was a massive $1 million for the Fa'a Black Grace dance troupe, to deliver "an immersive dance experience in a non contact world."

That's more than the average Kiwi's tax bill for an entire lifetime.

[One more point: some of Creative NZ's defenders have claimed this is Lotteries money, not taxpayer money. They're wrong. While Lotteries has historically been the key funder of Creative NZ, Jacinda Ardern gave the agency a massive top-up in funding last year, so most of its money now comes directly from the Government. Regardless, Lotteries is still a public body and ought to spend its money more wisely.]

On Boxing Day it was reported that the cost of salaries in the public sector has increased by 13 percent in just one year.

Funneling ever more taxpayer money into the state sector is not sustainable, necessary, or fair. It's outrageous that government agencies are padding their own salaries while families and businesses cut costs in the wake of a pandemic.

Public sector staff are paid significantly more than private sector workers, and the pay gap is increasing. It's not enough for a few state sector bosses to take temporary pay cuts: pay cuts need to go wider and deeper.

Taxpayer Talk: What do our new MPs stand for?

One third of the new Parliament is made up of new MPs, and you deserve to know who they are and what they stand for.

That's why we're releasing new episodes of the Taxpayer Talk podcast, in which Neil interviews the new politicians.

Get to know ACT MP James McDowall here, or listen to our interview with fellow ACT MP Damien Smith here. National MP Simon Watts is next up.

You can find all of our podcast episodes here (or look us up on Spotify, iTunes, or wherever you find good podcasts).

Kapiti and Coast Independent  KCDC — Is This NZ’s Greatest ( ie Most Expensive) Council?