Will Winston put the kibosh on the Ihumātao deal? 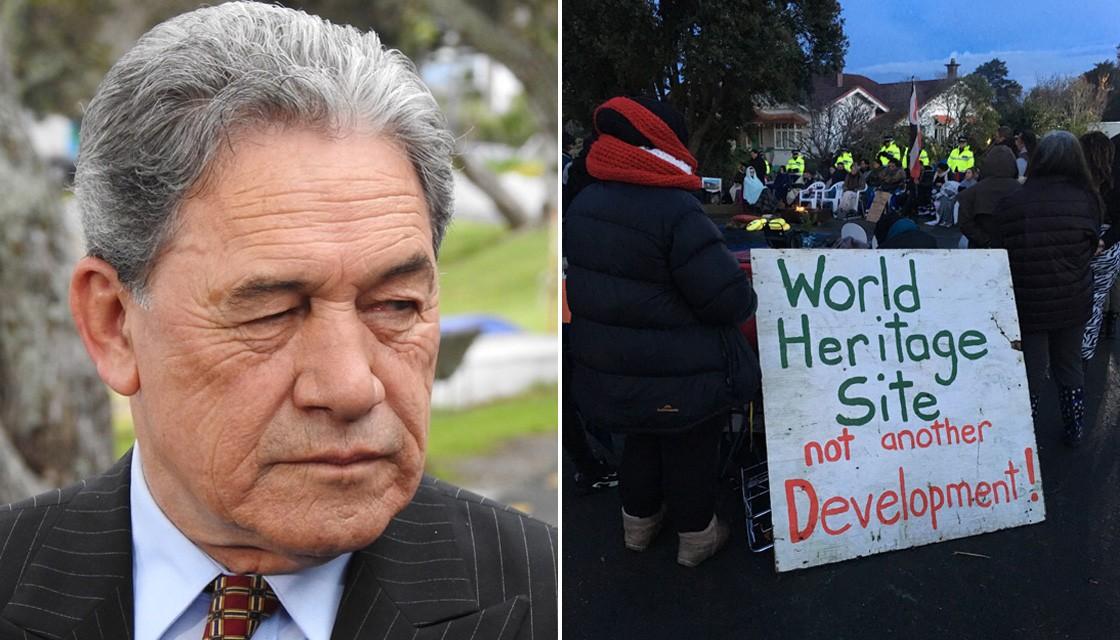 After months of delays, it's been reported again that the Government is on the verge of purchasing the land at Ihumātao using $30 million of taxpayer money.

This would be a disgraceful capitulation to illegal occupiers.

However, we understand that New Zealand First Leader Winston Peter is furious about the deal and had a tense exchange with the Prime Minister on Tuesday night. He has the power to block the deal at the 11th hour and gain huge publicity.

Jordan texted Winston yesterday to remind him of our petition against the deal, which has 11,000 signatures. We're watching very closely. 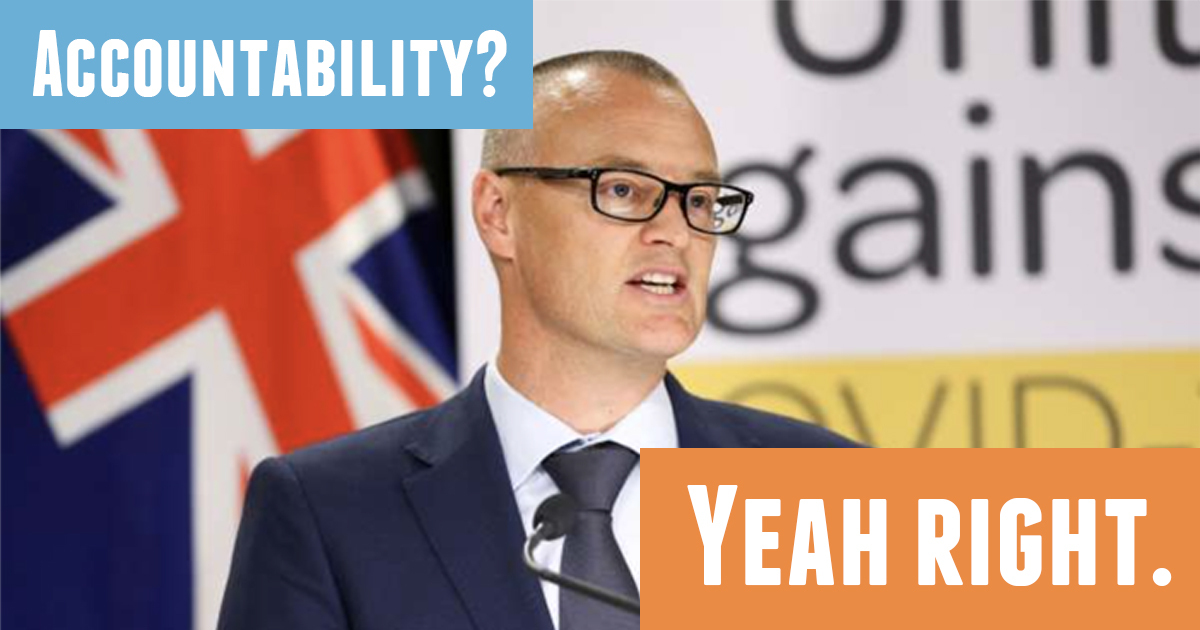 Health Minister Dr David Clark was missing in action for virtually all of the COVID-19 pandemic after repeatedly breaching his own guidelines by travelling unnecessarily, mountain biking when that was forbidden, and moving house and his office at the exact time he was requiring people to stay home and work from home.

And now he's overseen a series of quarantine failures: most spectacularly, the two COVID-19 positive women who were allowed to travel the length of the North Island without being tested.

In fact, 51 out of 55 quarantined individuals released under compassionate exemptions were not tested. That is disgraceful and Dr Clark has accepted no responsibility.

He's now been shunted away from the media, with Megan Woods brought in as a "Dr Fix-It". Why keep David Clark on a $300,000 salary?

We've launched a petition calling on the Prime Minister to immediately sack the Minister for his repeated failures in response to the COVID-19 pandemic.

We're glad to hear that the posters of Jacinda Ardern plastered across the country have been taken down while the Electoral Commission investigates whether they count as election advertisements.

The posters are clearly advertisements: by the artist's own admission, they are drawn in a "propaganda style" and are inspired by the famous "Hope" posters of Barack Obama.

This means they need a promoter statement and should fall within election spending limits.

If the Commission finds that the posters are legit, we'll be surprised, but it means we can crowdfund our own poster campaign. Our posters could look like this: 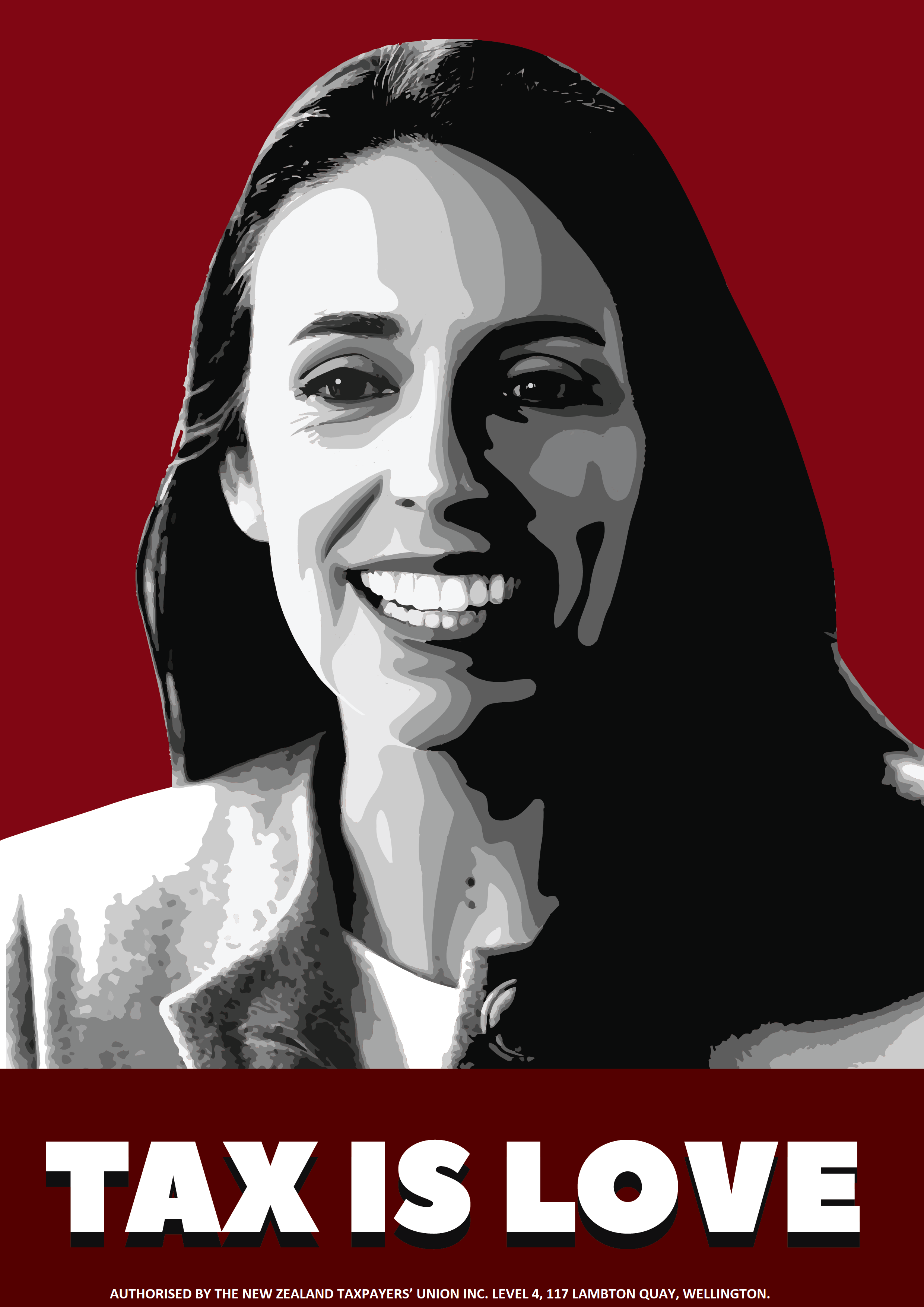 This is what leadership looks like. Horowhenua District Council hasn't just frozen rates – it's cut them by 1.83% in response to COVID-10 hardships.

The Mayor and his officials wanted higher rates, but six out of eleven Horowhenua Councillors seized their democratic responsibility and put the interests of ratepayers first.

Yes, the Council will have to cut employee costs and sacrifice spending plans, but it’s a necessary sacrifice that reflects the cut-backs being made in households across the country.

Ultimately, this move will make Levin and surrounding areas better off. More money in ratepayers’ pockets means more demand for local goods and services. And ratepayers from other parts of the country will be looking on in envy – perhaps even considering a move!

Is your local council hiking rates? Contact them NOW and tell them what Horowhenua District Council has done.

Petition launched: Keep it The Tron! 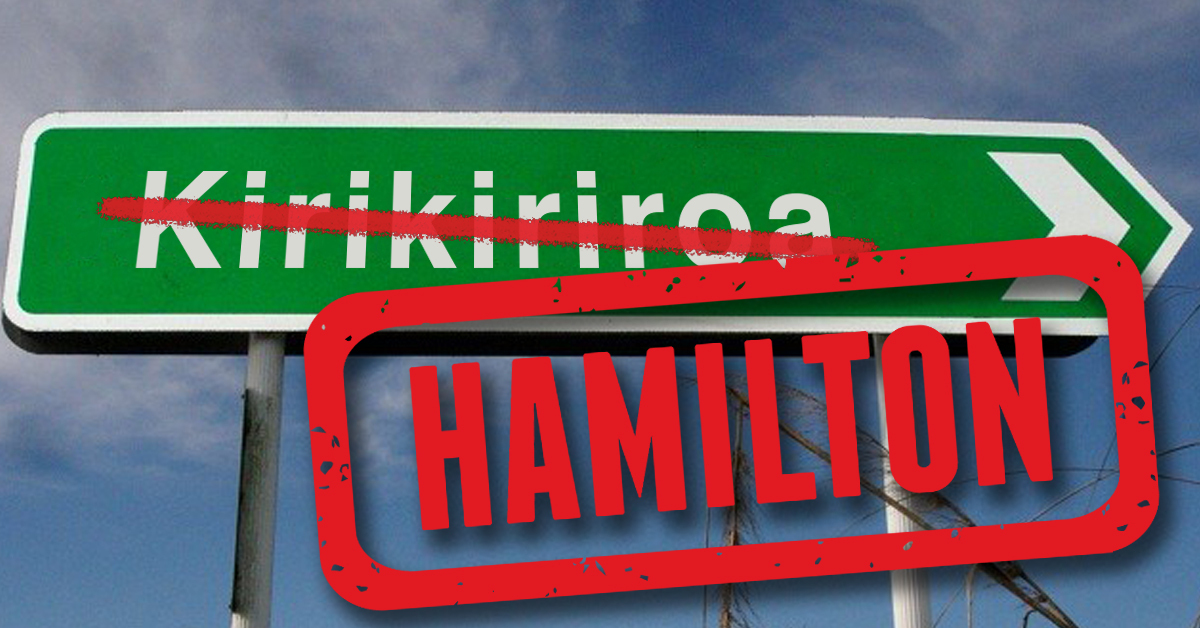 As if New Zealand doesn't have bigger issues to debate, Newshub, Stuff, and RNZ are all reporting on calls to change the name of Hamilton to "Kirikiriroa".

If the Council considers a name change, it will mean a divisive consultation process, a potential referendum, ratepayer-funded revamps of branding and signage, and staff and councillors' time wasted.

The change would then be considered by the New Zealand Geographic Board, meaning taxpayers across the country cough up.

We say Hamilton City Council should ignore the vocal minority and stick to their core business of delivering value for ratepayers.

There's also the suggestion the Council could go for a "compromise" option of a dual name. Based on previous government and council rebrands, we can imagine the new council logo looking like this: 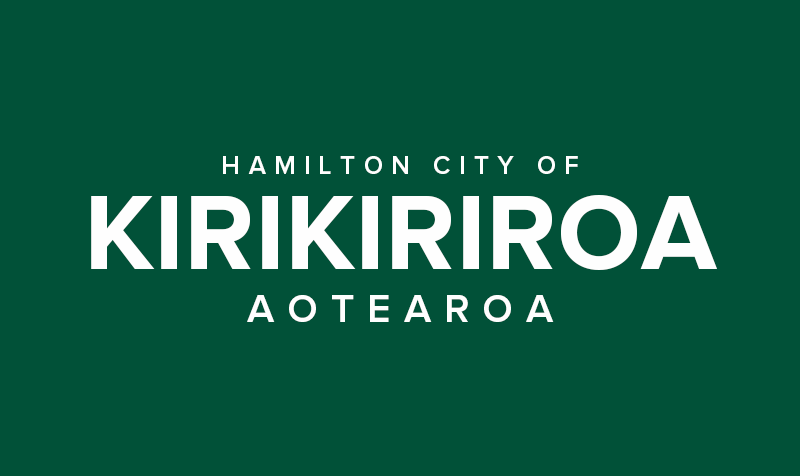 As if that will make anyone happy! 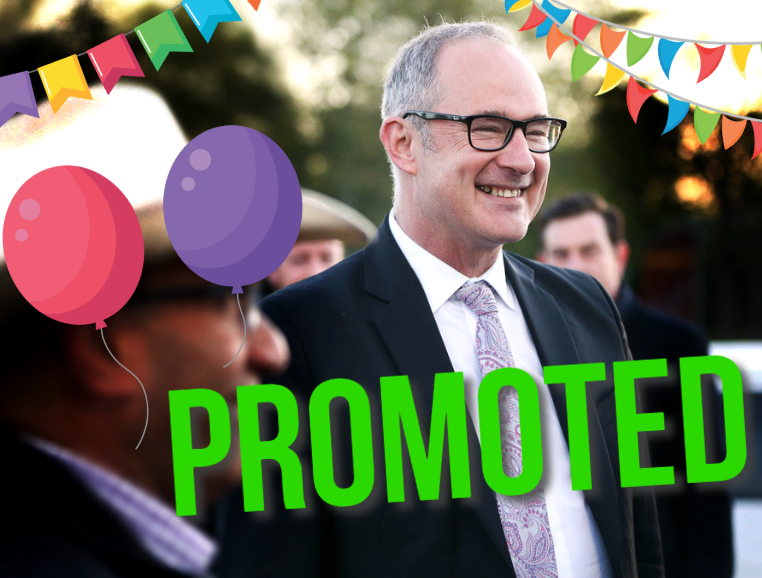 We were astonished to see Phil Twyford moved from #5 up to #4 after his calamitous management of KiwiBuild, and more recently, his total failure to deliver his Auckland tram project.

(In fact, Twyford has now confirmed he's given up on Auckland Light Rail this side of the election. That project was the main reason for increased fuel taxes, so why is he planning to hike fuel tax again on 1 July?!)

For fun, I also researched Labour's lowest-ranked candidates. At the very bottom, #84, is a teacher unionist named Georgie Densey. Her Twitter page has one post, where she shares this praise of Metiria Turei:

How would this look on a billboard?

National MP Nick Smith has revealed that Parliament's architecturally designed playground – which is basically just a slide and some stepping stones – went $172,000 over budget.

All up, the design, construction, landscaping, and engineering fees totalled $572,000. 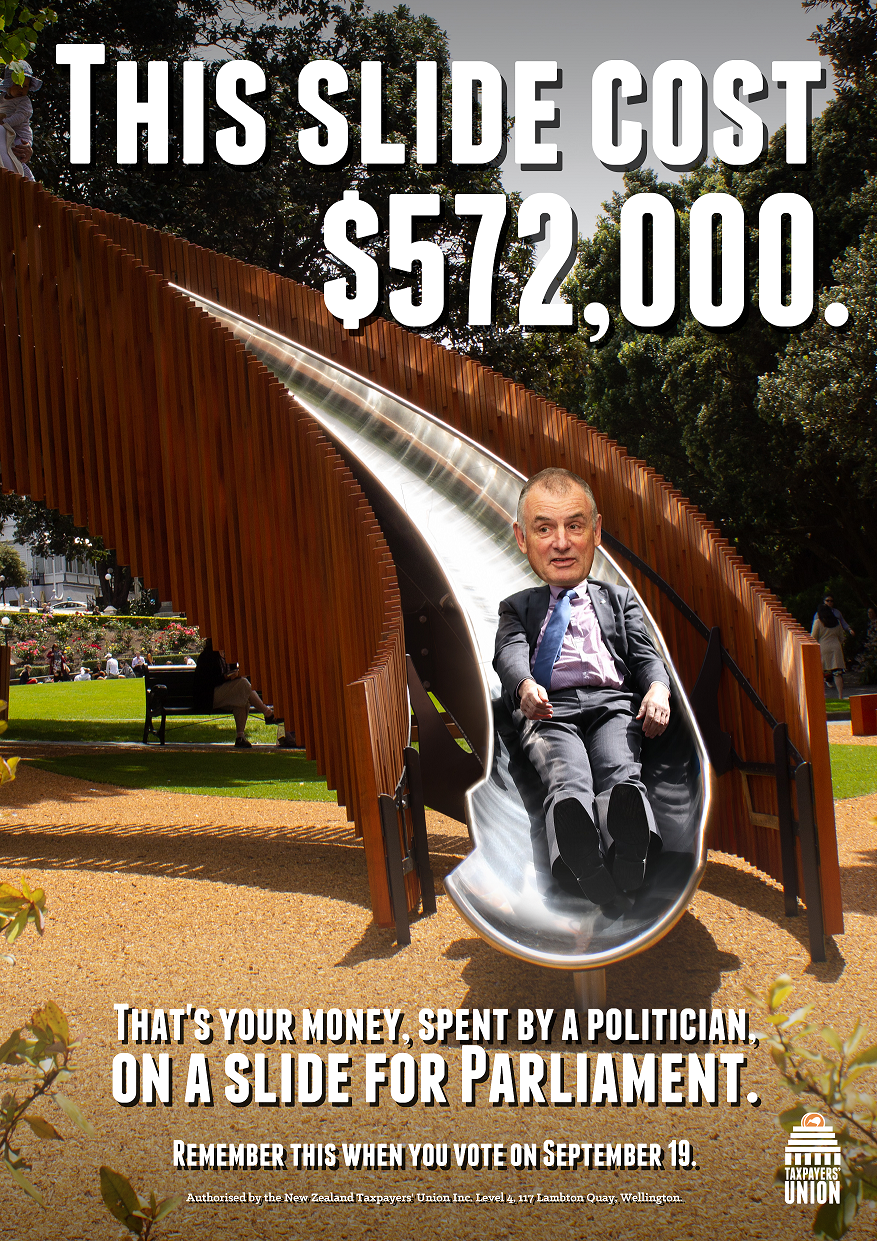 We plan to make taxpayers remember this kind of waste when they cast their votes on 19 September.

Newshub  'Forget about tax cuts': Economist warns of hikes ahead no matter who wins election