⛽️💸 Our campaign for fuel tax relief pays off 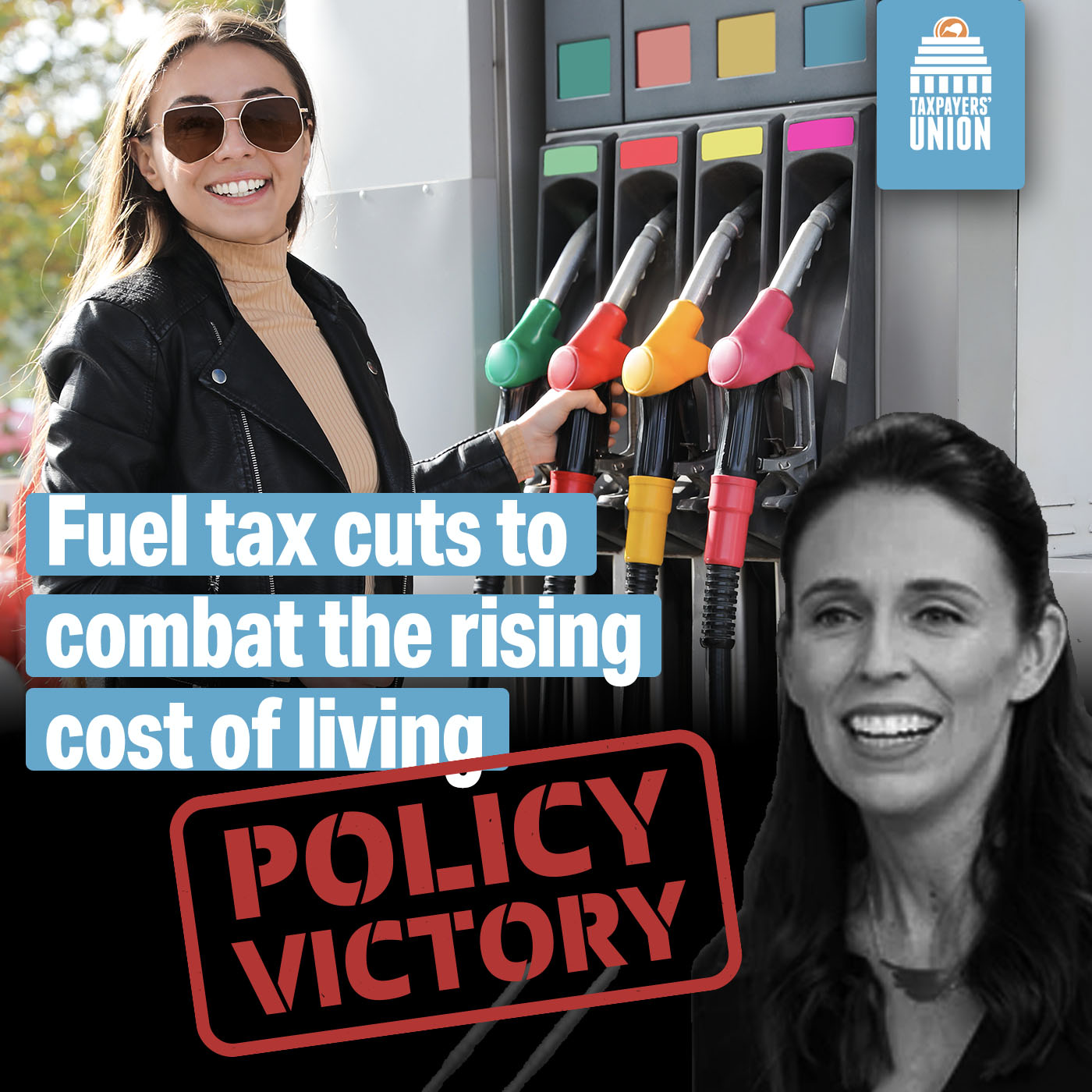 The Prime Minister has read the room and responded to spiking petrol costs with a $0.25/litre reduction in fuel excise tax, lasting for at least three months.

Pulling the excise lever is exactly what we have called for – and while a 25 cent tax cut is modest, it actually goes further than what the National Party has proposed.

Here's yesterday vs today at BP in Brooklyn, Wellington: 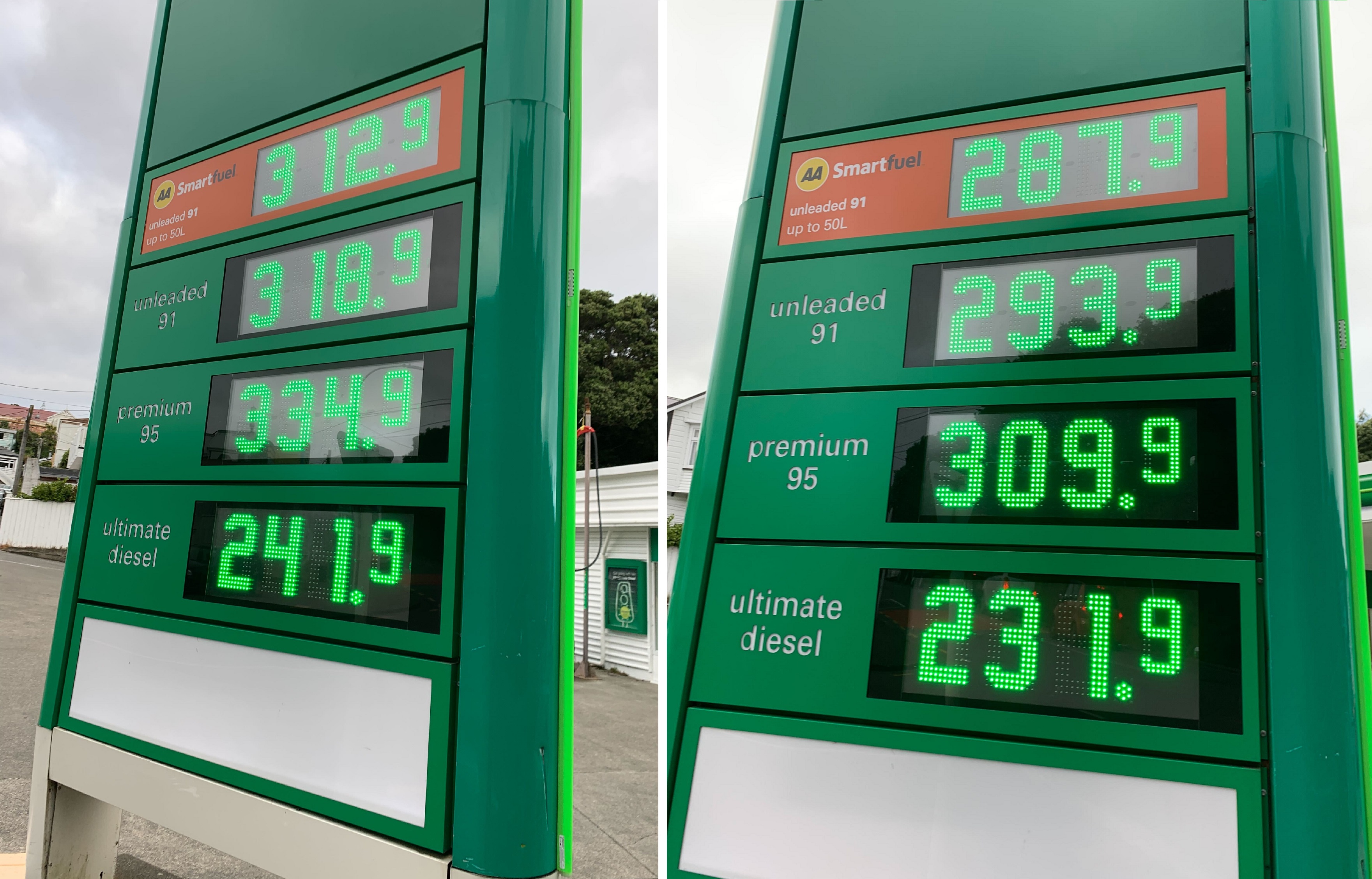 This move is not a silver bullet for the cost of living crisis, but it does acknowledge the responsibility the Government has to limit its own contribution to household costs.

And Taxpayers' Union supporters have plastered stickers on fuel pumps and even their own vehicles: 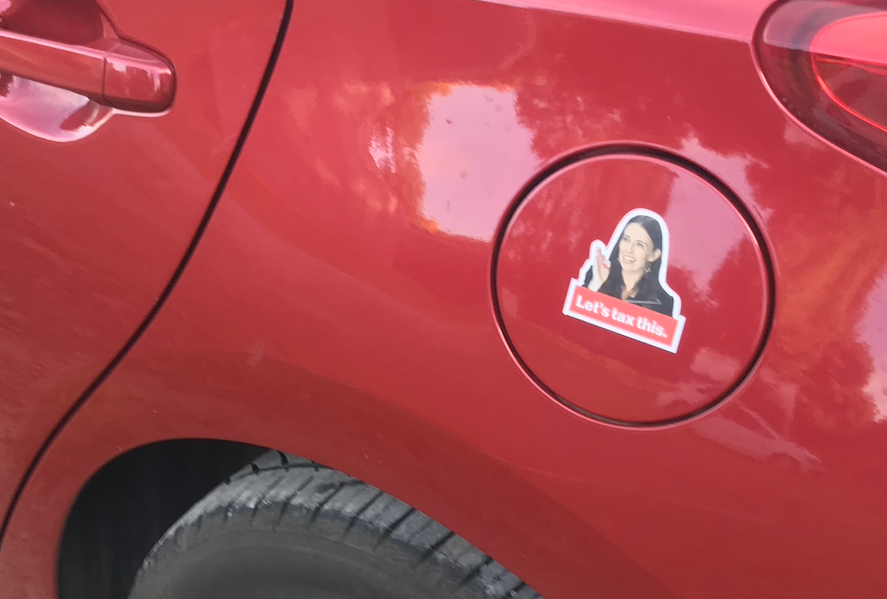 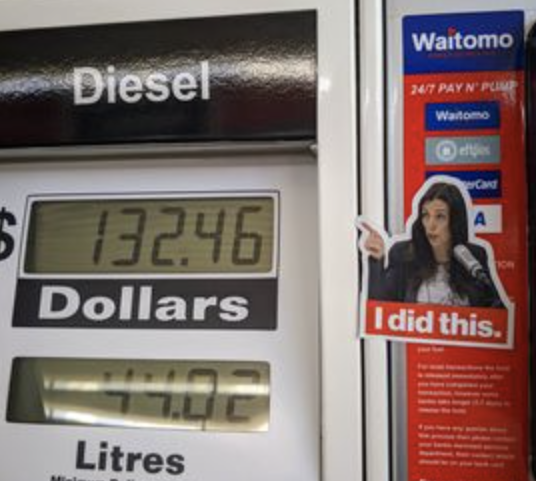 (We cannot encourage putting stickers on fuel pumps. But it is funny.)

Of course, the fuel tax cut will limit funding available in the National Land Transport Fund for transport projects. Grant Robertson says he will divert money from his COVID slush fund to make up the revenue loss, but for longer-term tax relief he will need to stop raiding fuel tax revenue for cycleways, urban beautification, and other projects that don’t benefit the motorists paying the bills.

What about the other taxes on fuel? 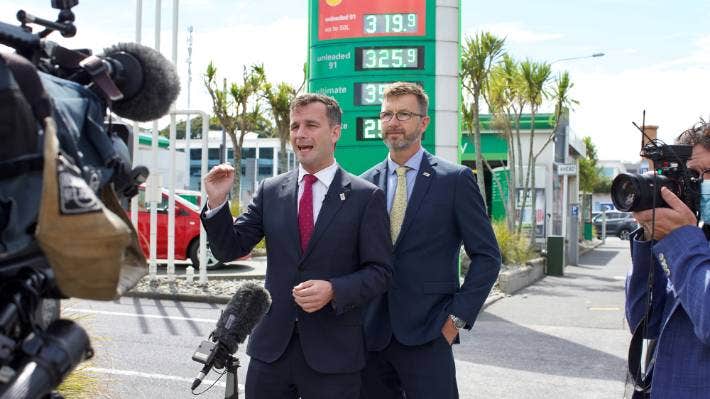 Our fuel tax campaign has focused on the excise tax because the Government directly sets the excise tax rate. But excise isn't the only tax on petrol.

Emissions Trading Scheme levies now make up 18 cents on every litre – and the cost is set to increase as the Government releases fewer carbon credits to the market.

The Government uses revenue from ETS levies for its "climate emergency" slush fund, paying for pet projects such as cycleways and urban beautification. (Regular readers of our newsletters will understand that these projects do not actually cut emissions, because emissions are already capped and traded under the ETS.)

The thing is, the ETS was never meant to be a money-maker for the Government. It is simply meant to incentivise companies and households to cut emissions in cost-effective ways.

ACT has now announced a policy to return all ETS levies to taxpayers as an annual "carbon dividend", working out at $749 for a household of four – a policy we've been calling for. A carbon dividend would preserve the incentive effects of the ETS while removing the net cost to taxpayers.

Is Nanaia Mahuta cracking under pressure? 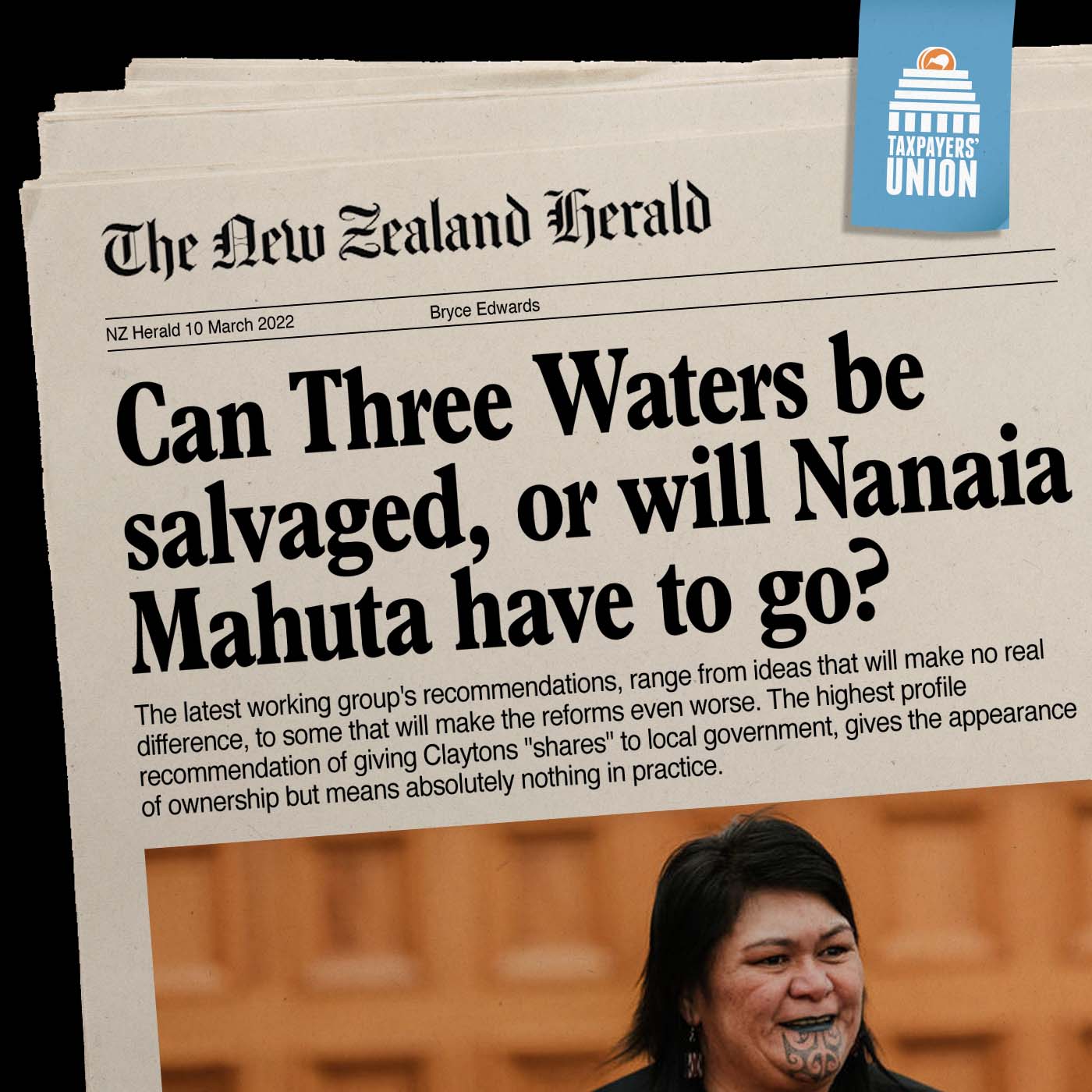 Nanaia Mahuta's latest attempt to pacify critics of Three Waters has failed. The 47 recommendations from her "Working Group" will only serve to add complexity and cost to the scheme.

Now commentators from Stuff, the NZ Herald, and TVNZ are openly asking whether she should still be fronting Three Waters. As Bryce Edwards writes in the Herald:

the Government may wish to have her out of the portfolio before the local government candidates begin their campaigns, which will surely utilise opposition to Mahuta and Three Waters, setting up an early warning of what Labour might be facing in 2023.

For more evidence that the Government and Nanaia Mahuta have been spooked by our efforts to stop Three Waters, look at this interview from the weekend.

Nanaia Mahuta isn't known for admitting she's wrong, so it's telling that she now admits she botched the communications campaign that saw $3.5 million spent on condescending TV ads.

But she's still standing by the Three Waters scheme as a whole, including the co-governance arrangements that will dilute accountability and open the way to water royalties (charges for the right to use water).

Thank you to the thousands of New Zealanders who have now chipped into our court action fund and general Three Waters campaign fund. 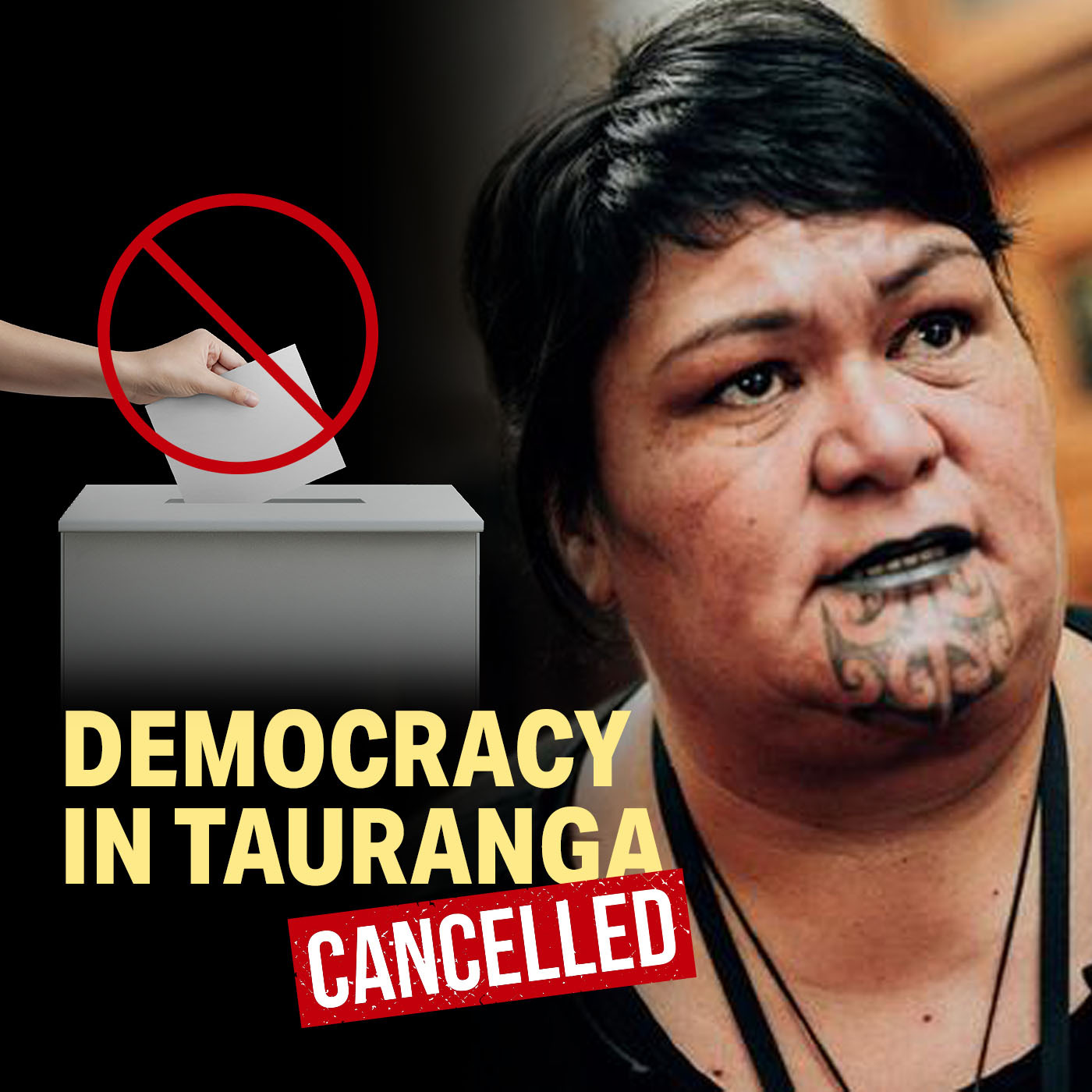 At the Taxpayers' Union, we oppose Three Waters because it is a bad policy – it takes assets away from local control and puts them in the hands of massive co-governed water-entities, separated from ratepayers by four layers of bureaucracy.

However, it is becoming increasingly obvious that there is another reason why Three Waters is so unpopular: New Zealanders simply don't trust Nanaia Mahuta to protect democratic values.

Last week, we saw exactly why Mahuta isn't trusted. As Minister of Local Government, she announced she's cancelling next year's elections in Tauranga, with Wellington-appointed commissioners continuing to run the Council until 2024.

Mahuta’s decision in 2020 to dissolve the council in Tauranga resulted in a Wellington-appointed, co-governed commission pushing through a 17 percent rates hike. Why should we expect her unelected, co-governed water entities to deliver anything better for ratepayers?

Our friends at the Tauranga Ratepayers' Alliance are running a petition to restore elections: click here to sign the petition.

We can reveal that 316 foreign entertainers, including 64 DJs, were fast-tracked through MIQ in 2021.

Taxpayers have spent $1.2 billion on MIQ – $660 for every household in the country. And while the regime is winding down for Kiwis, the "lottery of human misery" continues for international visitors.

As reported by the Herald, we received an official information response showing how many entertainers were given border exemptions under the "other critical worker" criteria last year:

This reinforces the view that the Government's criteria for border exemptions was and is a complete shambles.

Techno performers like DJ Dimension and Dom Dolla hogged rooms in MIQ facilities while Kiwis were barred from seeing their families. Even essential workers were unable to enter the country, including hundreds of nurses. One Kiwi nurse was denied an MIQ spot eight times, and eventually resorted to sailing to New Zealand from Australia.

The justification that these entertainers brought a "significant wider benefit to the national or regional economy" just doesn't stack up. Last year we suggested that a more productive (and taxpayer-friendly) approach to MIQ slots would be to release a limited number of slots to foreigners that would be allocated to the highest bidder. This would naturally prioritise high-value visitors and also provide a revenue stream to recoup the massive costs of MIQ.

In his State of the Nation speech, National Party leader Christopher Luxon unveiled this proposal to adjust income tax brackets for the last four years of inflation: 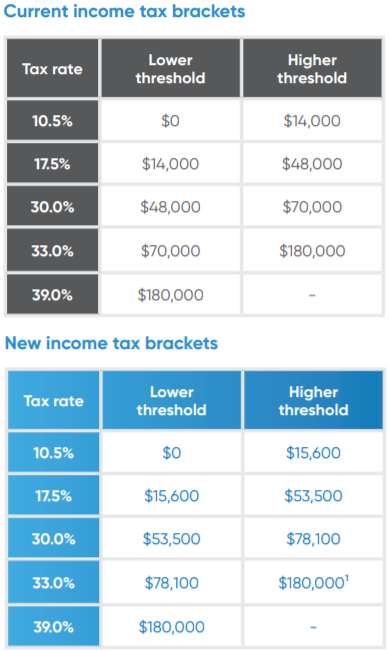 This small adjustment to tax brackets is more of a 'tax reset' than a genuine tax cut. And even as a tax reset, it's a weak one.

We would suggest a more substantial reset: update tax brackets to make up for inflation for the full decade since the brackets were originally set, not just the last four years.

The political merit of Christopher Luxon's proposal is that it is so modest that even a Labour Government has little excuse to reject it. This policy would barely scratch the sides of the Government's $6 billion spending allowance.

Will National present a stronger tax policy before the election? 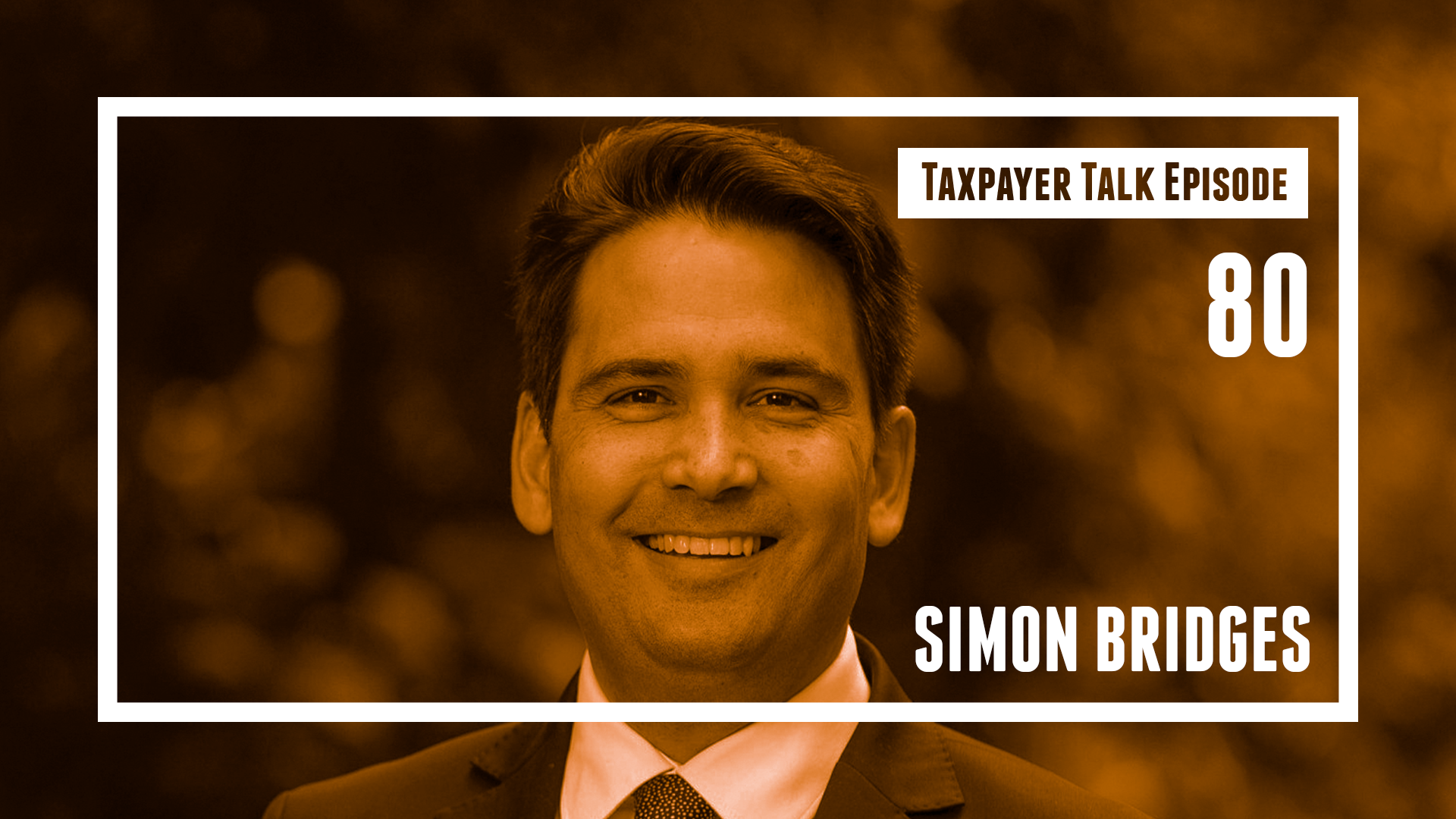 I sat down remotely with National Party Finance spokesman Simon Bridges for a discussion on bracket creep, Labour's new taxes, and whether we can expect more substantial income tax relief from National before next year's election. Click here to listen.

(Note: the interview was recorded before the Government's announcement of fuel tax cuts.) 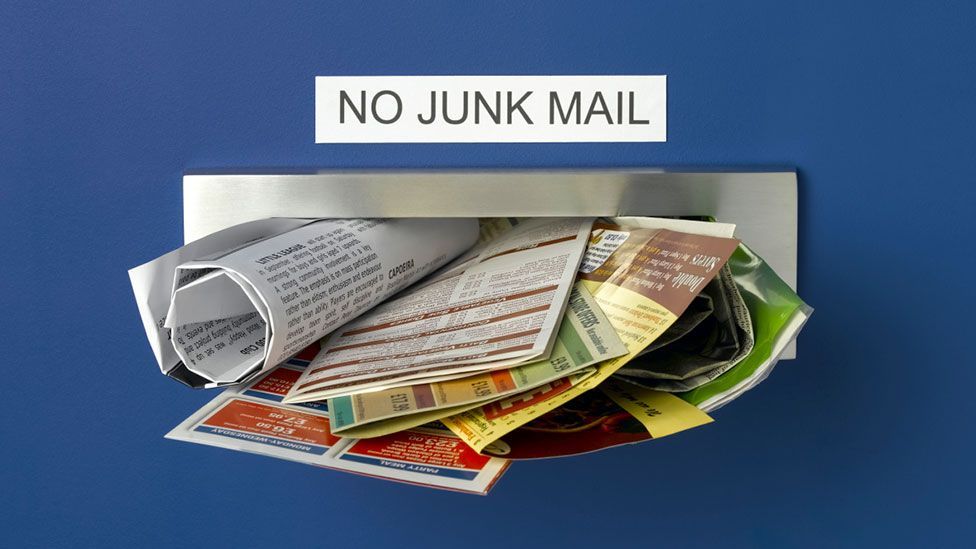 After investigating a tip-off, we have discovered that Sport NZ has spent $4.7 million conducting surveys in the last four years, interrogating New Zealanders on what kind of physical activity they do, how often, and for how long.

The spending figures were provided to the Taxpayers' Union under the Official Information Act:

This mammoth ongoing data-mining exercise proves that when you give an obscure agency generous taxpayer funding, they'll find a way to spend it.

Even if we accept that Sport NZ has to survey 20,000 people every year, the cost of $50 per participant is eyebrow-raising. At the Taxpayers' Union we manage to run surveys far more cheaply, even when we commission scientific market research companies like Curia.

Obsessively tracking New Zealanders' participation in yoga, gardening, and tramping may be a fun statistical exercise, but it hardly seems like a priority during a cost of living crisis. We're left wondering if Sport NZ is simply overfunded.

This newsletter is getting long...

Two last cases of wasteful spending before I sign off this Taxpayer Update:

Newshub reports that Kainga Ora has spent $24 million on renovating its own offices in the last four years. How can the housing agency claim to be in touch with low-income New Zealanders when it's spending like a mega-corporate??

The Herald reports that Michael Wood's tram to Māngere could cost $29 billion, according to Treasury officials – up from previous estimates of $14.6 billion and $24 billion. $29 billion is $15,000 for every Kiwi household, and well above a million dollars per metre of track.

Businessdesk  On The Money: Tesla co-founder down under, NZX, Victoria Harris, Ian Taylor

NZ Herald  MIQ 'irrational': Hundreds of entertainers, dozens of DJs granted exceptions to get into NZ

Stuff  Wellington's empty and sad - where are the ideas to revive it?

Democracy Project  Bryce Edwards: Political Roundup – Can Three Waters be salvaged, or will Nanaia Mahuta have to go?

Homepaddock  Good use of our money?

Stuff  As the Reserve Bank stokes interest rates, vodka may be the answer