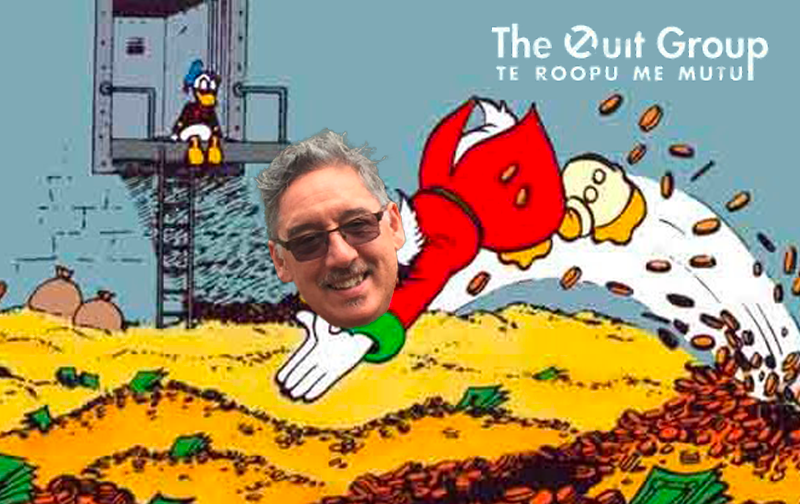 The Taxpayers' Union can reveal that The Quit Group – the charity originally commissioned to run Quitline – continue to hold $2.8 million in taxpayer funds, despite having lost their government contract in 2015.

The Quit Group promised to hand the funds over to anti-smoking initiatives. They have failed to keep their promise, and the Ministry of Health has failed to hold them to account.

In fact, since 2015 the Quit Group have been using the funds to collect investment income and pay board membership fees to themselves – $72,000 per year, or $18,000 per board member.

To make things worse, the Chair of the Quit Group is Chris Cunningham, who has recently been investigated by Charities Services for running up $128,000 in travel expenses as Chair of the Hepatitis Foundation.

In 2016 RNZ reported: The Ministry of Health called in lawyers for advice and has since reached an agreement with the Trust on using the money to support the government's goal to make New Zealand smoke-free by 2025. Ministry spokesperson Grant Pollard said that any Ministry funding remaining with the Quit Group Trust must be used for the purpose of supporting the 2025 Smokefree goal. He said the specifics of how the funds would be used have yet to be decided and is still being worked through. "The Ministry still has the option of auditing the Trust if an agreement can't be reached on how the funds will be utilised."

In 2017, the Ministry conducted this audit, but was hampered as the group claimed to have archived its records with no IT platform for retrieval. However, based on 'assumptions and estimates', the Ministry concluded that The Quit Group had received a funding surplus of $435,700 between 2007 to 2016.

Moreover, according to The Quit Group’s latest financial statements, it still has assets totalling $2,726,737, down from $3,164,394 in 2016. The Group has no staff, but continues to gain investment income from these assets and has paid out $702,296 in expenses since 2016. These expenses include $72,000 per year in fees for the four board members. The Group's four board members are Chris Cunningham, Janet Pearson, Mary McCulloch, and Annette Milligan.

An information response released to the Taxpayers' Union makes for disturbing reading. The Ministry concedes that it failed to stipulate any timeframe in which the group would have to use its funds. The Ministry does not plan to refer the group to the Charities Commission, and will instead "encourage the Trust to commit to spending the reserves. . .in a timely and appropriate matter."

This beggars belief. The Ministry has already let this group off the hook for four years. All this time, The Quit Group's board members have hoarded three million dollars, eating away at it by paying themselves board fees for doing stuff all. It's an insult to the ailing New Zealanders who desperately need anti-smoking support and other core health services.

The Minister of Health needs to step in to refer The Quit Group to Charities Services, so that the Government can repossess the funds on behalf of taxpayers.

Finally, the gravy train has to end for Chris Cunningham. He should by now be discredited from holding any of his taxpayer-funded positions. These include:

Just how badly can one man rip off taxpayers?