Auckland Council discriminates against vegetarians in $46,000 giveaway to meat eaters 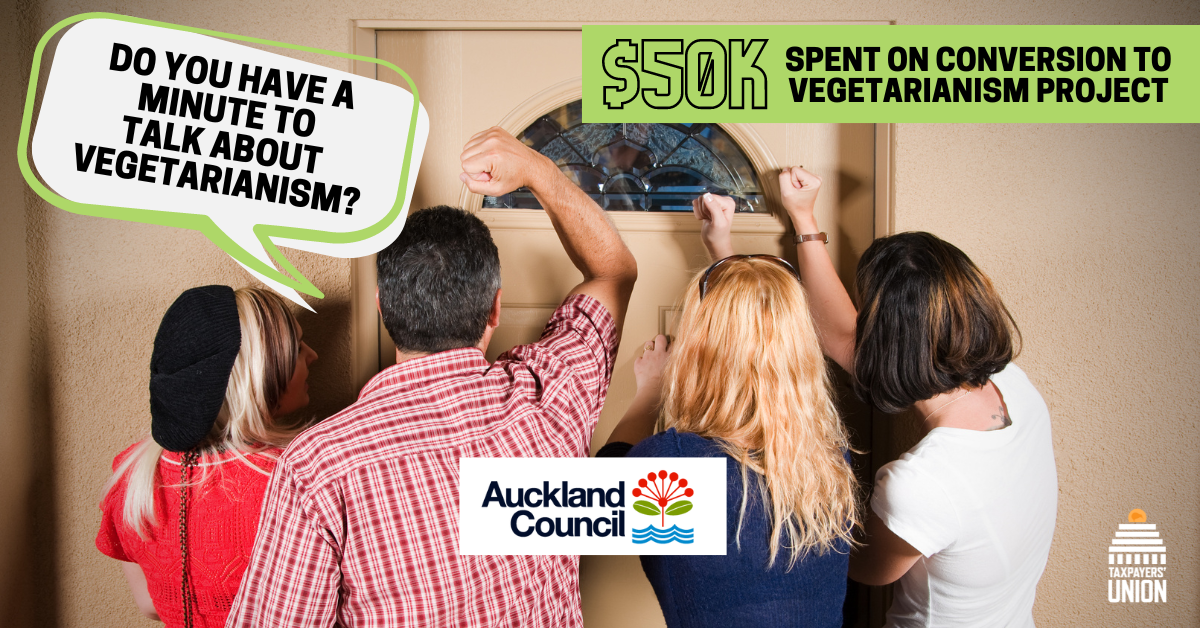 Auckland Council spends $46,227 on a giveaway coercing meat-eating households to convert to vegetarianism.

Around 2 months ago, one of our supporters notified us of an email they received where participants had the chance to obtain a free giveaway by completing a survey in relation to their food consumption.

The survey came from the ‘Different Dinners Trial’; an investigation into the eating habits of Auckland residents for the Council to ‘understand more about what types of interventions work best to support willing Aucklanders to make more food choices with a lower carbon impact.’ In other words, Auckland Council wants to know how to turn people vegetarian.

It should be mentioned this was no ordinary survey either. If anything, it was more of a recruitment procedure, directed on finding willing subjects that were open to trying a plant-based diet. Surveys were sent out to many Auckland residents, but only those who met specific criteria could finish the survey. The Council tells us they received 732 of these ‘completed surveys’ where participants all obtained at least one of the giveaway options. That’s a cost of $63 per response.

The list of criteria to complete the survey was the following:

Listed below are the costs of the survey, showing just shy of $50,000 was spent on providing the project. We can only applaud Auckland Council’s self-restraint on purchasing just 300 MyFoodBag vouchers.

It should be reiterated that only completed surveys (ones that met all the criteria) received a giveaway. This meant that vegetarians, light-meat eaters, those who live alone, plus confident vegetarian cooks were all effectively shunned from getting taxpayer funded free giveaways. It is almost comical that the meat-eating individuals this project actively frowns upon are the ones who were rewarded with free meals.

It is clear Auckland Council are shockingly indifferent towards this blatant discrimination. But regardless of this inequity, thousands of ratepayer dollars have been squandered on a council pet project that as I will explain, will not work and is completely unnecessary.

The main goal of this project is to achieve New Zealand’s emission goals through decreasing our meat consumption. As they put it, “This survey forms part of a broader programme of work looking at how Auckland Council can respond to its commitments to address climate change.” This specifically refers to NZ’s Nationally Determined Contribution (NDC), which aims to reduce emissions 50% by 2030 and to be net-zero by 2050.

Though, whether or not one agrees with these goals and how much prioritisation should be given to them, collectively having a more plant-based diet here won’t do anything to offset our emissions. If the Council does manage to convert a significant portion of Aucklanders to vegetarianism, which seems unlikely, they will hardly put a dent into NZ’s production of high carbon-emitting red meat. Being an export driven agricultural nation, NZ doesn’t rely on local consumption. 88% of beef and 95% of lamb is sold overseas, and this ratio will only increase if we reduce our meat consumption. When you take into account that demand for meat has generally risen worldwide, foreign consumers certainly won’t be hard to come by.

However, even if our diet did have a large effect on emissions, it’s hardly as if Kiwis' diets are in dire need of an intervention. In general, we have already started transitioning to a more plant-driven diet. We’re actually one of the only nations to have decreased our meat consumption since 2000. And with vegetarianism significantly on the rise, alongside a shift over to the consumption of leaner meats such as low-carbon emitting chicken and pork, it demonstrates that New Zealanders are already strongly line with this project’s intent.

Thus this might be one of the most unnecessary projects Auckland Council has managed in a long time. Not only will it explicitly discriminate against minorities (vegetarians), but the greater project of transforming our eating habits is needless intervention which won’t work to reduce New Zealand’s export-driven agricultural emissions. Overall, this vegetarian conversion project is undeniably the wrong approach to reaching our climate targets.

Agriculture makes up around 50% of our emissions, so it is crucial we look into how the industry can reduce its carbon footprint. Yet it is equally important to get everyone on the same page. Stunts like this will continue to divide people, and this will seriously affect the prosperity of New Zealand in future years. New Zealand farmers are already some of the most carbon-efficient in the world thanks to their ingenuity and adaptability. Their emissions per unit have decreased by around 1% for at least the last 20 years. They should be backed with a manageable framework where they can adapt and prosper, because the status-quo will only continue to push them out of the industry.

In closing, although this project doesn’t cost the Earth on its own, it does reveal Auckland Council’s persistent intent to waste taxpayers’ dollars on ideological projects that don’t achieve anything. Councils are in no position to lecture the public on their eating habits regardless of the cost, but spending tens of thousands of taxpayers’ dollars on what is clearly an attempt to pressurize meat eaters to align with their agenda is completely unacceptable and should be called out.

This story came as a tip from one of our supporters. If you think you have your own tip relating to government waste or extravagant spending, feel free to drop us a line here.