The Three Waters op-ed Stuff doesn't want you to read

The following op-ed was written by Taxpayers' Union Executive Director Jordan Williams in response to a piece published by Stuff and the Sunday-Star Times. Stuff refused to publish this, even when the Taxpayers' Union offered to pay for it as a half-page ad. 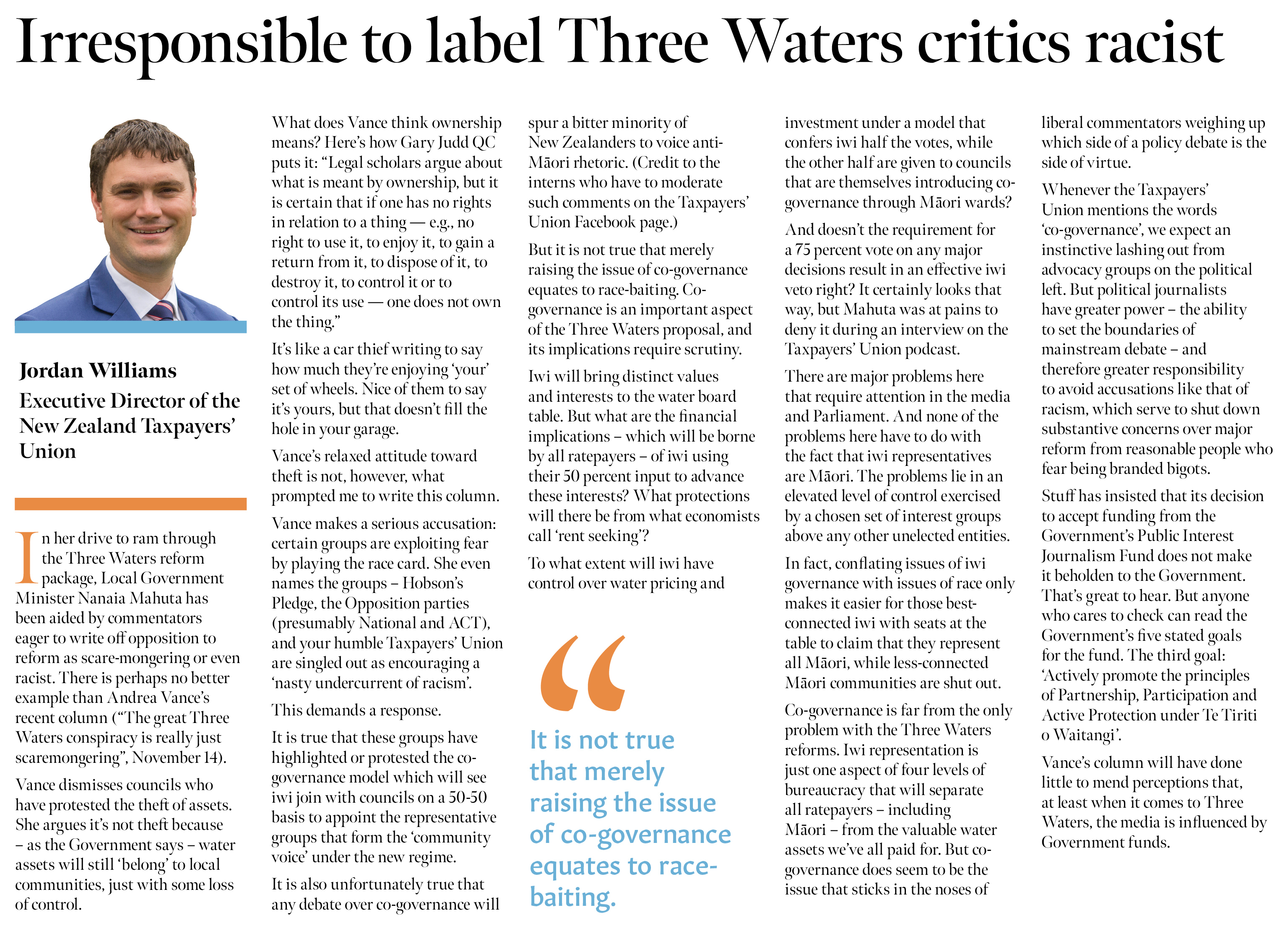 In her drive to ram through the Three Waters reform package, Local Government Minister Nanaia Mahuta has been aided by commentators eager to write off opposition to reform as scare-mongering or even racist. There is perhaps no better example than Andrea Vance’s recent column.

Vance dismisses councils who have protested the theft of assets. She argues it’s not theft because – as the Government says – water assets will still ‘belong’ to local communities, just with some loss of control.

What does Vance think ownership means? Here’s how Gary Judd QC puts it: “Legal scholars argue about what is meant by ownership, but it is certain that if one has no rights in relation to a thing — e.g., no right to use it, to enjoy it, to gain a return from it, to dispose of it, to destroy it, to control it or to control its use — one does not own the thing.”

It's like a car thief writing to say how much they’re enjoying ‘your’ set of wheels. Nice of them to say it’s yours, but that doesn’t fill the hole in your garage.

Vance’s relaxed attitude toward theft is not, however, what prompted me to write this column.

Vance makes a serious accusation: certain groups are exploiting fear by playing the race card. She even names the groups – Hobson’s Pledge, the Opposition parties (presumably National and ACT), and your humble Taxpayers’ Union are singled out as encouraging a ‘nasty undercurrent of racism’.

This demands a response.

It is true that these groups have highlighted or protested the co-governance model which will see iwi join with councils on a 50-50 basis to appoint the representative groups that form the ‘community voice’ under the new regime.

It is also unfortunately true that any debate over co-governance will spur a bitter minority of New Zealanders to voice anti-Māori rhetoric. (Credit to the interns who have to moderate such comments on the Taxpayers’ Union Facebook page.)

But it is not true that merely raising the issue of co-governance equates to race-baiting. Co-governance is an important aspect of the Three Waters proposal, and its implications require scrutiny.

Iwi will bring distinct values and interests to the water board table. What are the financial implications – which will be borne by all ratepayers – of iwi using their 50 percent input to advance these interests? What protections will there be from what economists call ‘rent seeking’?

To what extent will iwi have control over water pricing and investment under a model that confers iwi half the votes, while the other half are given to councils that are themselves introducing co-governance through Māori wards?

And doesn’t the requirement for a 75 percent vote on any major decisions result in an effective iwi veto right? It certainly looks that way to us, but Mahuta was at pains to deny it during an interview on the Taxpayers’ Union podcast.

There are major problems here that require attention in the media and Parliament. And none of the problems here have to do with the fact that iwi representatives are Māori. The problems lie in an elevated level of control exercised by a chosen set of interest groups above any other unelected entities.

In fact, conflating issues of iwi governance with issues of race only makes it easier for those best-connected iwi that are given seats at the table to claim that they represent all Māori, while less-connected Māori communities are shut out.

Co-governance is far from the only problem with the Three Waters reforms. Iwi representation is just one aspect of four levels of bureaucracy that will separate all ratepayers – including Māori – from the valuable water assets we’ve all paid for. But co-governance does seem to be the issue that sticks in the noses of liberal commentators weighing up which side of a policy debate is the side of virtue.

Whenever the Taxpayers’ Union mentions the words ‘co-governance’, we expect an instinctive lashing out from advocacy groups on the political left. But political journalists have greater power – the ability to set the boundaries of mainstream debate – and therefore greater responsibility to avoid accusations like that of racism, which serve to shut down substantive concerns over major reform from reasonable people who fear being branded bigots.

Stuff has insisted that its decision to accept funding from the Government’s Public Interest Journalism Fund does not make it beholden to the Government. That’s great to hear. But anyone who cares to check can read the Government’s five stated goals for the fund. The third goal: ‘Actively promote the principles of Partnership, Participation and Active Protection under Te Tiriti o Waitangi’.

Vance’s column will have done little to mend perceptions that, at least when it comes to Three Waters, the media is influenced by Government funds.