A note on National's new leadership 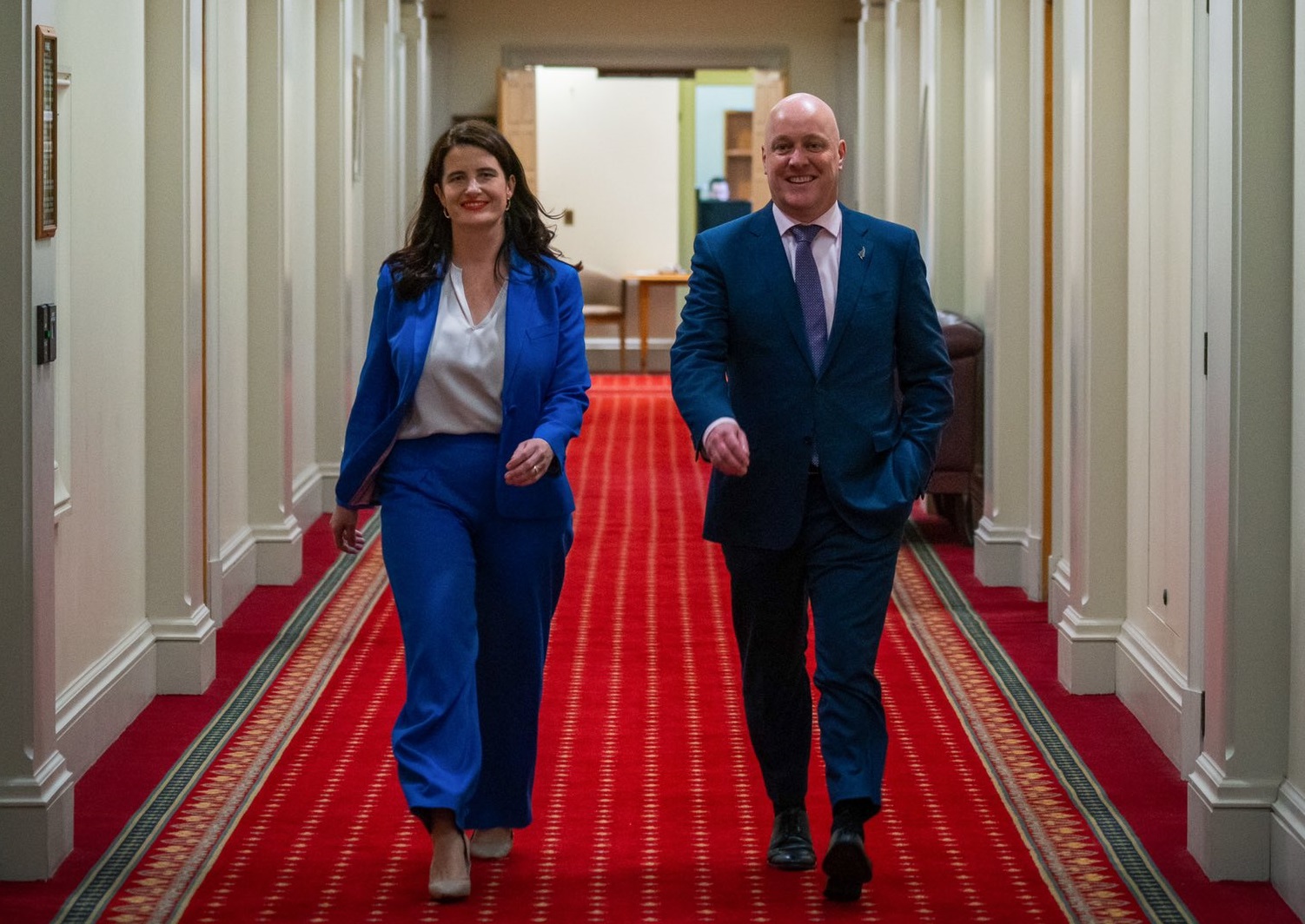 You will have seen the news that Chris Luxon has been selected as the National Party's new Leader, with Nicola Willis as Deputy.

Here's the reaction from our Executive Director Jordan Williams:

It is to Chris Luxon’s credit that he is one of the few MPs to have taken a pay cut – in his case of over $4,000,000 a year – to enter Parliament, having left the top position at Air NZ. He is a person who is clearly motivated by public service rather than raiding the taxpayer’s wallet.

He is one of the few MPs who has paid more tax in this life than he has taken out of the system, unlike most Labour MPs and sadly many National MPs.

We are urging Chris Luxon to confirm he will maintain major commitments to taxpayers made by previous National Party leaders – such as indexing income tax brackets for inflation, reining in Superannuation costs, opposing new asset taxes, and repealing Three Waters legislation should it pass under this Government.

Jordan and I interviewed Chris Luxon in two recent episodes of the Taxpayer Talk podcast – on Three Waters and on congestion charging. 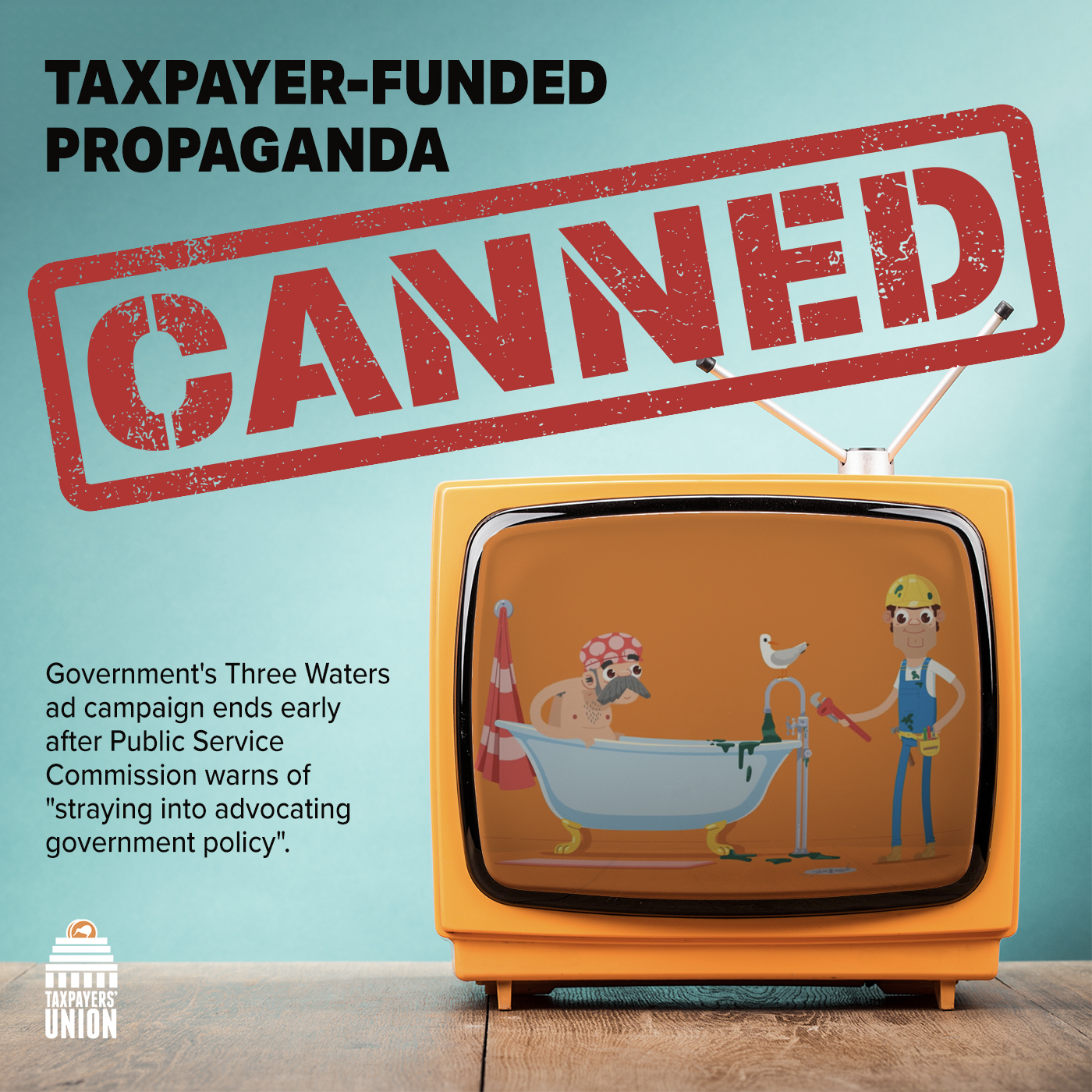 You've probably seen the Government's Three Waters ads. The childish, condescending cartoons have been played to death on TV and cost taxpayers $3.5 million.

What you might not know is that the Government isn't allowed to use taxpayer funds to persuade the public to support a Government policy.

BusinessDesk has revealed that the ads have now been canned early due to concerns from the Public Service Commission that the campaign was ‘straying into advocating government policy rather than explaining policy’.

This is good news and ought to be a major embarrassment for the Government. But it still feels like too little, too late. The ads were allowed to run for months, during a highly sensitive council engagement process. And the Government’s Three Waters propaganda site, backed by taxpayer-funded Google ads, is still online.

BusinessDesk has also reported that officials at the Department of Internal Affairs have withheld the release of details of the campaign’s marketing and communications proposal, after taking 50 working days to respond to an information request.

This raises obvious questions. Is the marketing proposal being kept secret because it reveals in plain language that the campaign was always intended to influence political opinion?

The Ombudsman is currently investigating the Department of Internal Affairs's failure to explain how these ads were signed off. Watch this space. 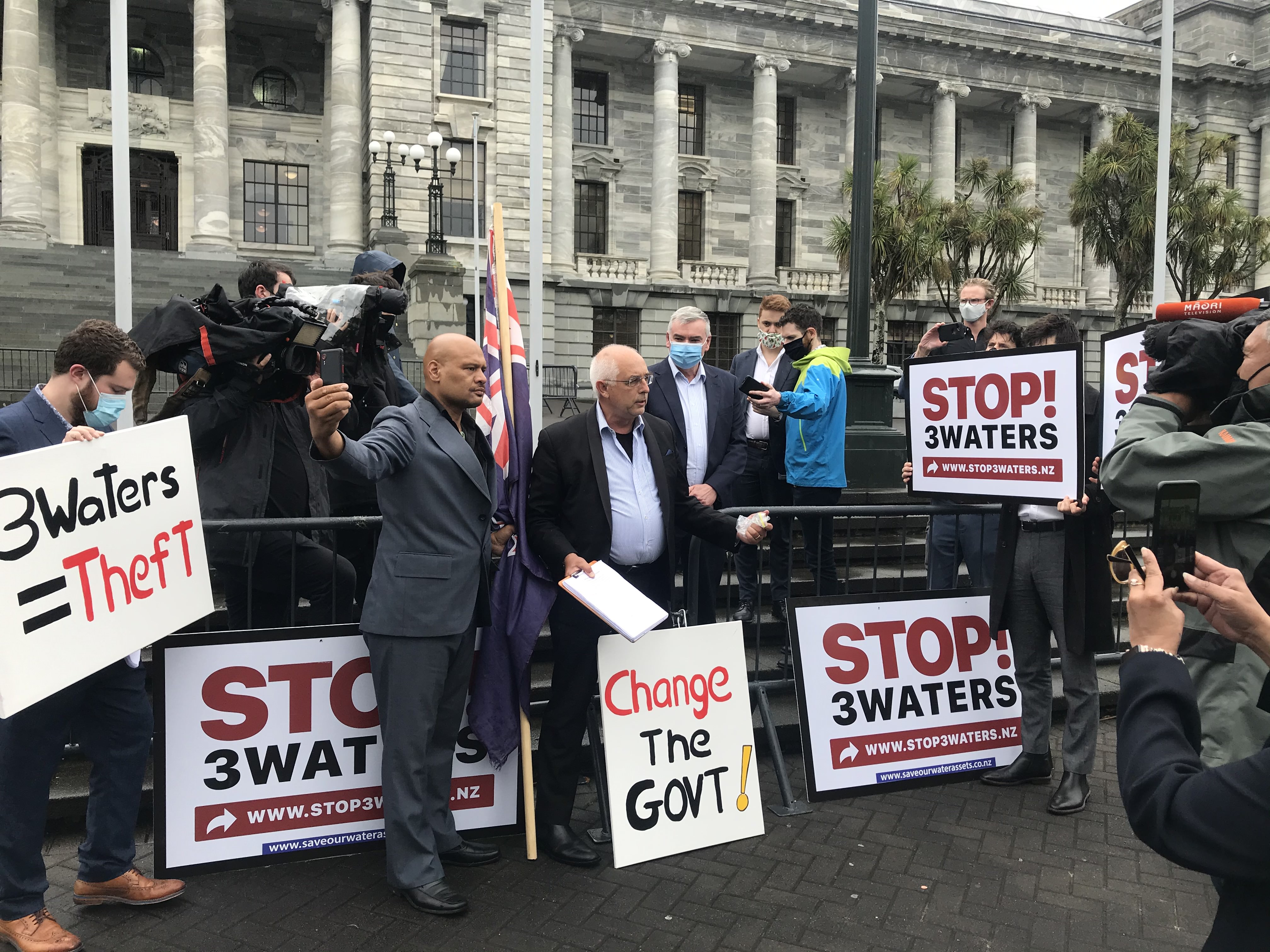 How good is this! Yesterday we joined a group of Thames-Coromandel ratepayers who travelled to Wellington to hand over signatures from local residents and ratepayers calling for proper local consultation on Three Waters.

Cheers to Scott Simpson, MP for Coromandel, who accepted the petition and attracted a scrum of media desperate for his comments on the National Party's leadership contest.

Our nationwide petition is still active at www.ThreeWatersPetition.nz. Once Nanaia Mahuta formally unveils the legislation (possibly next week), we'll be making a renewed push to get the petition to 100,000+ signatures. 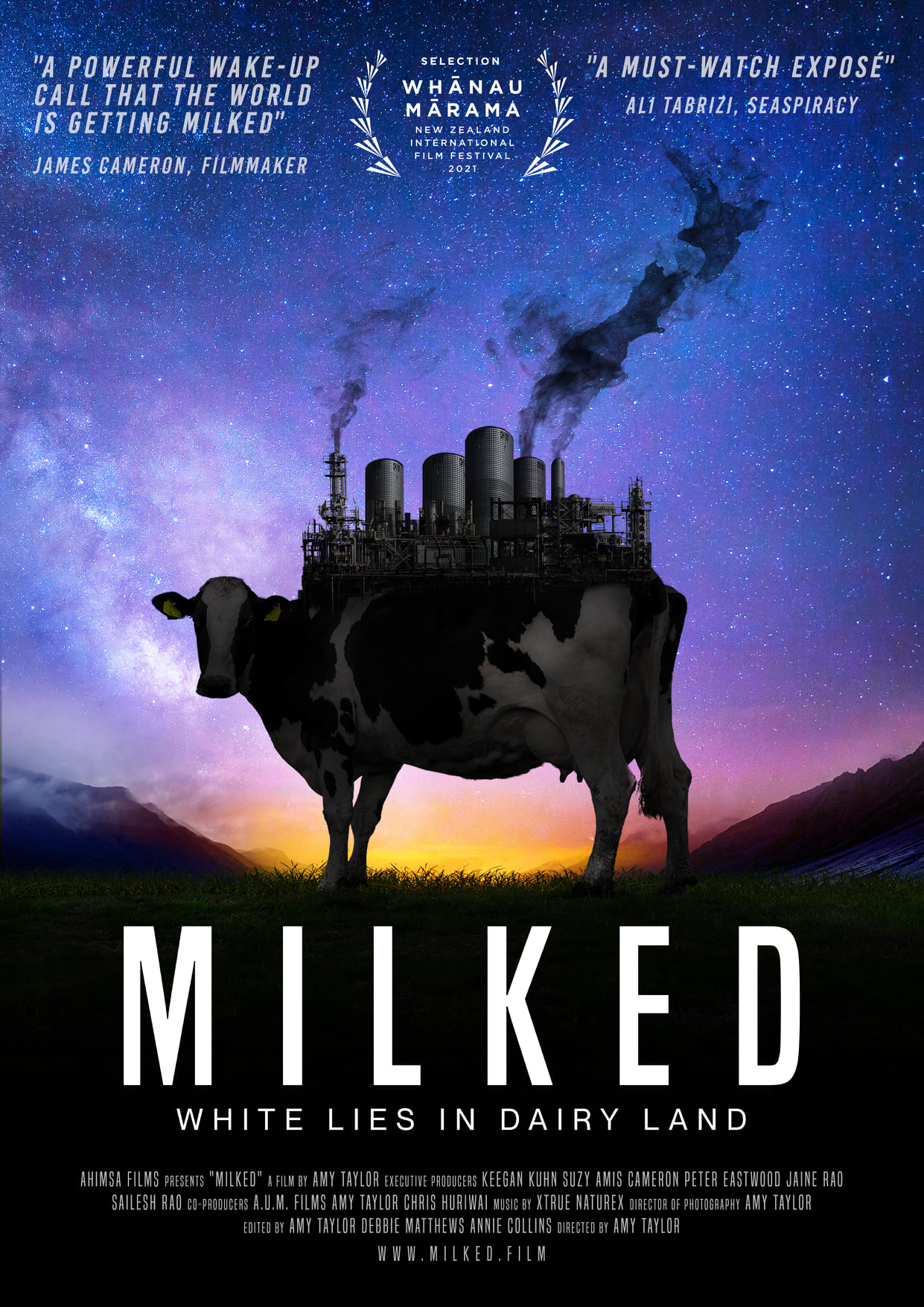 You may have seen the marketing for a new anti-dairy documentary, "Milked".

We've discovered the film is taxpayer-funded: it received a $48,550 "finishing grant" from the Film Commission.

The film argues that the dairy industry causes climate change, pollutes water, destroys land, abuses cows, and victimises dairy farmers. It's explicitly political, with constant shots of the Beehive in the trailer, and features contributions from Greenpeace, SAFE, and the Green Party. And it appears to be part of a wider anti-dairy campaign – the promoters have erected billboards attacking the dairy sector. 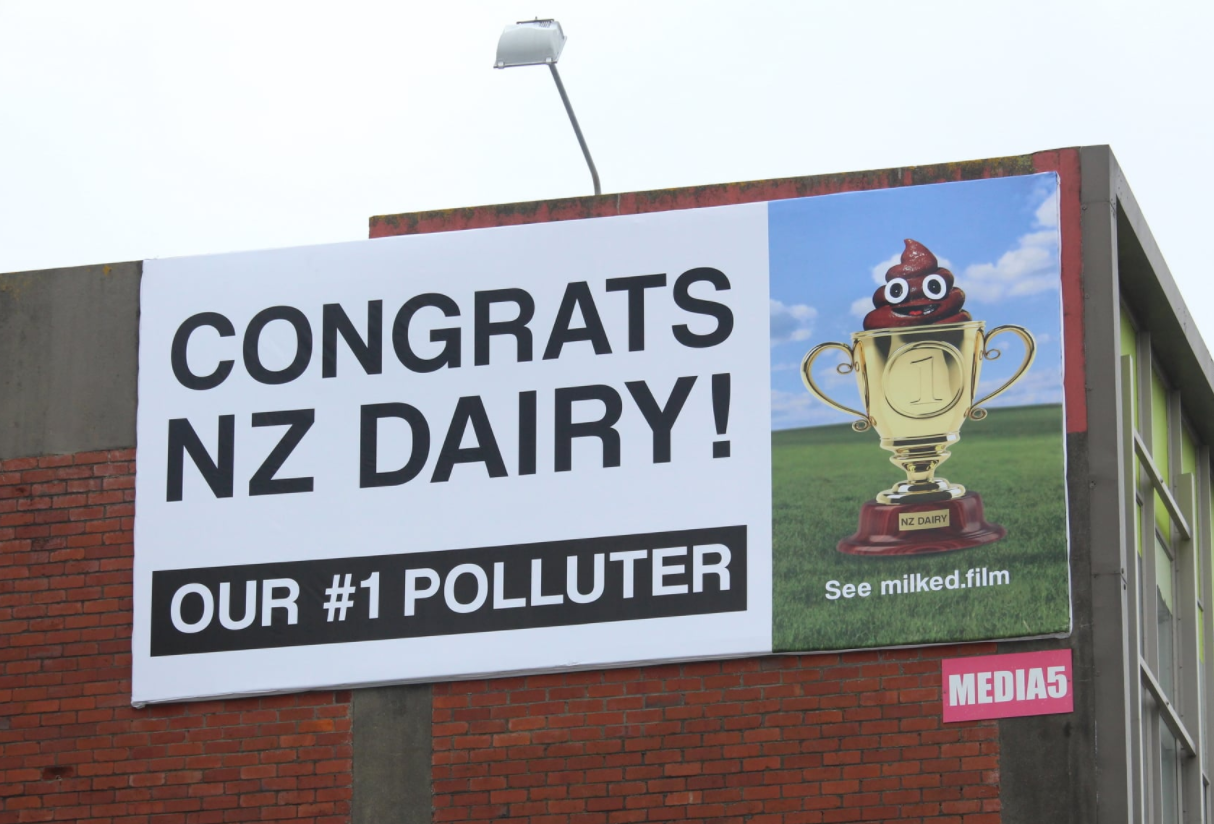 As we've said with the Government's Three Waters ads, taxpayers should never be forced to fund political propaganda. We accept that sometimes it can be difficult to define what makes a documentary "political", but Milked is a clear-cut case of activism intended to shift public opinion on a major issue of policy and economics.

Click here to read more – including the Film Commission's pathetic response to our questions. 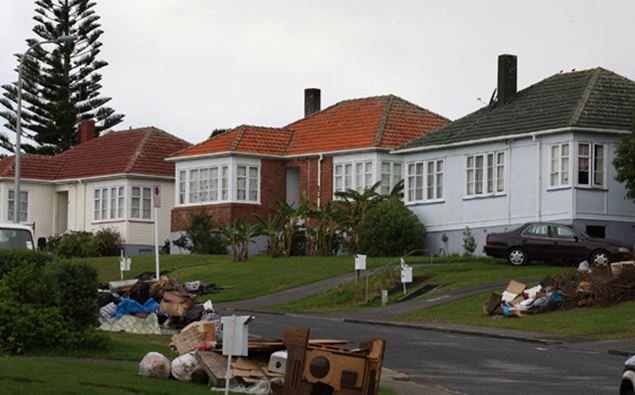 The past week has seen an avalanche of reports of Kāinga Ora tenants terrorising their neighbours. Kāinga Ora is the Government's social housing agency.

Despite the abuse suffered by neighbours, Kāinga Ora has not evicted a single tenant since 2018. This is part of the Government's official policy of "sustaining tenancies".

Here's just one experience from someone living next door to a Kāinga Ora property, as told to the NZ Herald:

In a terrifying 2019 incident, the man says his house was "smashed up" at 3am by a meth-crazed man linked to the Kāinga Ora property who tried to break into their home.

The homeowner chased the intruder down the road with an umbrella to protect his petrified partner and later discovered a discarded knife.

The couple then spent thousands of dollars building a fortress-like 2.5m metal perimeter fence and installing security cameras for their protection. The fence has since been repeatedly vandalised by the tenants - who have Mongrel Mob links - costing thousands of dollars in repairs.

The man suspects the Kāinga Ora property is operating as a "tinny house". He has witnessed savage beatings on the road, and has footage of the neighbours abusing him, firing an airgun at his home, hurling large river stones on to his roof and smashing a car windscreen with a brick.

This lowlife behaviour completely disrespects the efforts of taxpayers who make social housing possible. We're even forking out thousands for compensation payments to victimised neighbours.

The Government's refusal to evict problem tenants sends the message that social housing comes with a free pass to act like animals.

State housing should be set up to handle difficult tenants, but that doesn’t mean we should throw all standards out the window. Thousands of more deserving New Zealanders are currently living in cars or garages and would gratefully take the place of violent tenants. 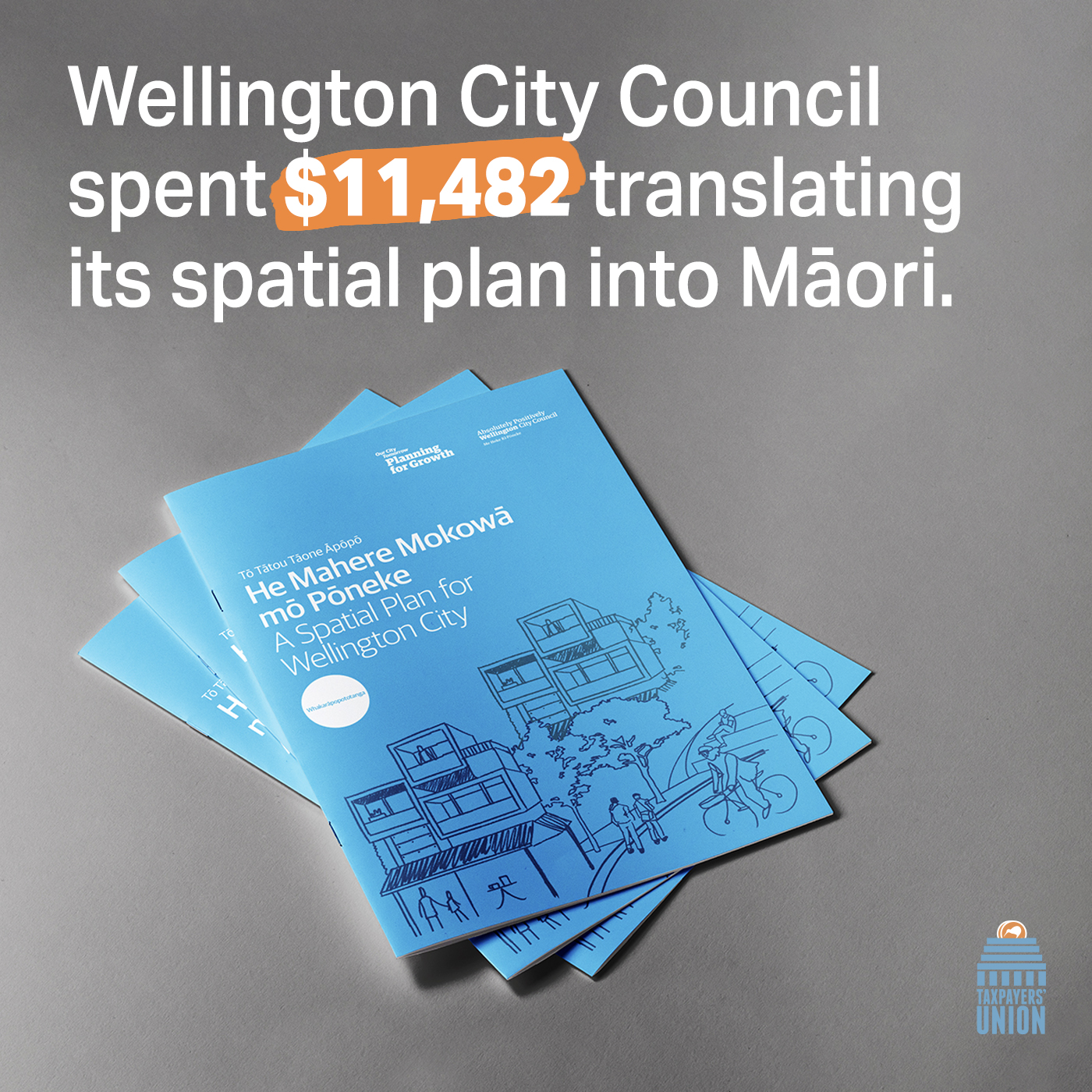 This is a council that cries poverty at every opportunity and just hiked rates by 13.5%. It’s a terrible look that they still can’t resist tokenistic gestures like translating reports into Māori versions that no-one will ever read.

If you enjoy these email updates but want to see more in-depth analysis, I recommend our podcast, Taxpayer Talk. Below is a selection of recent episodes.

NZ Herald  Thomas Coughlan: What is Labour without Covid?

NZ Herald  Bill Ralston: The pandemic has distracted us from politics

The Press  Is Ardern abdicating the leadership?

NZ Herald  This week critical for Ardern after her rating slumps

Stuff  New Covid-19 bill is a case of government overreach

Stuff  Before or after Christmas? The question Nation MPs are starting to ask about Judith Collins' leadership

RNZ  Week in Politics: Will 1 December be Auckland's 'Freedom Day'?

Kiwiblog  Labour down in two polls

Newstalk ZB  The Huddle: School's back, Ardern visit and AstraZeneca