Last week we headed to a petrol station in Takapuna with a mission: expose high fuel taxes by refunding motorists the tax on their bill. In Auckland, tax now accounts for 52% of the price at the pump.

To prevent a stampede, we announced the location publicly just an hour beforehand of the half hour event.

Word got around and a queue quickly formed down the street, with Newshub, 1News, and even Radio NZ turning up to see what the fuss was about. 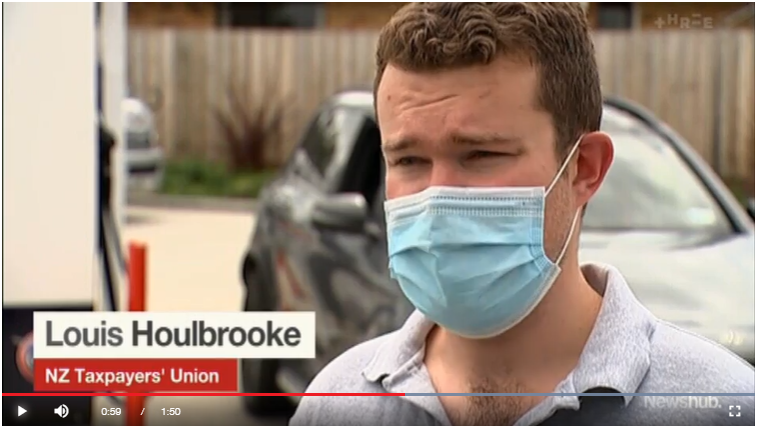 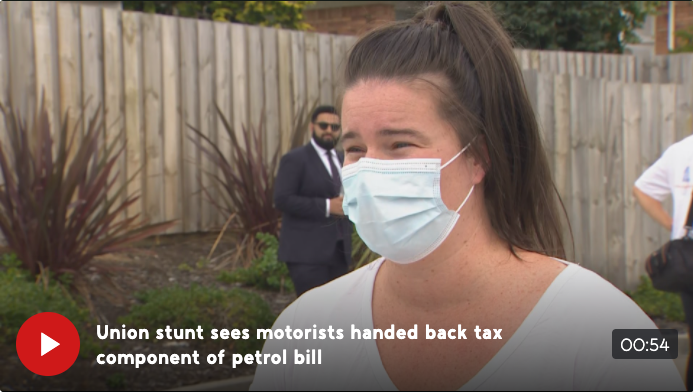 The Taxpayers' Union wouldn't usually give handouts, but in this case it was a small price to pay to get fuel taxes into the six o'clock news.

Half what you pay at the pump is tax 💸

As I pointed out to Chris Lynch on Magic Talk this morning, looming war in Ukraine is likely to lead to disruption and sanctions that will drive fuel prices even higher.

Jacinda Ardern might not be able to control Vladimir Putin, but she can shield taxpayers from the cost of conflict by pulling back the petrol tax lever.

The petition now has more than 11,000 signatures.

Please don't do this 🙈

Someone bought this sticker from the Taxpayers' Union store and put it on a petrol pump: 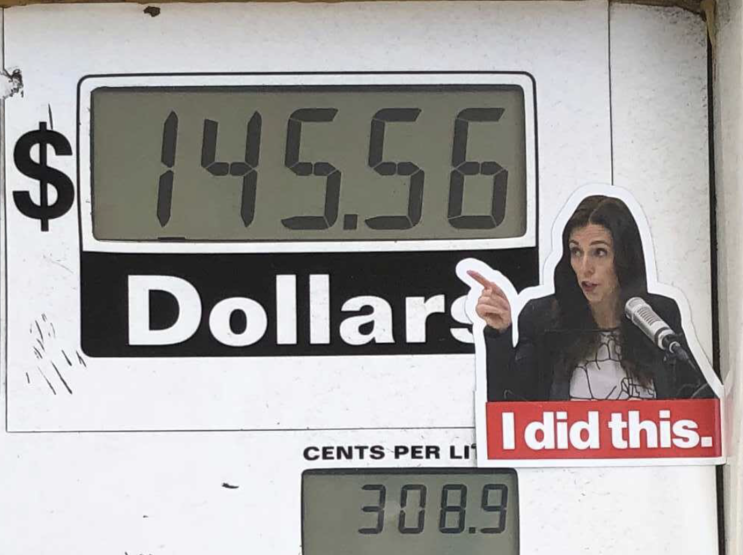 Putting stickers on petrol pumps is naughty behaviour that we cannot possibly endorse.

If Taxpayers' Union supporters started pasting hundreds of these stickers on fuel pumps up and down the country we would be so upset that we would ask you to send us photos so we can expose this bad behaviour on social media. 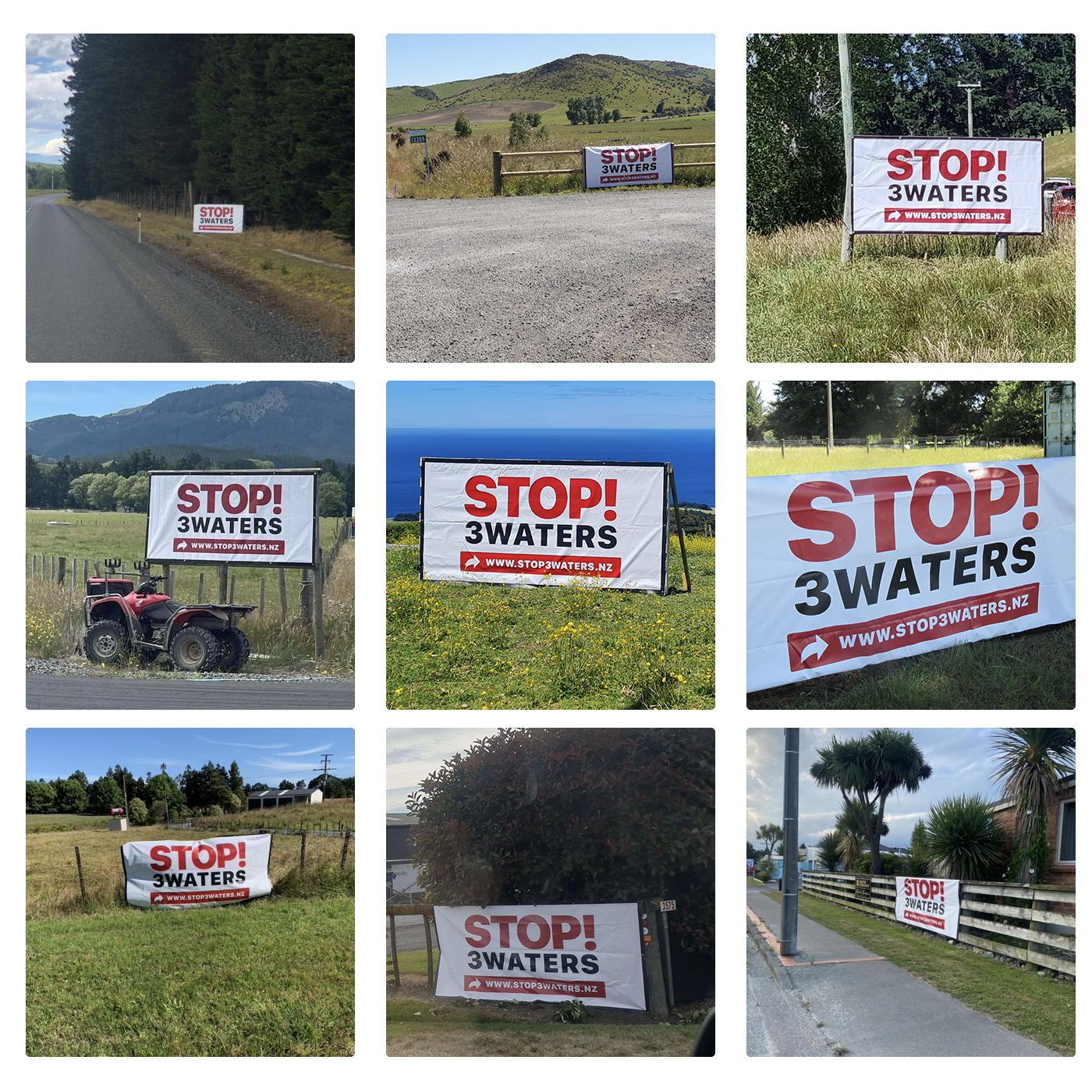 Late last year it was widely reported that the Government had delayed its Three Waters legislation until at least March, after facing overwhelming public opposition.

A new update from the Department of Internal Affairs confirms that the delay is even longer: the Government will now introduce the legislation "mid-year".

This is fantastic news for the campaign to Stop Three Waters. Firstly, it shows just how spooked the Government is by our efforts. They're on the back foot and are working desperately to massage the reforms into something more palatable to New Zealanders.

Secondly, the delay means that the legislation is likely to face public consultation in the same period as local body elections. We'll be working with council candidates to expose the nasty details of Nanaia Mahuta's asset grab in town halls and on election billboards across the country.

We can win this!

We know another why the Government has had to delay Three Waters. It relates to a court challenge that was filed last year but that we'll be announcing tomorrow... Keep an eye on your email.

On Thursday, we hosted an event for Taxpayers' Union supporters to meet National Party Leader Christopher Luxon, questioning him on any topic, free from the prying eyes of the media.

The BBQ was exclusive to Auckland-based members and financial supporters of the Taxpayers' Union. With COVID rules limited attendance to 100, but in future we hope to host much larger face-to-face events. If you're not already a member, join the Taxpayers' Union to get onto the invite list.

(Thank you to everyone who came along and gave such positive and helpful feedback to me, Jordan, Sara, Levi, Annabel, and the team. It was great to meet so many of you and put faces to names!)

You know things have got bad for the Government when...

It's not often that we're on the same page as the Public Service Association – the main public sector union which tends to campaign for the Labour Party. 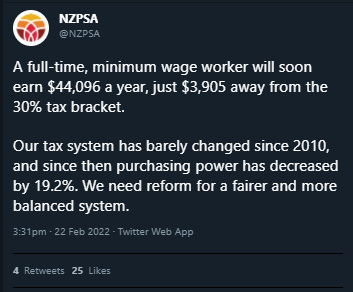 Tax bracket creep has now got so bad that even this left-wing union is now running our talking points: that minimum wage workers are now at risk of falling into the 30 percent income tax bracket.

There is a growing consensus that it's time to address bracket creep, but Grant Robertson says he has no plans to change the brackets. The obvious reason is tax creep has benefited him by stealthily increasing his income tax take, allowing him to make massive spending commitments of dubious quality. We need to keep the pressure on. 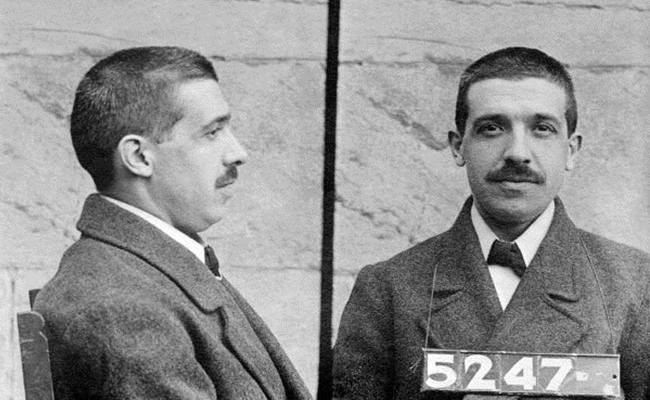 The Reserve Bank is currently putting together legislation that would see deposits with banks insured by taxpayers.

However, the scheme would extend to high-risk finance companies. Where similar schemes have been put in place overseas, they have resulted in taxpayers being forced to bail out dodgy failed investments and even collapsed Ponzi schemes.

Our Research Fellow Jim Rose (a long-time economist) has produced a submission on the proposed Deposit Takers Act. You can find the executive summary and full document here.

Taxpayer Talk: What does the new TOP Leader stand for? 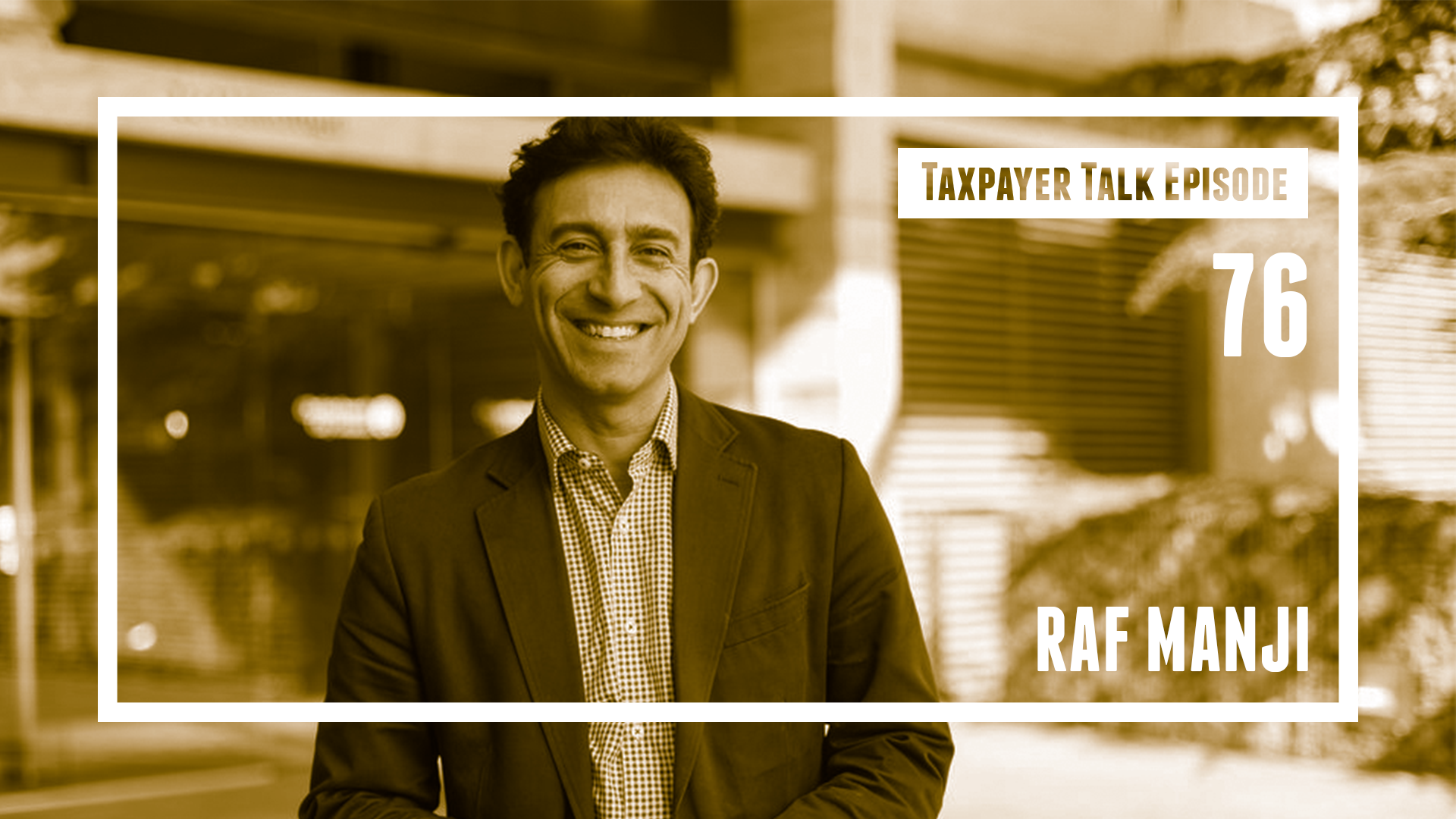 The Opportunities Party (or simply "TOP") has a new Leader – Raf Manji. I sat down with Raf for a long-form podcast interview to ask why he's so keen for a universal basic income, how he thinks a land tax will pay for it, and whether TOP is a "left-wing" or "right-wing" party.

Click here to listen, or find all of our Taxpayer Talk episodes on Apple Podcasts, Spotify, Google Podcasts, or iHeart Radio.

Thanks for your support, and all the best,

Stuff  Decision made on TVNZ, RNZ merger by the Cabinet, sources suggest

Stuff  Parliament protest: The podium of truth has shifted and may never return

RNZ  The Week in Politics: The protesters and the politicians

The Daily Blog  New Poll: Support for Luxon hardens – Left plus vs Right plus plus plus in 2023 showdown

Stuff  New poll: National surge up closer to Labour; Greens and ACT down