The following is our update to supporters who have lodged their objection to the Government's Three Waters - either through the official Stop Three Waters petition, or submission tool:

Subject: Tackling the culture of dishonesty in Wellington re three waters

Thank you again for supporting the fight against Nanaia Mahuta’s Three Waters proposals. Further to Peter Williams’ (no relation!) note last week, I’m emailing to ask for your feedback on a matter we have been thinking about for some time. This email is longer than usual, but we think you'll agree it needs to be for what we're considering.

First though, in case you missed it, our formal submission to the Select Committee on the Three Waters "Water Entities Bill" is here. This emaiL concerns the legal opinion appended to that submission – you may have heard our lawyer interviewed this morning on "Today FM", and the media release summarising the opinion is copied at the end of this email.

Since David Farrar and I co-founded the Taxpayers’ Union in 2013, we have noticed growing public sector tolerance of dishonesty. There has always been some expectation of manipulation and ‘spin’ in the media. But we could expect Ministerial advisers and contracted professionals to maintain their own standards. At the least, they would stay silent when Ministers were being “political”. Now it seems agencies and public servants feel compelled to collude in lying.

In the context of the Three Waters campaign, we’ve seen an unprofessional approach in the way people who ought to know better perpetrated and repeated some Minister’s claims about Three Waters. We have long been worried that they’ve seemed untrue (or at the very least, calculated to be misleading). Take two examples:

Why is there more tolerance for dishonesty and unprofessional conduct in our public bodies?

Public service professional standards of honesty and integrity have traditionally relied on the State Services Commissioner (now the "Public Service Commissioner") to maintain. We fear, however, that the Public Services Commission has deteriorated just as much as the public sector agencies it is set up to monitor. We have not seen it effectively disciplining agencies which have been dishonest or used public money for political advertising campaigns (NZTA, for example).

So in that context I asked lawyers Brigitte Morten and Stephen Franks for an opinion on Minister Mahuta’s false claims about Three Waters reforms.

We wanted a strict legal opinion on whether minister Mahuta was in breach of the Fair Trading Act and securities legislation regarding the claims she was making about councils owning “shares” in the Three Waters assets – i.e. would she be a crook if this was the context of a share offer to the public?

The lawyers don't pull punches: Ministers have hoodwinked the public on 'ownership' claims

The opinion we got back, which has also been peer reviewed by a Queen's Counsel, is probably the most damning legal opinion I have ever read. It concludes that Minister Mahuta's claims regarding ownership have been "calculated to deceive Parliamentarians, and when it becomes law, to deceive New Zealanders generally". 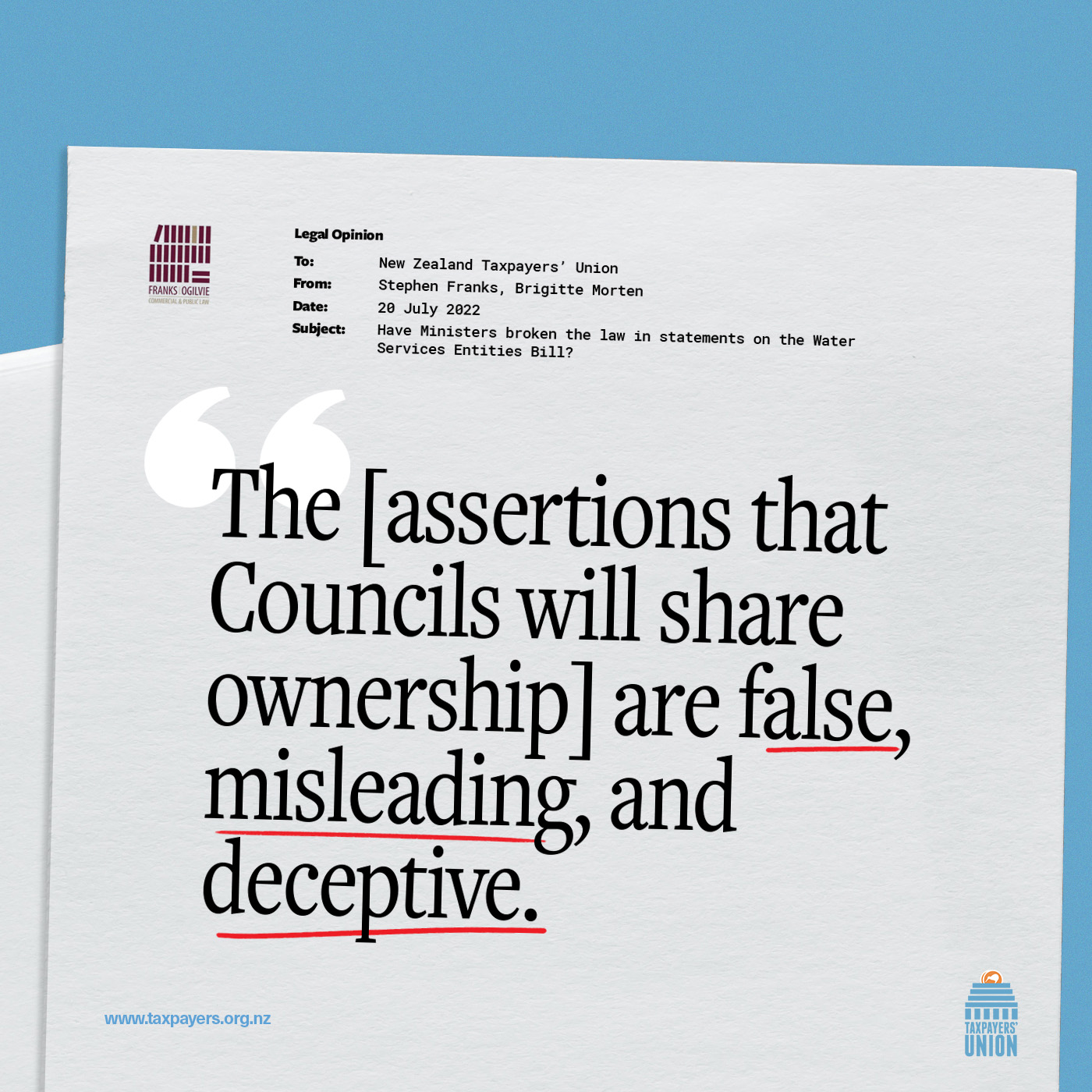 The legal opinion is very detailed, but it is not hard to understand. It calls the claims of retention of local ownership "false, misleading and deceptive" as "councils are expressly denied the rights of possession, control, derivation of benefits, and disposition that are the defining attributes of ownership". Gary Judd QC comments in his review of the legal opinion: "When all the lying statements are put together, as [the] opinion does, the government’s effrontery is breath-taking."

While the opinion says the Minister can’t be prosecuted for criminal wrongdoing because her comments were not made "in trade" it hadn’t occurred to us that those party to Ministers’ false assurance could potentially be liable and held to account.

Most notably they raise the possibility that culpability could reach any professional advisors on the Ministers "Governance Working Group" on three waters governance, and the council's lobby group (that sold out to the Government), Local Government New Zealand.

In my experience, lawyers usually hedge their bets and understate wrongdoing. But that isn’t the case here. The lawyers think there is a clear breach of not only the usual standards of honesty and fair dealing, but of the law. Have a read of the opinion and judge for yourself.

So where to from here?

So we want you feedback. We’ve taken the first step and informed the Commerce Commission (our lawyer's letter is here).

If the Commerce Commission don’t act promptly, should we seek advice on the steps on a private prosecution? That would be a big trigger to pull – it would likely send shockwaves through Wellington (in the best possible way). But how else can we STOP the dishonesty, force the Government (or at least those working for it) to acknowledge that Three Waters is an asset grab – that council’s won’t “own” the assets in any meaningful way?

Most importantly how do we re-establish expectation that public servants’ statements are truthful in the old-fashioned sense – that they will not allow themselves to be misused to deceive, by omission or commission?

For the politicians, the task of keeping them honest rests at the ballot box – but our democracy relies on a professional public service that is truthful and enjoys the confidence of all New Zealanders as straight shooters. That can mean 'free and frank' advice to Ministers, and telling them things they don't want to hear. We cannot let it stand that the bureaucracy are playing politics and joining hands in political and legal deceptions on the public.

So have a read of the opinion, let us know your thoughts, and I will ensure each and every reply is read as we work out where to from here.

PS. For those of you who have marked the date - the Water Users Group is finally in Court tomorrow! They are there to argue that the official advice provided to and relied upon by Minister Mahuta (the advice that she claims says that Three Waters is necessary for the Crown to comply with the Treaty) should be made available for public security. To my immense frustration the High Court has prohibited those who are funding the cause from sitting in on or listening to the hearing. I am hoping to sit down with one of the two QCs who are arguing that case tomorrow or Friday, and will update all of those who have chipped into that cause just as soon as I have news to give you. You can read the memo from the Court on the reason we cannot watch here, and the latest update from the Water Users' Group here.

Like tens of thousands of New Zealanders, the Taxpayers’ Union submitted to the Finance and Expenditure Select Committee on Three Waters (Water Services Entities Bill). With the Union’s submission was a bombshell legal opinion.

Ministers have repeated assurances that councils will continue to own water assets under the proposed ‘Three Waters’. But those claims are utterly false. Public law firm Franks Ogilvie, in an opinion reviewed by Gary Judd QC, lay out the extent to which these claims have been "calculated to deceive Parliamentarians, and when it becomes law, to deceive New Zealanders generally". The opinion is being released publicly today.

Taxpayers’ Union Executive Director Jordan Williams says, “It is clear the Government realised that they could not convince New Zealanders that handing over ownership of local assets was a good idea. So they’ve instead redefined 'ownership' to mean nothing, so they can promise continued community ‘ownership’ in an incredible display of contempt for the public, the truth and the law.”

The legal opinion is very detailed, but it is not hard to understand. It calls the claims of retention of local ownership “false, misleading and deceptive” as “councils are expressly denied the rights of possession, control, derivation of benefits, and disposition that are the defining attributes of ownership”. Gary Judd QC comments in his review of the legal opinion: “When all the lying statements are put together, as [the] opinion does, the government’s effrontery is breath-taking.”

The legal opinion concludes that despite the obvious dishonesties, ministers are immune to prosecution under the Financial Markets Conduct Act 2013 and the Fair Trading Act 1986 as they are not ‘in trade’.

Mr Williams continues, “But that defence does not apply to people assisting the Ministers in a professional capacity. That would include, for example, members of the Working Group on Three Waters governance that could be held liable as they operated ‘in trade’ as professionals providing a service and could be deemed complicit in making the untrue claims.”

“Additionally, legal experts found that Local Government New Zealand ‘could be found to be acting in trade in its provision of representation and advisory services', so their public statements promoting the lie that councils will ‘own’ water assets under Three Waters, could make them also liable to prosecution.”

The authors of the legal opinion do not mince words in their assessment of the situation stating: “Ministers appear to have cold-bloodedly decided to confuse Councils and ratepayers with false statements.”

Mr Williams says, “Ministers might dodge prosecution because they’re in politics, not ‘trade’, but the lawyers note the expectations in the Cabinet Manual and Standing Orders. They must not mislead the House and they must act to ‘the highest ethical standards'. However, the consequences for our elected members will not come from the courts, but at the ballot box.”

“It is difficult to see how the Government can proceed with such a discredited abuse of legislative process. The huge public opposition to the Bill came without knowing of such damning conclusions from respected legal experts. This is not a careless, technical, or understandable mistake in legislation. It is intentionally deceptive. The lies have been actively promoted by ministers, Working Group members, LGNZ, and various elected and non-elected officials."

“We’ll be seeing if anything effective can be done to restore customary honesty among those drawn into this ministerial cheating. If officials were forced to be complicit, they may need better support against ministerial pressure. We’ll be considering carefully whether authorities who punish and deter calculated dishonesty by business people, can do their job when the cheating comes from the top."