Museum of omnishambles in Hawke's Bay 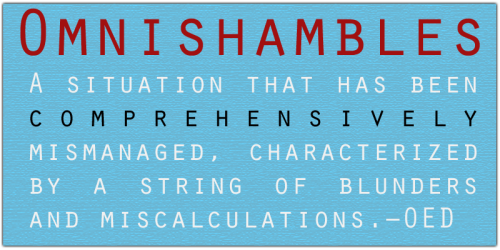 It appears that Hawke’s Bay mayors may have known of the omnishambles at the new museum in Napier a year ago and apparently have failed to do much about it.

The museum and gallery opened last September and cost Hawke's Bay ratepayers $18 million to build.  To recap, last month we learned that the budgets were wrong:

Napier City Council has been caught short after discovering that thousands of people it thought were visiting its museum were just popping in to use the toilets.

Now it needs to revise its 10-year plan after finding that the projected visitor numbers for its new $18 million museum and gallery were based on inaccurate figures.

Then we found out that the museum cannot hold the collection it was built to accommodate. In fact, it is so small up to 40% will need to stored at an as yet unknown site. Radio NZ, The Dominion Post and TVNZ covered the story.

Then began the spin from Napier City Council that they knew of the problems all along, but were nevertheless conducting a 'review' on how it happened.

This morning the Dominion Post reported that Hastings Mayor Lawrence Yule was aware of the situation, an allegation made by Napier's Mayor but strongly refuted by Mr Yule. The whole saga appears to be resulting in a somewhat undignified spat between the mayors of the Bay cities.

I venture to suggest that there is more to come of this story...