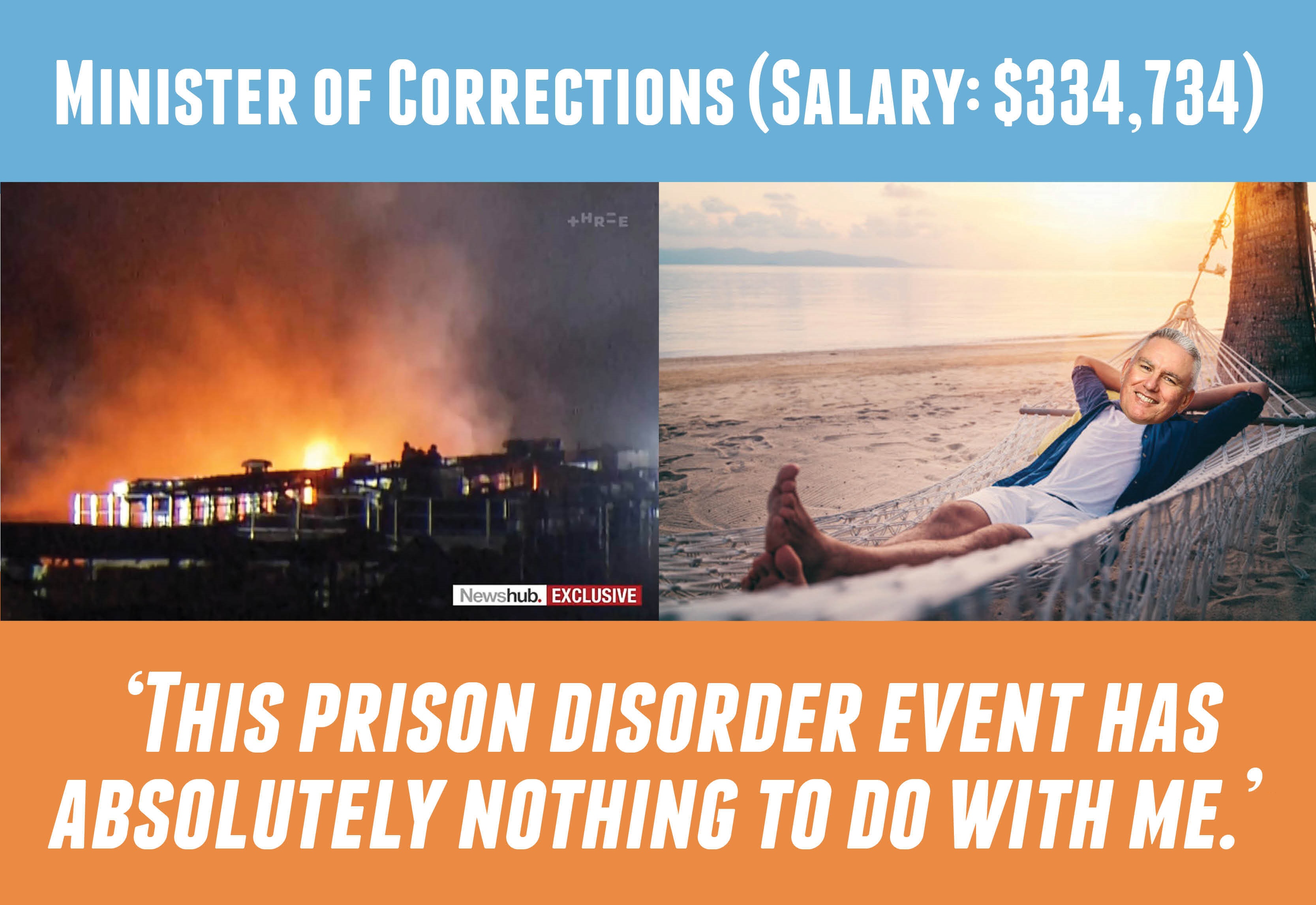 2020 was one heck of a year – excuse my strong language – and I definitely need this six-to-eight-week taxpayer funded holiday to recharge my batteries.

Happily out fly fishing, which is clearly listed as one of my key strengths on my Ministerial CV, before being interrupted by a call from a random press secretary about some prison riot. I inform her that I am the Deputy Leader of the Labour Party, and would be Deputy Prime Minister of New Zealand if hadn't given that up totally voluntarily, and this is clearly a matter for the mere Minister of Corrections.

She rather tersely informs me that I am the mere Minister of Corrections, that she is my press secretary, and she has been so for three years. Well, that was awkward. I think the tension scared all the fish away. So, might as well do one of my patented strategy sessions when dealing with a crisis.

First, some research. It turns out Waikeria Prison is a real prison and there is a riot going on right now. For me, there were three tell-tale clues of riotness – prisoners are supposed to be in the cells, guards should be in charge and the only ones with weapons, and the top half of the prison should definitely not be on fire.

I build myself a desk fort, to keep to the haters out, while I think. The Ministerial cushions I have ‘borrowed’ from my Ministerial residence are excellent for this task. Part of the COVID-19 tourism recovery fund was used to embroider my name, face, and signature, on every piece of my office furniture. I will sleep well tonight.

The next day at the lodge, after a leisurely brunch of paua fritters, cantaloupe salad, and pineapple Raro, I pull out my best Winnie the Pooh notebook and a fresh pack of coloured pencils. This is going to be my best plan ever, though admittedly H1 and H2 had drafted a pretty comprehensive crisis response template for me after several ‘communication issues’ in the first term.

Grant Robertson comes down to my office, carried on a sedan chair by four aides, with a fifth sprinkling rose petals in his path. This is rarely a good sign.

He proclaims that my portfolio might have to pay for rebuilding the prison that got burnt down. That seems unfair. I had absolutely nothing to do with it. The disorder was about housing standards so, like every second policy in this Government, it is Megan Woods’s responsibility. She should have to pay.

Defending myself, I argue to Grant that if Waikeria Prison had been properly upgraded then there would not have been these issues of standards. Grant agrees, but then ruins the moment by pointing out that one of my first and only moves as Minister of Corrections was to cancel National’s planned upgrade of Waikeria. This is a setback.

Oh well, at least I am still Labour Deputy Leader and Minister of Corrections. It seems literally nothing can change that.