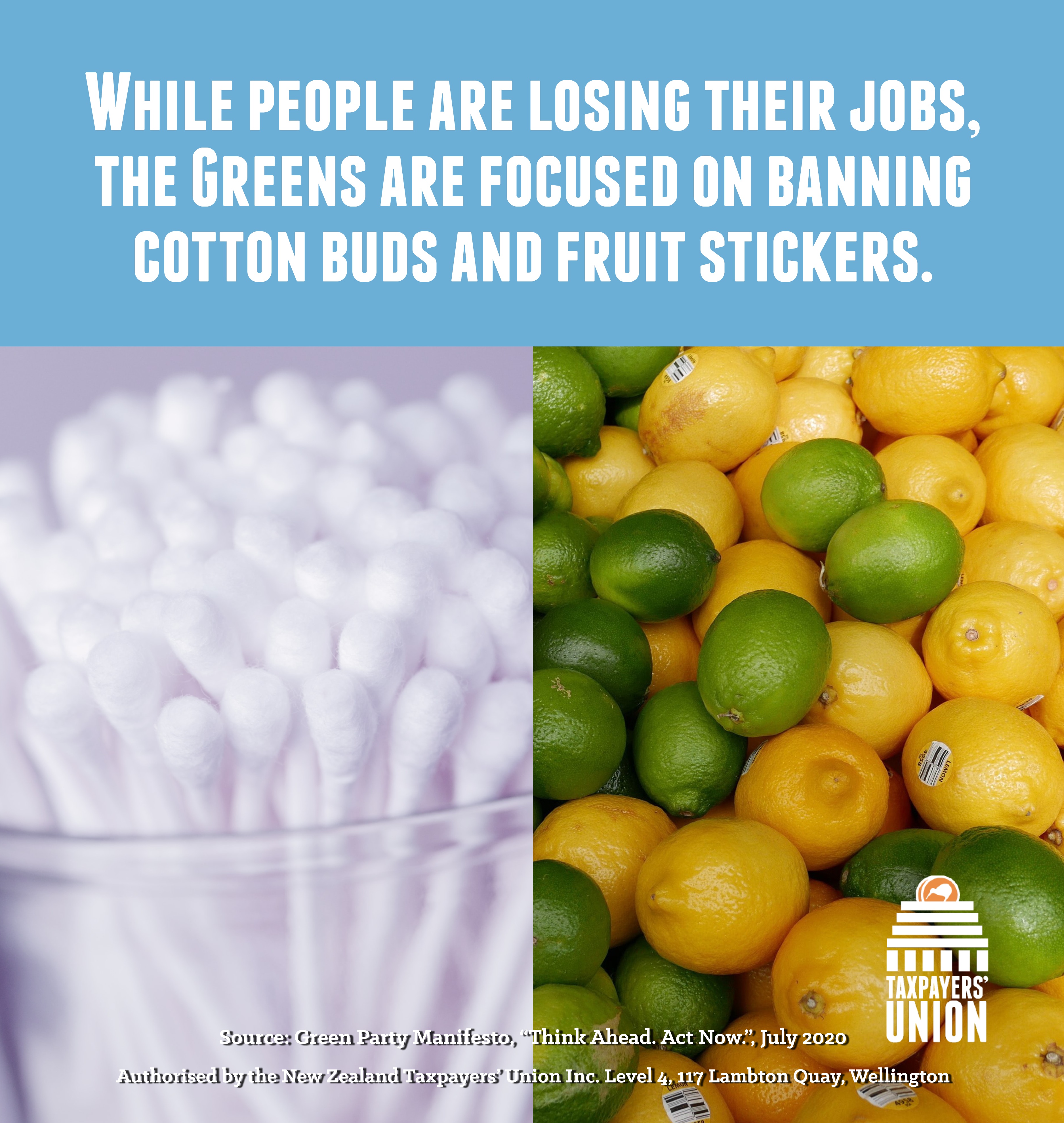 The Green Party of Aotearoa (they do not use the term New Zealand) has launched a 52-page manifesto. We at the New Zealand Taxpayers’ Union read the modestly titled “Think Ahead. Act Now. Our Green vision for Aotearoa” so you do not have to.

Crunching the numbers did not take long. There are literally no costings – none. However, reading through page after page after page of expensive policies confirm that any number would be very large indeed.

Here are the key terrifying points for taxpayers in the Green Party Manifesto for the 2020 general election.

[My comments in brackets.]

[More bureaucracy and another Commissioner job for ex-Green MPs. Is this really a priority in a COVID-19 environment with soaring debt? This is literally the third policy listed in their document.]

• Uphold the kaitiaki, proprietary, and customary rights of iwi and hapū over water.

[This would dramatically expand the rights of iwi and hapū over all water.]

• Create a fairer system for water allocation by introducing fees for commercial users like bottling plants. Iwi and hapū would be involved in designing the framework.

[Why would iwi and hapū have input into a commercial framework?]

• Increase funding support for iwi and hapū, landholders, and community organisations to restore the health of forests and waterways.

• $1.3 billion to create thousands of jobs for nature over the next four years, including 6,000 jobs in conservation.

[The NZTU has never seen a robust definition of what a job for nature is. Does it count jobs that would have already been created?]

• The Green Party is not in the pocket of big fishing companies.

[While people are losing their jobs, the Greens are focused on banning cotton buds and fruit stickers.]

• Review the New Zealand-Aotearoa Tourism Strategy in light of COVID-19.

[A five-agency review of the Tourism Strategy in light of COVID-19 was already announced last week. Just a shame we will not be getting any tourists any time soon.]

• Develop a Kids in Nature programme where schools get operational funding to enable students to learn in outdoor classrooms, build their outdoor recreation skills, and go kayaking, bush walking, and snorkelling.

• Roll out Te Reo Māori as a core school subject through to Year 10.

[Can students snorkel and learn Te Reo Māori at the same time for double NCEA credits?]

• Embed ecological sustainability and civics education in the curriculum.

• Fund arts, culture, and creativity in schools, including supporting the Creatives in Schools programme.

[Is there going to be any time left in school for maths?]

[Probably talking about that miscreant Jordan Williams at that terrible Taxpayers’ Union.]

• Uphold human rights by lowering the voting age to 16 and extending voting rights to all people in prison.

[All people in prison. Clayton Weatherston’s vote will be worth the same as yours!]

[This would effectively make it impossible for future Parliaments to remove Māori seats as Labour and the Greens will always support them.]

[The main barrier is that most people do not want Maori wards.]

[Presumably a reference to Greenpeace or Forest and Bird, noted lobbyists with Parliamentary passes.]

[Have they checked whether there are companies or charities ready and willing to step up to fill the massive funding gap this would create?]

• Require health warning labels on all legal drugs, including alcohol.

• Guarantee equal gender representation in Government appointments, while addressing other gaps including ethnicity and disability.

[Quotas! Where are we going to find all those male nurses?]

• Ensure Aotearoa’s defence forces promote peace, justice, and environmental protection (such as fisheries enforcement) throughout the Pacific and the world.

[Some pretty serious geo-political consequences in that short sentence.]

• Work with global partners to support the forgiveness of unjust Global South debt, and fair debt relief measures, especially in the aftermath of the COVID-19 crisis.

[A trillion-dollar sentence right there.]

• Incorporate matauranga Māori into the health system, and fund provision of primary healthcare through Māori organisations, overseen by a new Māori health agency.

[No more beers after the match for you, peasants!]

• Facilitate finance for development of papakāinga [housing] on Māori land.

[We’re halfway through with no reference to tax. The only references to economic growth are negative.]

• Review the use of algorithms and risk profiling in immigration decisions.

[We suspect most people would support risk profiling.]

• Reform sentencing, bail and parole laws to enable the gradual replacement of most prisons with community-based rehabilitation.

• Oppose the use of the Public Works Act to acquire Māori land.

• [Page 31] Introduce a new tax of 1 per cent on an individual’s net wealth above $1 million and 2 per cent on net wealth over $2 million. This tax would only affect the wealthiest 6 per cent of New Zealanders.

• Make donations to non-profit art and creative organisations tax-deductible, like charities are.

• Ensure funding of arts and culture organisations does not solely rely on gambling revenue, and work with venues to secure revenue that doesn’t rely solely on alcohol consumption.

[Again, who is going to step up to fill up this funding gap? Probably the taxpayer.]

• Embed creativity in future Wellbeing Budgets and the Treasury’s Living Standards Framework, so it influences policy-making right across government.

[Hopefully we can pay off our huge national debt with creativity. What’s the exchange rate on that?]

• Establish a Public Interest Journalism Fund, making grants available for projects and journalists, with criteria to ensure diversity of voice in media is considered as part of the grants process.

[Formalise Government funding for selected journalists. Yet somehow the influence of lobbyists is the bigger problem.]

[Basically, try to force government agencies and businesses to use New Zealand advertising even though Facebook or Google are more effective and cheaper. This goes even further than the media companies’ desperate pleas to the Epidemic Response Committee.]

• Increase RNZ’s funding, including RNZ Concert, which could then employ journalists losing jobs in the private media sector.

[“Funding” = taxpayer money for what is considered by New Zealanders to be the most left-leaning media outlet.]

[This would breach multiple trade agreements.]

[NZ Made even if there are cheaper and better alternatives from overseas.]

[Second reference to Maori data sovereignty in the document.]

• Design people-friendly streets that are safer for walking and cycling, particularly around schools.

• Move to default union membership so people automatically join a union when they start a new job, but can opt out.

[Will this include the Taxpayers’ Union?]

• Restore the right to solidarity strikes and political strikes.

[The 70s called – they want their strikes back!]

[Another burden on employers.]

• Improve redundancy processes and provide a minimum of one-month full pay for people made redundant.

• Extend the living wage beyond the core public sector, including to contractors.

[Costly implications for many government agencies and businesses.]

• Develop specific employment and equity standards to be used when selecting contracts for government procurement.

[Again, no focus on value for money, just virtue signalling.]