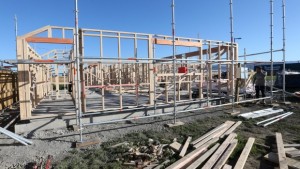 New Zealand's soaring house prices are a symptom of a deeper problem, and one man has had the wisdom and courage to hit the nail on the head. That man is Labour MP Phil Twyford of Te Atatu, but his sound strategy has taken a backseat to knee-jerk grandstanding within his party.

In May of this year, Twyford called for the abolishment of Auckland's urban growth boundary, to free up land for construction. The boundary, he wrote, "creates an artificial scarcity of land, and drives up section costs.… [making it] up to 10 times more valuable than rural land."

The party's housing spokesman also identified "restrictive land use rules" as contributing to the misery of "Generation Rent." He correctly attacked the National Party for doing nothing in this regard, and advocated not only freeing up growth on the fringes but "allowing more density" and "intensive spatial planning" within city limits.

Beyond barriers to construction, Twyford saw faulty incentives at the local level, and promoted an innovative alternative to flip the incentives and make new developments pay their own way. That would be a form of bond financing for the necessary infrastructure, over an extended period of up to 50 years.

Such was the need for and common sense of this plan that the New Zealand Taxpayers' Union started a petition drive to show support — and it is nearing the goal of 2,500 signatures. Even former National Party leader Don Brash in effect endorsed this idea, when recently he said that Auckland's would need to fall by 40 per cent, with the lack of available land being the root problem.

Yes, the gravity of the situation is there for all to see. Out of 87 major metropolitan housing markets in the Anglosphere, Auckland is the fourth most expensive, nipping at the heels of Sydney and Vancouver, which have crises of their own. In fact, an assessment from Demographia, a US consulting firm, has found housing in six of New Zealand's eight largest cities to be "severely unaffordable." That means a median price more than five times the median household income, and Auckland's ratio of 10 makes it double even that threshold.

Sweeping all earlier logic aside, Mr Little promised more bureaucracy not less, including an "affordable housing authority" with a $100 million budget. His "KiwiBuild" plan for government housing includes another $2 billion of spending, a train wreck for boondoggles and taxpayer waste.

Even worse, Little wants to outright confiscate land from rightful owners and trash respect for private property, a precious legal and moral principle. Why? So he can rezone it and hand it over to large developers — in the name of the little guy, of course.

How about just skip the expropriations and let the land be rezoned? That win-win approach, in line with Twyford's earlier push, would boost asset values for the owners and spawn new developments naturally.

Even if it did not garner headlines, Labour had a near ideal plan that zeroed in on the real problem of impeded supply. Bipartisan support also made it a winning campaign issue, backed by research from the New Zealand Initiative, New Zealand’s top policy institute. Yet Labour have given in to the short term politics and opted for a booming, grandiose plan that is more dangerous and destabilizing than anything else.

A real KiwiBuild plan would put confidence in Kiwis to build their own homes. They could do that just fine, if those in office would get out of the way.

Fergus Hodgson (@FergHodgson), originally from Ngaruawahia, is an economic consultant with the Fraser Institute in Canada, and he advises the New Zealand Taxpayers' Union. He holds degrees in economics and political science from Boston University and the University of Waikato.