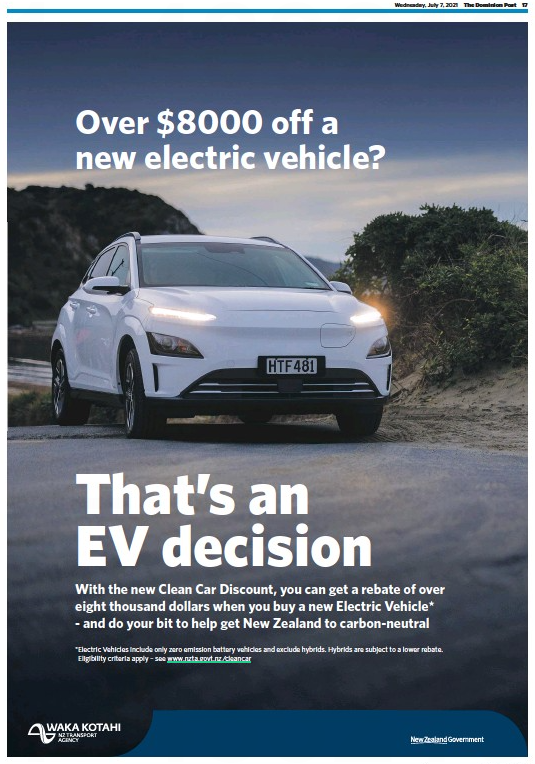 An official information response shows the advertising campaign was developed by Clemenger BBDO and ran for most of July including print, radio, posters, flyers, Google ads, and "content partnerships".

What a pointless exercise in self-promotion. The amount of media attention this feebate scheme has received since it was announced has surpassed anything NZTA might hope to achieve through paid advertising.

Regardless, retailers of low-emissions vehicles already have an incentive to promote the discount themselves. If the widely-publicised discount is failing to attract people to electric vehicles, that suggests a problem with the policy itself.

The most egregious part of this campaign is the $34,000 allocated for 'content partnerships' with Stuff and NZME. In other words, NZTA is buying positive media coverage. This raises serious questions about the independence of the media. How can a media outlet effectively scrutinise a policy when at the same time they're paid to promote it?

The ads weren't just wasteful but misleading, saying that the scheme would help you 'do your bit to help get New Zealand to carbon neutral'. Anyone with a basic understanding of climate policy knows that in New Zealand carbon emissions are capped and traded, so choosing an EV over a petrol vehicle just frees up emissions to be produced elsewhere under the cap.