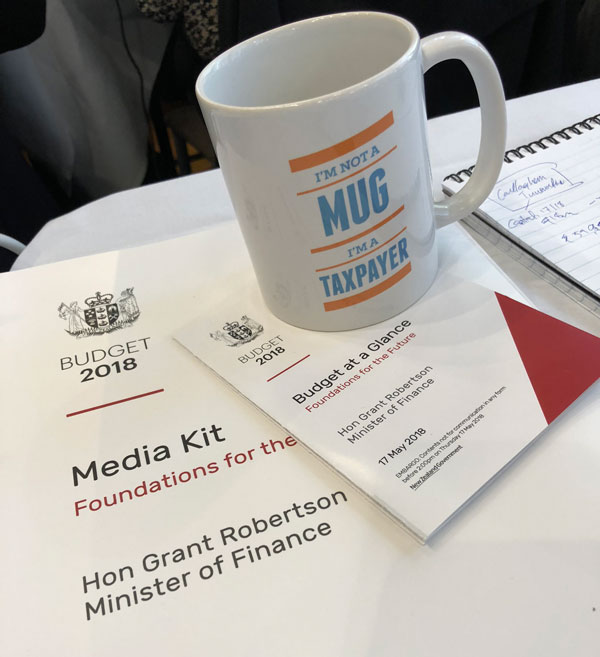 Our analysts have just left the Government’s Budget lock-up having pored through the largest budget media/analysts pack we can recall and listened to an early version of Finance Minister Grant Robertson’s speech which he has just read to Parliament.

You can read our summary comments to media here.

Except for the appropriations, Budget documents are essentially political. The key announcements the Government is hanging its hat on, are listed at the bottom of this email.

Robertson’s first budget was written in extraordinarily benign circumstances. The economy is growing at a sustainable rate of around 3%, tax revenues for the June 2018 year will exceed Budget 2017 estimates, unemployment is down to 4.5%, employment levels are very high at 73.1%, and public debt at 21.7% of GDP is low and trending downwards.

The economy is in vastly better shape than any new Government has inherited since 1972. That year Labour leader Norman Kirk won with a thumping majority and an inexperienced team. Labour lost to National’s Rob Muldoon, with a similar majority in 1975, and no more clues as to how to manage structural problems with the economy, which led to the economic crisis of 1984 and the Lange/Douglas reforms.

Prime Ministers Bolger, Clark and Key would have been over the moon if they could have assumed office with today's economic fundamentals.

It is very encouraging that the Government is remaining within the pre-election ‘Budgetary Responsibility Rules’.  We think Steven Joyce's allegations that Labour had an $11.7 billion hole (which Labour vehemently denied) had also been helpful in keeping the Government restrained in the face of criticism from some on the left who say they should borrow more.

Budget 2018 announced that “public consultation will be launched in August on establishing an independent body to better inform public debate in our democracy.”   This is something the Taxpayers’ Union has been pushing for since 2014 – for transparency and accountability of what political party policies will cost taxpayers.

For decades political parties during election campaigns have made allegations about expenditure policies of others.  That’s why we worked so hard last year with our election “Bribe-O-Meter”.

In terms of tax relief, unless you breed horses you are out of luck. Winston Peters has announced $4.8 million in tax reductions for ‘high quality’ horses (defined in the media release as being based on bloodlines, looks, and racing potential!).

The Greens’ major budget announcement was a “Green Investment Fund” to “transition to a net-zero-emissions economy by 2050.”  The budget sets aside $100m for this corporate welfare capital funding.

This was inevitable after eight successive Budgets that have not delivered income tax relief, or indexation of tax brackets. We will be using these new projections in the next round of submissions to the Tax Working Group to push for indexation.

Growing the pie vs dividing it

Overall, Budget 2018 is far more focused on dividing the pie than growing it.  With the exception of the already announced R&D tax credits, there is nothing to stimulate business confidence, industry, investment, and wages.

In terms of the R&D tax credit scheme, our view is that the breaks are marginally better than handing out corporate welfare grants (which are bureaucratic intensive with high transaction costs) but will almost certainly lead to gaming of the tax system.

In the weeks to come our team will be working through more of the detail, but in the mean time our initial comments to media are available here:

Thank you for your support in ensuring there is a strong voice for taxpayers in the corridors of power.

- $2.2 billion in additional funding for DHBs.

- $750 million in capital funding over the forecast period for hospitals and health infrastructure.

- $100 million in capital funding for deficit support will be available to DHBs in the 18/19 financial year.

- $394.9 million in capital funding for new schools and classrooms.

- $1 billion in funding for the Provincial Growth Fund, including:

- $245 million for the One Billion Trees planting programme over ten years.

$904.9 million in additional funding for Foreign Affairs, including:

- $190.7 million in direct funding to the Ministry of Foreign Affairs and Trade to hire an additional 50 diplomats and open an embassy in Sweden.

- $367.7 million in additional funding for the Defense and Veterans portfolios.

- $100 million for a 'Green Investment Fund' to invest in low-emissions projects and businesses.

- $181.6 million in additional funding for the Department of Conservation