No tax cuts announced, no surprise there. No tax cuts flagged for the future, very disappointing. No roll back of fiscal drag, or bracket creep, for people paying more tax simply because their pay has increased with inflation — unfair and deserving more attention than the brush off the Minister of Finance gave it despite the expected surpluses forecast in a few years time.

If there is one picture which sums up the budget it’s this: 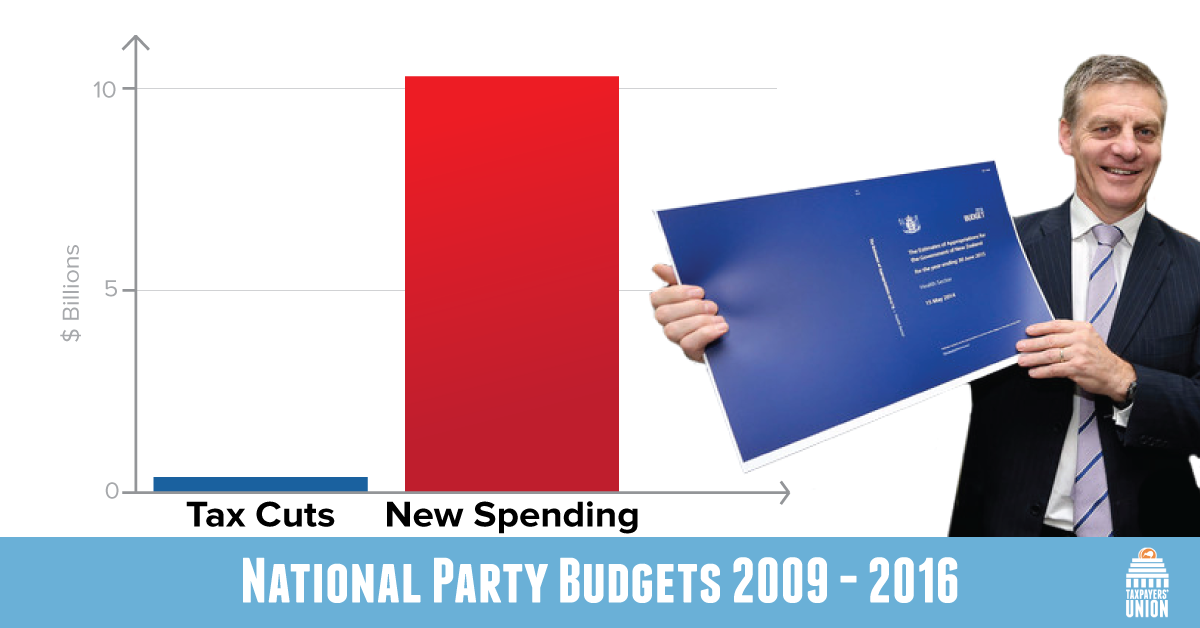 There’s more money for IRD’s new computer system ($857 million), the SME tax package already announced is reprised. There is to be legislation on international tax compliance, but on tax adjustments for companies and wage and salary earners, not a word in the official documents. Not a single word, hint, suggestion or even a tease about what might possibly come later. What’s new is the Government’s presentation conveniently lumped up into four packages:

But smokers get stung again with a further 10% increase in tax each year for from 2017 to 2020. In January the Taxpayers’ Union made public the Treasury’s advice that smokersalready pay more than three times the health costs of their habit.

Penalising people for voluntarily choosing a damaging habit is morally questionable when the very people who pay are those who can least afford it. But governments always ‘need’ more money.  The Budget forecasts the tax hike to take in an extra $280 million per year by 2021. The aim is to reduce the prevalence of smoking and one might ask if this extra tax is effective in achieving that, will it raise all the extra cash estimated ($425 million over four years). It may be possible to reduce smoking rates and raise a lot of extra money at the same time.

As we’ve pointed out numerous times, if the Government was genuine about reducing smoking rates (and it not also being influenced by the extra tax dollars) why hasn’t it legalised e-cigarettes, which are estimated by Public Health England to be at least 90% less harmful and are Britain’s number one smoking cessation tool?

The strategy to get back into surplus is applauded: balanced budgets are simply a basic requirement of sound government.

But for ordinary people without any special needs, there’s not much, unless you count a well managed, low inflation economy, currently growing more than most comparable countries.

Answering questions in the Budget lockup Bill English was asked about whether there was room to accommodate the Prime Minister’s suggestion of a $3 Billion tax cut package. Initially Mr English replied that this was a matter for future choices and reeled off a list of competing priorities: debt reduction, other spending pressures, investment opportunities, saving for the future (contributions to the Cullen Fund are to resume in 2020).

But later he added another claimant on the emerging surpluses and I quote “ensuring middle income earners don’t find themselves on the top tax rate”. This cuts in at $70 000, and as the average wage is forecast to rise to $63,000 by 2020, bracket creep will be a reality for many.

Which might just (on an optimistic construction) mean that the door is still open for compensation for fiscal drag. As it should be. The Parliamentary Library calculated for David Seymour MP that the lack of changes to compensate for inflation since 2010 means the government had collected $2.1 billion more in taxes.

The Taxpayers’ Union believes that all of this should be returned to taxpayers and that indexation of tax brackets should be introduced to prevent taxpayers being dependent on the political generosity of governments.

Click "read more" for our initial comments to media are listed below.

THE SIZE OF THE BEAST KEEPS GROWING

The Taxpayers’ Union is disappointed that despite today’s Budget showing healthy numbers the Government has failed to give any indication of when New Zealanders can expect tax relief.  Taxpayers’ Union Chairman, John Bishop, says:

“Today’s budget is a Labour-style ‘more taxes, more spending’ budget.  There isn’t even an indication when New Zealanders will be compensated for the $2.1 billion in extra taxes they’ve paid since 2010, thanks to income tax thresholds not raising with inflation.”

“Right now, the median income earner is paying $40 more per week in tax than they did when the current Government was elected.”

“While we welcome the extra money for health and infrastructure, taxpayers will be shocked that the Government is going to putting even more money into corporate welfare.”

“The strategy to get back into surplus is applauded: balanced budgets are simply a basic requirement of sound government. However, the one delivery ordinary kiwis were looking for — a boost in take home pay — is not there, and won’t come from the Government for some time yet, if ever. In that important respect Budget 2016 is a disappointment. It is politically defensive with nothing bold.”

“Today’s budget shows that there is in-fact ample fiscal room to reduce the burden of government but instead of adjustments which would just keep taxes as they are the Government is effectively saying that they can spend money better than the people who earned it.”

The Taxpayers’ Union is labelling the Government’s decision to hike taxes on smokers by 10% per year for the next four years as morally questionable. Jordan Williams, Executive Director of the Taxpayers’ Union, says:

“Smokers already pay more than three times the health costs of their habit. Penalising people for voluntarily choosing damaging habit is morally questionable when the very people who pay are those who can least afford it. But governments always ‘need’ more money and public health is a convenient excuse.”

“The socioeconomic make up of tobacco consumers means that these higher taxes land on those who can least afford it. It means the Budget is giving with one hand but taking with the other.”

“As we’ve pointed out numerous times, if the Government was genuine about reducing smoking rates — and it not also being influenced by the extra tax dollars — why hasn’t it legalised e-cigarettes, which are estimated by Public Health England to be at least 90% harmful and are Britain’s number one smoking cessation tool?”

Executive Director of the Taxpayers’ Union, Jordan Williams, says “While we all applaud the extra money for core science research and education, ‘Innovate New Zealand’ includes more than one hundred million dollars of new corporate welfare grants schemes covering regional, IT and digital start-ups.  It’s the definition of governments trying to pick winners.”

The Union is particularly scathing about the announced $4 million “Maori Innovation Fund”. Mr Williams says, “It is bad enough that the Government is using taxpayer money for corporate welfare but it’s now spending that money based on the skin colour of shareholders.”

“There is nothing innovative about corporate welfare, no matter what the politicians label it.”

The Government is throwing good money after bad regarding the extra $100 million boost to develop Auckland housing as announced in Budget 2016 according to theTaxpayers’ Union. Its Executive Director, Jordan Williams, says:

“Instead of cutting the regulatory taxes choking housing supply, once again politicians are trying fix a regulatory problem by trowing more money at it.”

“The solution to Auckland’s housing crisis is simple and free. Cut the regulatory red tape, adopt the Labour Party’s policy of abolishing Auckland Council’s metropolitan urban limit, and free up the limits on supply.”

“The only silver lining from today’s Budget announcements is reference to a new ‘National Policy Statement on Urban Development’.  A generation of renters are hoping that the Policy Statement comes soon and reins in those Councils that are holding up housing supply.”

“When National was elected they developed a ‘turn round plan’ so KiwiRail would stop coming cap in hand for hundreds of millions every year.  That plan failed, and the Government now has no plan whatsoever for KiwiRail to stand on its own two feet.”

“The amount spent on and written off by KiwiRail amounts to $3.4 billion since this Government was elected in 2008.  That is enough to have paid for return flights to London for every New Zealander.”

“Only politicians would throw good money after bad trying to breath life into a 19th century technology, when driverless cars and trucks are on the horizon.”

“The Emissions Trading Scheme is simply a tax by another name. The Government’s decision to phase out the two-for-one subsidy on emissions units amounts to a tax hike of $356 million over the next four years under another name.”

“The tax was introduced as a way for the Government to make transfers overseas relating to our international climate change obligations. Rather than lifting a ‘subsidy’, it is hiking the tax so that the Government can increase spending in other areas.”

“The changes to the ETS will will see motorists pay more for fuel despite duties and other taxes recently reaching more than 50% of the amount paid at the pump.”

“This Government is very good at increasing the burden of taxes in stealthy ways. Just like not adjusting income tax thresholds to match inflation, the Government will be hooping that this change will see New Zealanders pay it more without noticing.”