The New Zealand Taxpayers’ Union can reveal that The Spinoff have broken the terms of their agreement with IRD to publish content in their Tax Heroes project.

The Tax Heroes project, which featured a number of articles from writers associated with The Spinoff, intended to highlight the public good of paying taxes, and in doing so promote compliance with tax obligations among the public.

Due to an official information request, the Taxpayers’ Union can reveal that The Spinoff was paid $40,000 ($46,000 including GST) by the IRD to publish the series.

The IRD is required to be politically neutral – especially so for matters currently under consideration by Sir Michael Cullen’s Tax Working Group.

The Spinoff’s contract with the IRD specifically states: The Spinoff agrees not to refer to any political party or their policies in the content.

However, an IRD-branded article by Maria Slade, published on 31 March, ignores the contractual obligation. 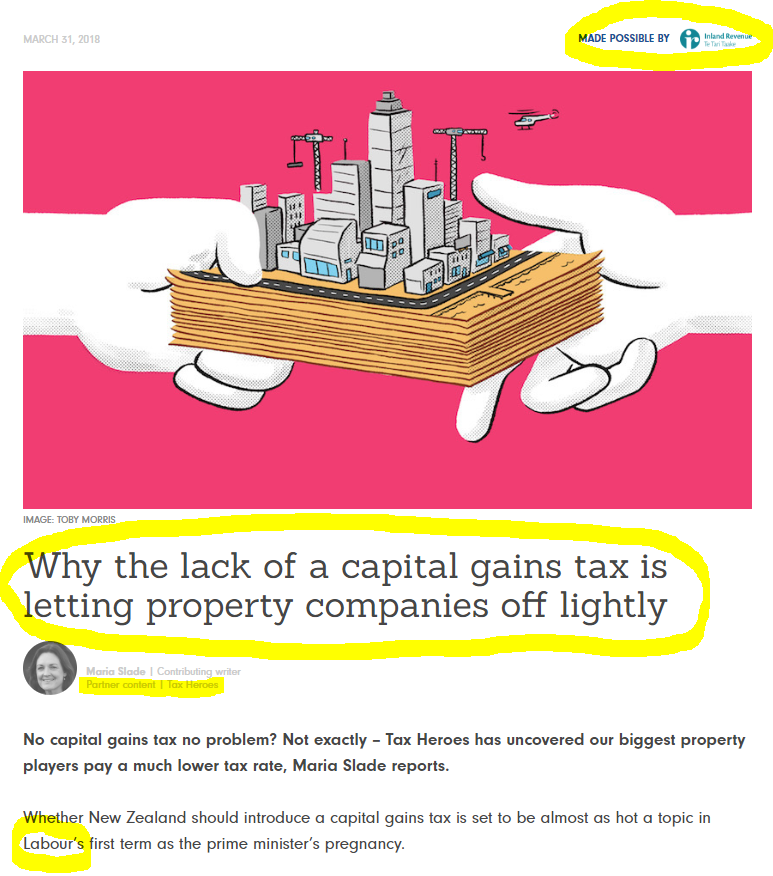 See also the disclosure statement at the end of the article:

Other overtly political articles bear the ‘Tax Heroes’ tag, but without IRD branding. IRD and The Spinoff must explain whether any of these articles were paid for with taxpayer funds.

If not, and IRD funding was only used for the articles labeled ‘partner content’, then the cost per article was approximately $6,600 – which seems extraordinary.

Taxpayer’s Union Executive Director Jordan Williams says, “The Spinoff appears to have misused $40,000 of taxpayers’ money to push a political message. It is disgraceful, and they should pay the money back."

“The IRD needs to be extremely careful about its place in our constitutional environment. Taxpayers expect our revenue collection service to be strictly apolitical. Any movement away from that norm is unacceptable.”

“Putting aside the breach of agreement, the Tax Heroes series was a terrible use of $40,000 in taxpayer money. The articles were effectively taxpayer-funded pro-tax propaganda, with the first article pushing the Orwellian message that ‘Tax is love’.”

“This kind of taxpayer-funded media rort may keep quasi-news platforms like The Spinoff afloat, but do it does no good for ordinary taxpayers. The IRD should not have been funding pay-for-play websites in the first place.”