Roadshow wrap-up: Here's what you made possible

Josh, Annabel and I have now returned the campervan to Auckland after the final leg of the Stop Three Waters roadshow in Northland. After five weeks and more than 5,000km on the road, the team is knackered but hugely encouraged by the support New Zealanders have shown. We did what the Government has not: listened to the communities concerned about the centralisation of community water assets, loss of control, and affordability.

Below is a small sample of pictures from the road. You can find many, many more on our Facebook page. 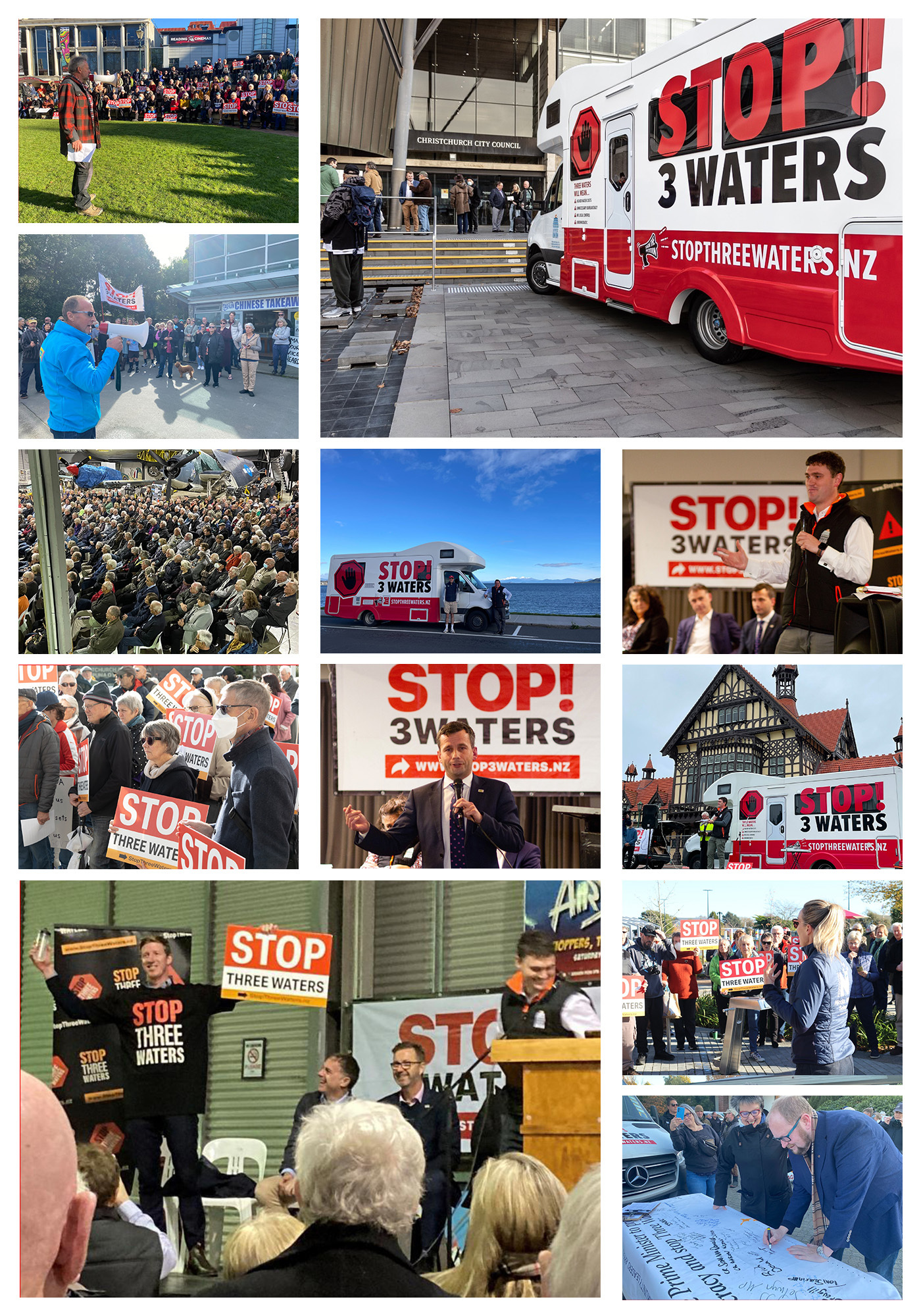 (Bottom left: New Zealand's newest member of Parliament Sam Uffindell modelled our Stop Three Waters t-shirt, coreflute sign, and drink bottle. You can pick up any of these from our shop!)

More than 10,000 New Zealanders turned out at our events at roadsides, town squares, and town halls from Invercargill to Kerikeri. We were joined by dozens of councillors, mayors, and MPs who spoke up for local democracy and signed our Community Leaders' Appeal calling on Jacinda Ardern to protect local democracy and stop Three Waters.

While the newsrooms in Auckland and Wellington might not reflect the concerns of New Zealanders about Three Waters, provincial media are far more connected to their audiences – the image below speaks for itself. 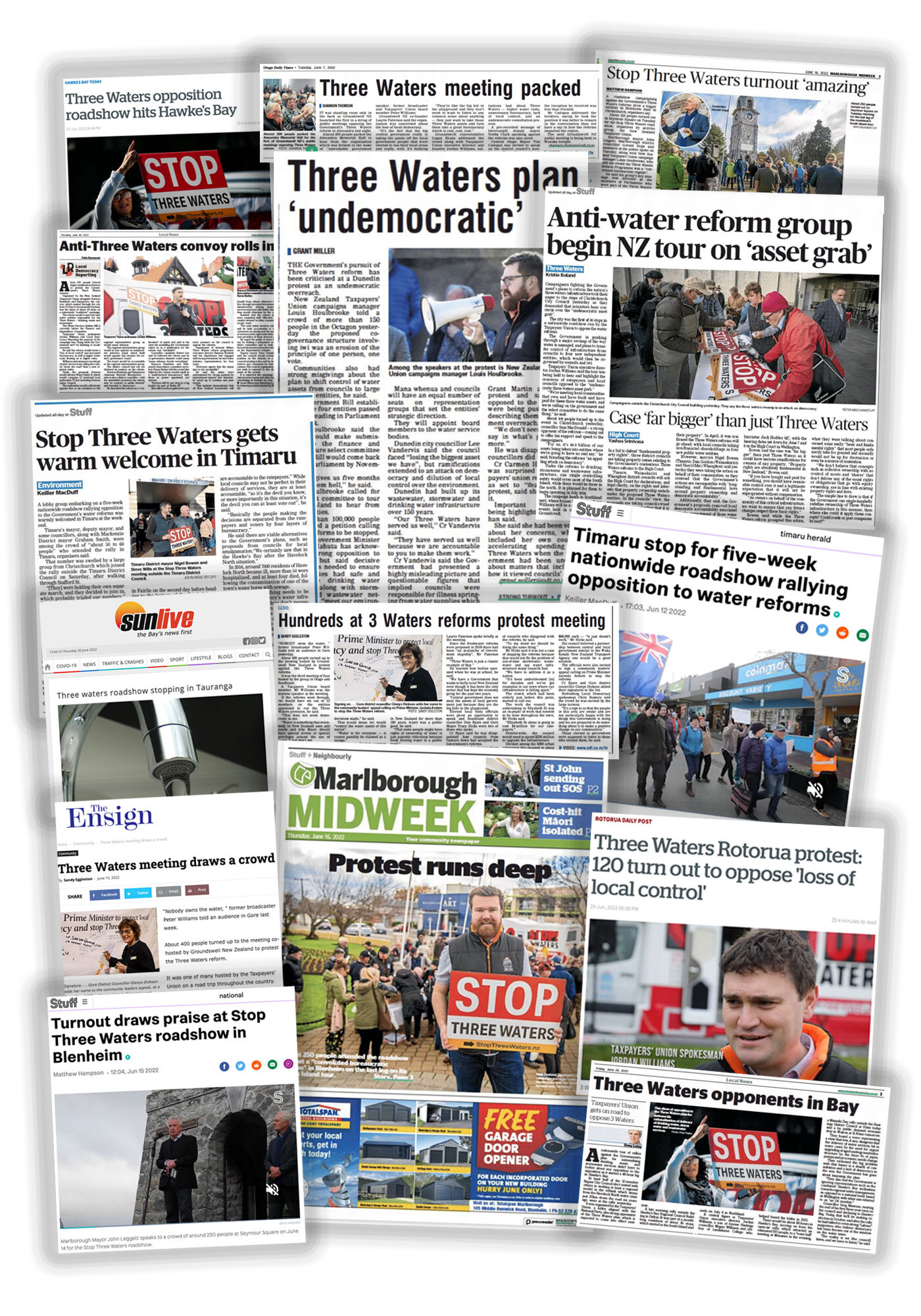 At our Tauranga event, we secured a major win: National's Local Government spokesman Simon Watts made a new commitment that National won't just repeal and replace Three Waters, but that their replacement will not include undemocratic co-governance. 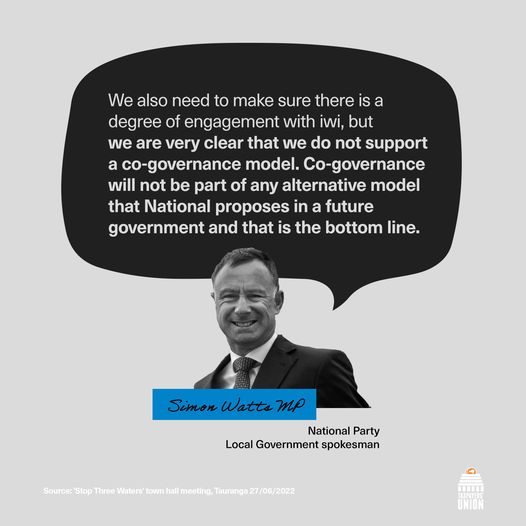 And if you thought we'd already plastered the country with 'Stop Three Waters' billboards, look again – supporters at our events picked up hundreds more to erect at prime roadside locations. Not to mention the thousands of stickers and coreflute signs now on car bumpers and fences in every corner of New Zealand. Again, you can pick up a banner for outside your place from our shop. 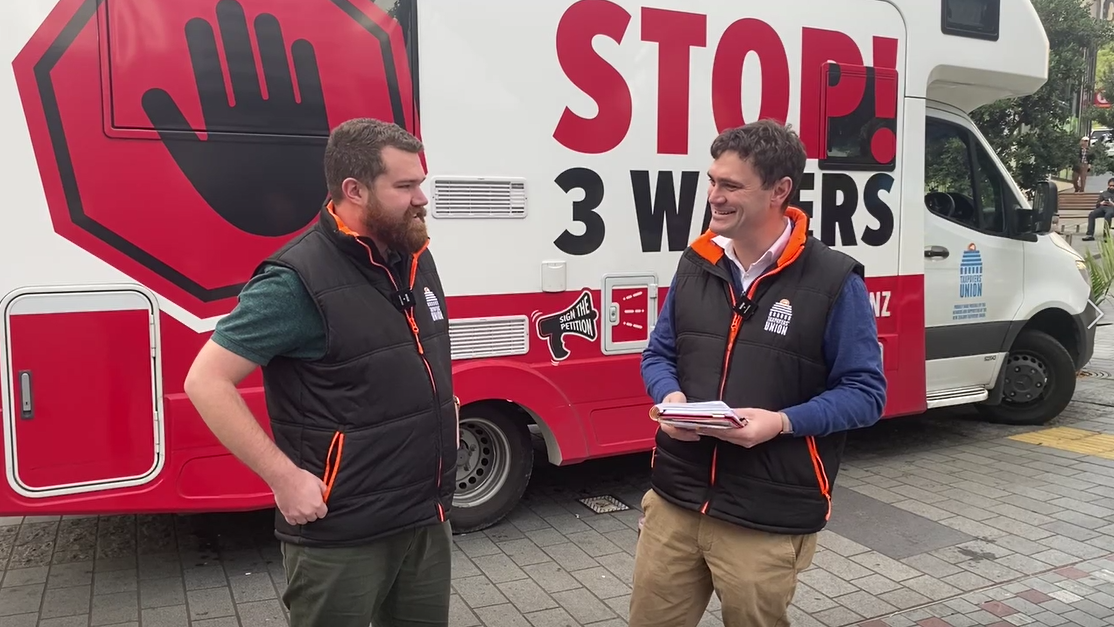 Click here to watch Jordan and I reflect on an incredible five weeks.

For all the team, one of the highlights of the Roadshow was the chance to meet Taxpayers' Union supporters up and down the country, put faces to names, and thank the people who make our work possible.

We want to thank the thousands of people – good and decent New Zealanders who believe in localism, democracy, and accountable, affordable water services – who have chipped in financially and made this effort possible. Our polling shows clearly that we are shifting the dial, with more and more New Zealanders now opposing Nanaia Mahuta's Three Waters.

We've succeeded in keeping local councils laser-focused on the Three Waters threat, and local representatives are now repeating our message to Parliament's Select Committee running public consultation: the MPs need to hit the road like we did, and hear submissions face-to-face in the communities affected.

How we Stop Three Waters: next phase of the campaign

It's now crunch time. Parliament's Finance and Expenditure Select Committee is now taking submissions from the public on the key enabling legislation for the Three Waters regime.

We've made it easy to submit on the Three Waters Bill: 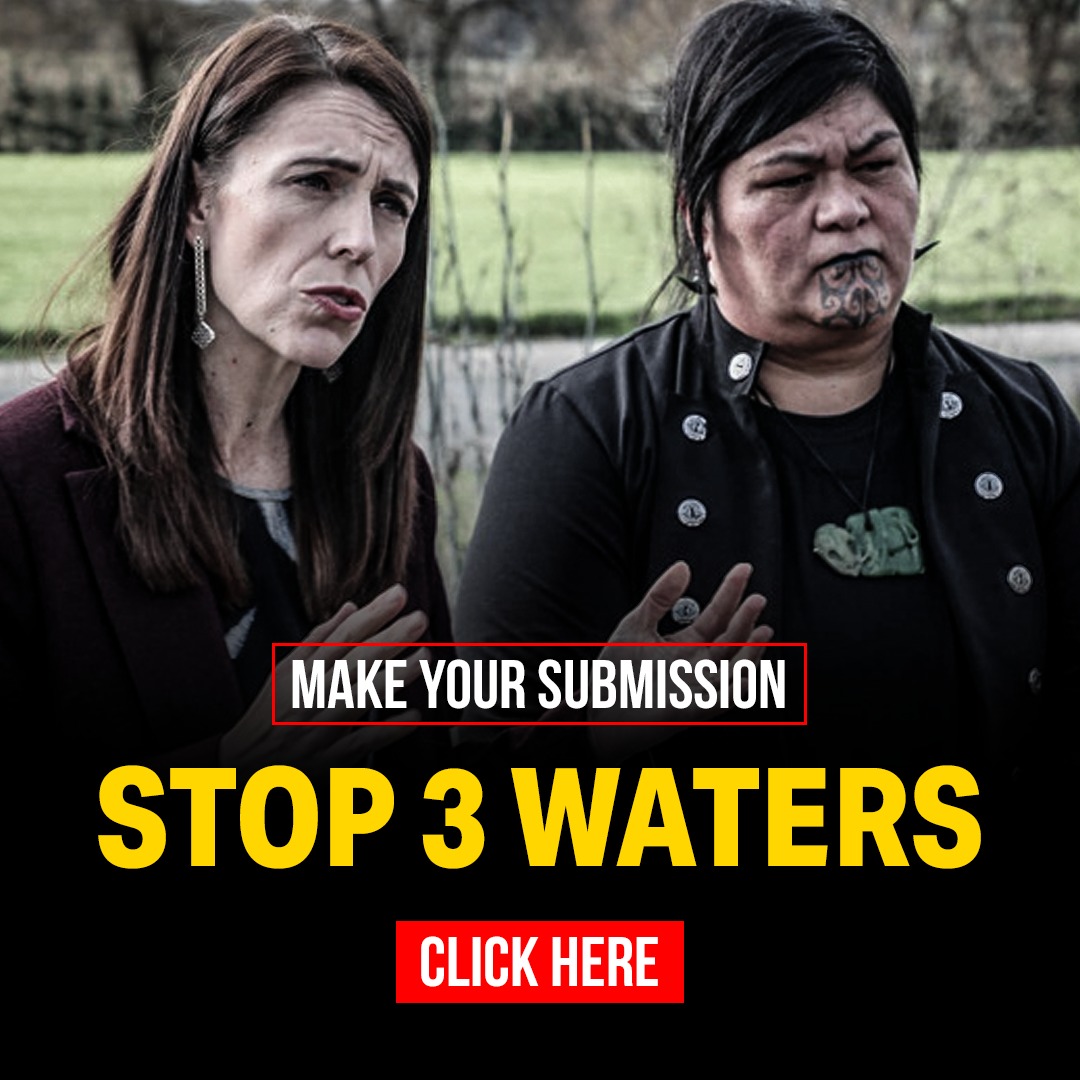 Submissions close on 22 July, and we're asking everyone who has signed the official Stop Three Waters petition to make their voice heard.

Our Three Waters submission tool makes it easy for you to write a basic submission, with suggested points that will be sent straight to the Committee. It takes as little as two minutes and we're encouraging everyone to customise and add your own comments so the Government can't write it off as a 'form submission'.

Alternatively, you can prepare a submission from scratch using Parliament's submission page.

It is crucial that we dominate this submission process so Nanaia Mahuta cannot claim to have popular support for her legislation.

Click here to make a submission to Stop the Three Waters legislation.

Once written submissions close, Parliamentary convention requires the Committee to hear oral submissions from those who've requested to speak. This is a major opportunity to slow down the legislation. In fact, we're calling on the Committee to travel the country and hear local concerns in the communities directly affected – just as we've done with our Stop Three Waters roadshow.

Even if Nanaia Mahuta is determined to push her legislation through Parliament, together we can maximise the political damage by ensuring that a newly-elected Government has a clear mandate to scrap Three Waters.

PS. We've been able to spearhead the campaign against Three Waters thanks to the thousands of New Zealanders who have chipped into the fighting fund so far. On behalf of all of us, thank you for making this work possible!

Stuff  The Ardern Government is in a death spiral with no hope … or is it?