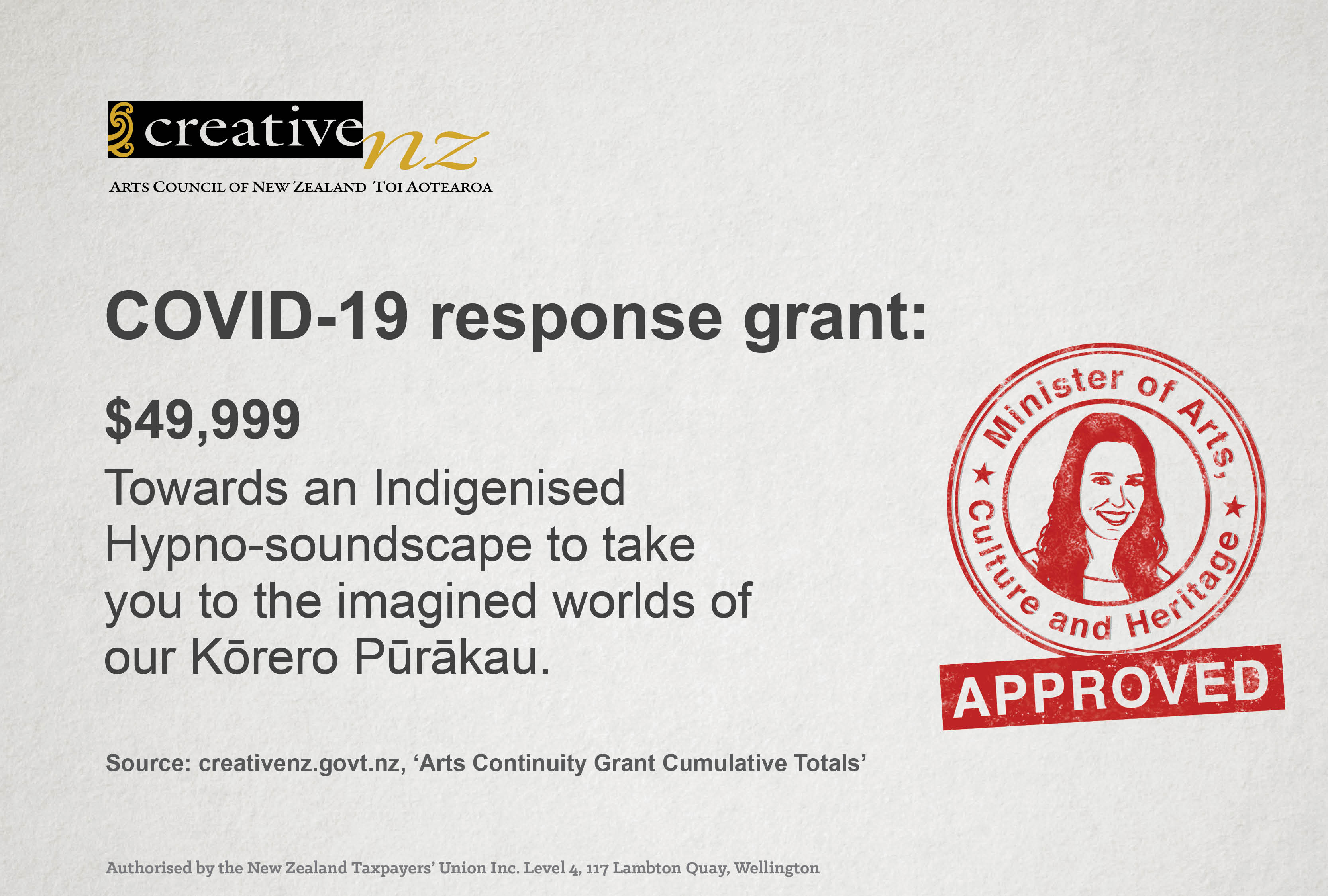 We've spent the last week on social media releasing examples of bizarre art projects given taxpayer money by Creative NZ as part of a $16 million COVID-19 response (I've linked to my favourites at the bottom this email).

Last night, the agency finally cracked under pressure. But instead of defending the bizarre grants, it attacked us for what it called a "low blow"!

Creative New Zealand is proud to tautoko dedicated, hard-working artists, bolstering a sector knocked to its knees by the impact of COVID-19.

We work to encourage, promote, support and advocate for the arts for the benefit of all New Zealanders — from Bluff to Cape Reinga and beyond, through projects of all shapes and sizes, communities and cultures, glitter and all.

We’re really shocked and disappointed at recent low blow targeting of artists we’ve funded – we stand by them and our decisions. We don’t condone attacks on the arts whānau, or anyone for that matter. To the arts community and supporters: We’re with you, and we value your mahi.

They just don't get it. We're not targeting artists – we're targeting the out-of-touch bureaucrats who waste taxpayer money on weird pet projects.

Creative NZ's attempt to defend themselves is going badly. Take a look at the comments slamming the agency on their own Facebook post.

I joined Magic Talk again today to discuss the drama – and this time, the CEO of Creative NZ fronted up to make his case.

In the interview, the CEO admits that artists don't even need to live in New Zealand in order to be eligible for taxpayer funds. Indeed, a number of the grants we looked into were for artists based overseas.

The CEO also admits he doesn't know what an 'indigenised hypno-soundscape' is – despite spending $50,000 on one.

Listen to the second half of this clip to hear the trainwreck interview.

We're proud of our efforts to shed light on how taxpayer-funded agencies spend our hard-earned money. With the Debt Monster forecast to grow to $150,000 per Kiwi household in 2034, our job is more important than ever.

To research and write the first draft of a novel about male affection in hypermasculine spaces.
AWARDED: $13,000

Towards the composition, recording and production of music inspired by the psychogeography of the West Coast.
AWARDED: $34,900

To support the personnel costs and post-production editing for an art documentary based on Papua New Guinea tattoo practice and revival.
AWARDED: $27,500

Towards one phase of illustrating a biography of Leonardo da Vinci.
AWARDED: $21,080

To create and develop an online publication, arts learning resources and musical content based on children's drag theatre show, The Glitter Garden.
AWARDED: $18,000

To create a new series of collaborative quilts with my mother, textile artist Cynthia Johnson.
AWARDED: $17,850

Towards the composition and instrumental arrangement of 10 songs for children, from ideas given by children.
AWARDED: $24,600

Towards a live event watch party and livechat with fans online.
AWARDED: $24,153

Towards writing poetry that explores indigeneity and love in the time of climate change.
AWARDED: $17,798

Towards writing a novel about the collapse of democracy in an association of alpaca breeders.
AWARDED: $26,000

Towards a dance concept video showcasing the impact Coronavirus has had on the New Zealand Chinese community.
AWARDED: $24,500

Towards the development of a first draft of a play that explores the menstrual cycle.
AWARDED: $16,766

To record and livestream a performance from Fat Freddy's Drop.
AWARDED: $44,007

Towards an Indigenised Hypno-soundscape to take you to the imagined worlds of our Kōrero Pūrākau.
AWARDED: $49,999

Towards development of a movement technique that guides and empowers the participants in becoming specialists in their own body.
AWARDED: $4,530

Towards composing and recording ten original compositions inspired by emotions felt during the Covid-19 lockdown.
AWARDED: $8,885