Internet Mana has today today confirmed it would make tertiary education free — but added a new wrinkle: a pledge to "Develop a comprehensive loan forgiveness programme for those with existing debt."

The party says it will also introduce a universal student allowance.

The debt write-off scheme would be phased in from 2016 and be "funded from a variety of sources."

We believe the policy would result in a dramatic wealth transfer from middle class taxpayers to the lawyers, accountants, doctors and professionals who have large student loans, but are also likely to be on good incomes.

With student loan debt is currently $14.2 billion, forgiving it would cost, on average, $8,374 per household - that cost alone is more expensive that all the election policies of the mainstream political parties combined!

“The student loan scheme is currently in the government’s books at $8 billion, not the $14.2 billion the Taxpayers’ Union cites, and reversing the tax cuts that benefited those high-earners – as Internet MANA proposes – would provide $1 billion per year, some of which could be used for debt relief for those struggling with their student debt burden on low incomes.” 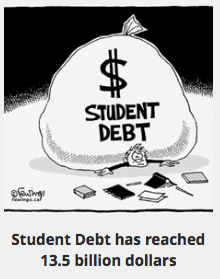 $14.2 billion is the estimated nominal value (including accrued interest) of all student loan borrowings. It is the figure that the NZUSA usually use in publicly and advocacy for 'the burden of debt'. The amount represents $8,374 per household.

It’s a nice try by the NZUSA to use a discounted value, but the fact remains that forgiving student debt would cost $8,374 per household.

Mr Haines also claimed in his media release that repaying a debt is a tax. In fact, the tax is on the middle income earners who pay the interest on his degree, while he reaps the rewards of a subsidised tertiary education.

A student loan represents a choice made by an individual to accrue debt in the short term in order to better their employment prospects in the long term and, in turn, their earning potential. As ridiculous as the suggestion that all student debt would be wiped, is NZUSA's inference that Kiwis' mortgages, hire purchase payments and monthly credit card bills are taxes too.

* Refer to note 13 on page 101 of the Pre-election Economic and Fiscal Update. More comprehensive information on Student Loans, including nominal debt and carrying value are available on the Ministry of Education's student loan annual report.