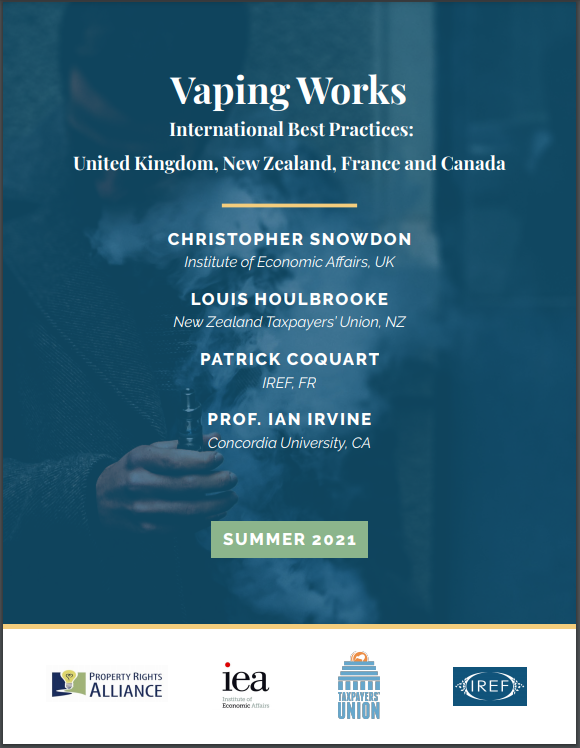 A new white paper on international best practice towards vaping regulation features a case study on New Zealand, with data showing how increased vaping uptake has correlated with significant progress towards our Smokefree goal.

The white paper is published by the Property Rights Alliance, with contributions from the UK, New Zealand, France, and Canada. The New Zealand case study is written by New Zealand Taxpayers’ Union Campaigns Manager Louis Houlbrooke.

Mr Houlbrooke says, “Historically, public health commentators have attributed reductions in smoking rates to annual excise tax hikes. But now, despite an end to annual tax hikes, we see progress accelerating. This latest data makes it increasingly difficult to deny that it is alternative products like e-cigarettes – not tax – that will ultimately bring New Zealand to our Smokefree goal. However, the question remains to what extent our progress will be slowed by new regulations currently being implemented to reduce access to vaping products.”

Commenting on the white paper, Centre of Research Excellence Director Dr Marewa Glover says, “Enabling people to switch from smoking to vaping is not only delivering on reducing risk to health, the New Zealand experience is proof that access to vaping can reduce inequity in smoking rates. Despite the FCTC saying countries should ensure that Indigenous peoples also benefit from tobacco control measures, the gap in smoking rates between Māori and  European New Zealanders has never been reduced. The higher rates of daily vaping among Māori compared to European New Zealanders is the first sign that this inequity may be lessened. It is significant also, that daily vaping prevalence increases in line with higher deprivation. The lower the income quintile the higher the smoking prevalence, but also the higher daily vaping occurs.”

The white paper has been published ahead of the WHO’s COP9 conference, which will be attended by delegates from across the world as they consider updates to the Framework Convention on Tobacco Control.

“We’re urging New Zealand’s delegates to tell our story with pride," says Mr Houlbrooke. "During our long period of essentially unregulated access to vaping products, the sky did not fall – in fact, smokers took the opportunity to switch in droves. This success has been reflected by the Government’s own information campaign on vaping, which highlights vaping as an effective means to quit smoking, with a 95 percent reduction in harm relative to cigarettes.”

This morning Mr Houlbrooke joined a live webinar hosted by the Property Rights Alliance along with contributors to the white paper. Click here to watch the recording.