The Taxpayers’ Union can reveal the Ministry of Business, Innovation and Employment is using taxpayer money to bribe workers into joining the Public Service Association.

The following email was circulated to all MBIE staff and has been passed on to the Taxpayers’ Union. It reveals that, as a result of recent pay negotiations, MBIE will be paying a one-off $500 bonus to members of the PSA.

The Labour-led Government is bribing MBIE staff to join the union – meaning they’ll start paying membership dues immediately. No doubt any additional income to the PSA will be used to fund campaigns for higher taxes, more public spending, and to keep the current Government in power in 2020. It is disgraceful. 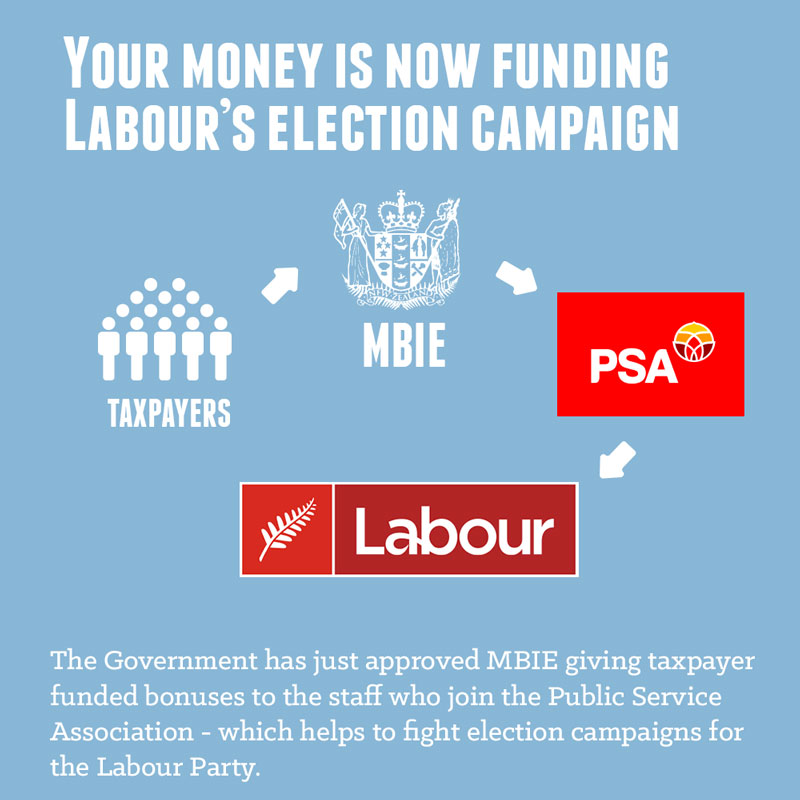 Labour Party members will be thrilled that the Government is already diverting taxpayers' money for a left-wing campaign war chest for the 2020 election, but taxpayers watching debt projections creep higher by the day will be disgusted by the brazen take-over of the country's public finances.

If the shoe was on the other foot and a National-led Government was giving subsidies for businesses to join pro-National lobby groups there would be a march to Parliament, a book by Nicky Hager, and a prime-time television exposé. Rightly so: pay-deals should not be weaponised for political purposes.

Instead, it's just another example of Union bosses claiming the moral high-ground in politics while playing by another set of rules, all at the expense of the humble taxpayer.

We have now launched a petition against this 'Union-Welfare' and handouts.  Click here to add your name.