The Taxpayers' Union and the Wellington Chamber of Commerce are mulling legal action against the Wellington City Council's decision to restrict it choice of security contractors to those paying a 'living wage'. We've told the the National Business Review that if the Chamber don't, we will almost certainly hold the Council (and Councillors) to account for deliberately ignoring its own legal advice and plowing forward with a measure that imposes more costs on ratepayers, including those earning minimum wage, for absolutely no gain. Click here to read the media coverage.

Our Research Fellow, Jim Rose, has written the following analysis of the decision from an economic perspective.

The upshot of the Wellington City Council paying a living wage to employees and including those of sub-contractors is over time the composition of their low skilled labour force will change. The Council will recruit people who can earn in other jobs $19.25. Workers who don't have the capability of producing at that level of productivity will never be interviewed. 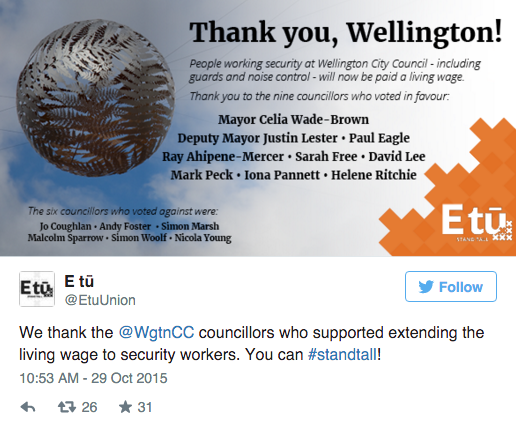 The Council is required by law to recruit on merit and to be a good employer. Workers who would never have previously applied for Wellington City Council jobs covered by the living wage decision because they can earn better pay elsewhere will now do so because of the higher pay of these council jobs.

A living wage is an exclusionary policy where ordinary workers, often with families who are not productive enough to produce $19.25 per hour plus overheads will never be interviewed by the Wellington City Council or council subcontractors for a job covered by the living wage increase.

The living wage adopted by the Wellington City Council is a classic case of rent capitalisation. With the council paying over the odds for a job, workers will have every incentive to compete for the higher wages. The most obvious way of winning that race for these limited number of higher paying jobs is to be a more productive worker than the other job applicants. 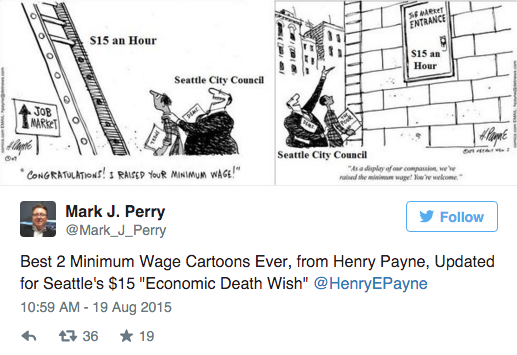 The existing employees of the Wellington City Council and its subcontractors will be locked into golden handcuffs. Workers who lack the labour productivity to command a wage equivalent of the living wage elsewhere in the job market will never quit. Wellington City Council employees covered by the living wage will also have a much reduced incentive to up-skill will seek promotion. There will be no internal reward for undertaking additional training or job responsibilities among low skilled is because the living wage will mean they will not get a wage rise at the Council.

Any extra labour productivity from a living wage at the Wellington City Council is in doubt because low skilled service sectors are notorious for their low potential for productivity gains. They are the bread-and-butter of Baumol’s disease. 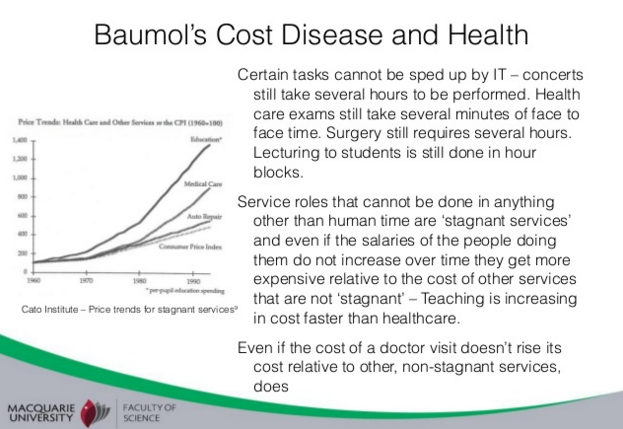 It’s kicking the Wellington City Council when it is down to mention that low paid workers with families will lose a considerable part of the living wage increase because of reductions in their family tax credits – reductions in the Working for Families in-work tax credit. Any living wage increase at the Wellington City Council is the subject of multiple clawbacks by IRD. There is income tax, a 25% abatement rate on Working for Families tax credits on any family income above about $36,000 and 15% GST. All in all, the transfer out of the pockets of ratepayers to IRD would be at least one-third. 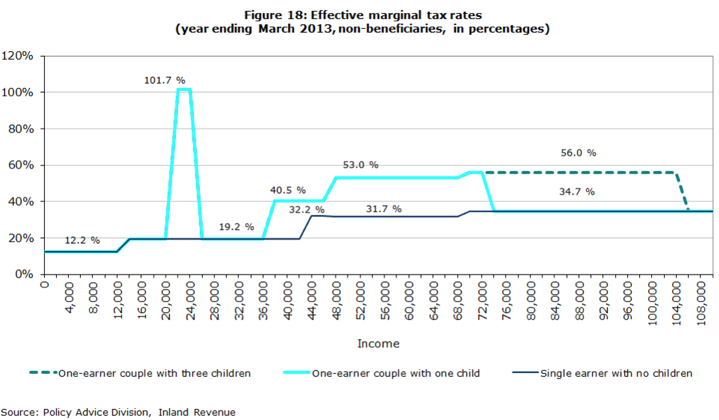 I have not included any accommodation supplement, childcare subsidy or community services card the low paid worker is receiving from WINZ. The winding back of these social benefits to the low paid worker and his or her family is a pointless transfer from Wellington City ratepayers to the national taxpayer.

It will be kicking Wellington City Council even further to remind of the enforcement and compliance costs of living wage ordinances in the USA at the city level.

The Wellington City Council this week acted against legal advice to require contractors under joint services agreements with other councils in the Wellington region to pay employees who work within the boundaries of Wellington city the living wage. The American cities had to define the minimum number of hours in a day that minimum wage workers who are mobile for their jobs had to spend within their city limits before their employer was subject to their living wage ordinance.

It is standard to put forward an efficiency wage argument for a living wage. The higher wage paid as result of the introduction of the living wage will motivate workers to work harder and cheer each other on. 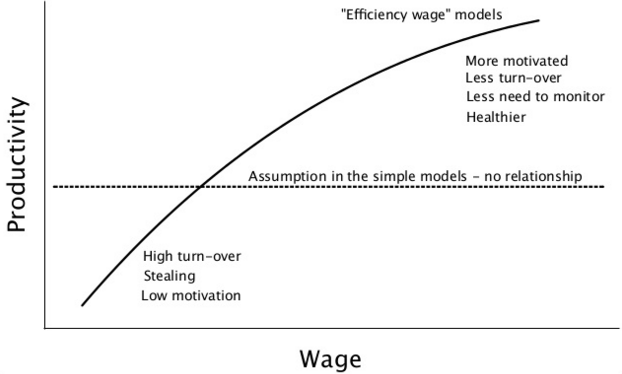 This additional effort and greater motivation from the efficiency wage, from the above market rate of pay, will reduce the costs of supervision to the employer of teams of employees as well as increase output per worker. This is supposed to offset some of the costs of the living wage increase.

At bottom, this efficiency wage hypothesis is entrepreneurs are unaware of the higher quality and greater self-motivation of better paid recruits for vacancies but wise bureaucrats and farsighted politicians notice these gaps in the market. Bureaucrats and politicians notice these gaps in the market before those who gain from superior entrepreneur alertness to hitherto untapped opportunities for profit do so and instead leave that money on the table.

I won’t mention that many of the modern theories of the firm focus, in part or in full on reducing opportunistic behaviour, cheating and fraud in employment relationships. The cost of discovering prices and making and enforcing contracts and getting what you pay for are central to the Coase’s theory of the firm put forward in 1937.

In Barzel’s (1982) theory of the firm, measurement costs drive the emergence and organisation of the firm. The firm arose to minimising the cost of measuring what is to be exchanged by bringing some of those measuring tasks in-house. Much of the organisation of the firm, including the degree of vertical and horizontal integration and many different forms of contracting are driven by ensuring owners and managers get what they pay for and are not overcharged through manipulation or cheating.

Alchian and Demsetz’s (1972) theory of the firm focused on moral hazard in team production. As they explain:

The main rationale in personnel economics from everything ranging from employer funding of retirement pensions to the structure of promotions and executive pay including stock options is around better rewarding self-motivating employees and reducing the costs of monitoring employee effort.

The profits of entrepreneurs for running a firm is directly linked from their successful policing of the efforts of employees and sub-contractors to ensure the team and each member perform as promised and individual rewards matched individual contributions (Alchian and Demsetz 1972; Barzel 1987). The entrepreneur is a residual claimant to the revenues of the firm net of paying all other inputs. Entrepreneurs must successfully police the contributions of their employers and contractors if they are to survive in competition. The better they are at this, the more the alert entrepreneur profits.

Every profit minded entrepreneur seeks to hire the group of workers with the lowest cost per unit of output produced by them. Those that do not will not survive in competition with more alert rivals. The trade-off between worker quality and wages in setting hiring standards is a routine entrepreneurial decision in every firm when recruiting:

Managers often say that their goal in hiring is to obtain the best quality workers. It sounds like a good idea, but is it? The most productive workers are also likely to be the most expensive. Should the goal instead be to hire the least expensive workers? …The best worker is not the cheapest, nor the most productive, but the one with the highest ratio of productivity to cost. We should hire as long as the marginal productivity of the last worker hired is greater than or equal to the cost of the worker. 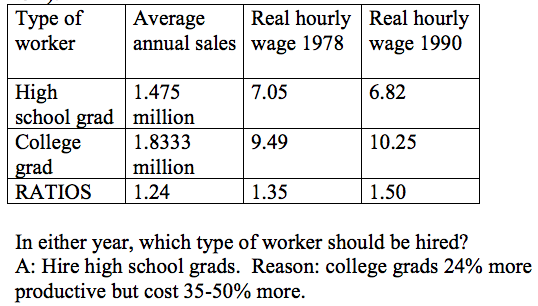 This blog was originally published at Jim's blog Utopia - You Are Standing In It! and has been republished with his permission.