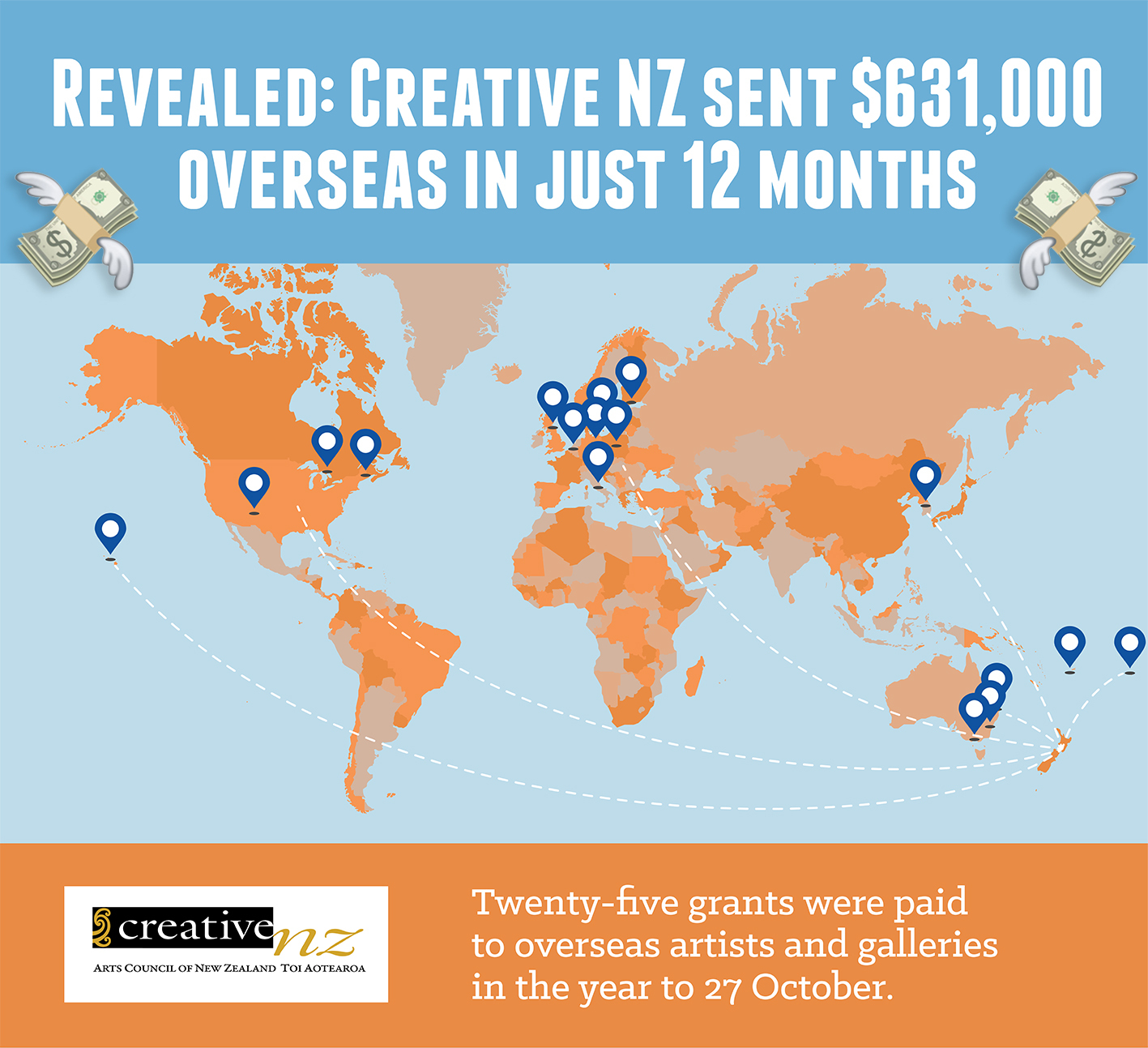 The New Zealand Taxpayers’ Union can reveal that in just 12 months Creative NZ paid out grants worth $631,266 to recipients in Germany, the UK, Sweden, Finland, Australia, Poland, South Korea, Fiji, the Netherlands, the Cook Islands, and the United States.

Of the 25 grants, nine were from the agency’s general Arts Grant fund, while a further 15 came from the Arts Continuity Grant, which was established in response to COVID-19. One grant was from the Arts Pasifika Awards fund.

• Ngahiraka Mason, who resides in the USA, was given $24,000 towards “a reflective, comparative and critical piece of writing”.
• Brian Falkner in Australia was given $13,334 towards “writing a new novel set in an all too possible near future”.
• Susie Elliot, who is Fijian and resides in Fiji, was given $11,790.99 towards “wage, materials, production costs, travel and accommodation to create and develop a new body of illustrations and video works”.
• Luke Thompson, based in the United Kingdom, was awarded $42,000 towards “intensive research and development”.

The Union discovered this spending in an official information request. In its response, Creative NZ confirmed it does not require grant recipients to be New Zealand citizens. In fact, recipients included completely foreign entities such as the United Kingdom’s Royal Academy of Arts, which was paid $75,000 to exhibit paintings by New Zealand artist Rita Angus.

It’s galling that while Kiwi families were grappling with the economic effects of the worst pandemic in living memory, Creative NZ sent hundreds of thousands of dollars overseas to high-flying arts luvvies and international art houses.

At least when Creative NZ gave someone $50,000 to make an ‘indigenised hypno-soundscape’, that money was being spent in New Zealand. But the cash Creative NZ sends overseas is a total loss for the local economy. We don’t even get back the GST.

This kind of profligate spending undermines the Government’s economic response to COVID-19 and insults local taxpayers who are being told to buckle up for a massive spike in Government debt.

Many taxpayers will look at this spending and conclude that Creative NZ must be grossly overfunded. If Grant Robertson is at all interested in cutting wasteful spending in this year’s Budget, he knows where to look.