The Union is encouraging New Zealanders to go to axethistax.nz and use the email tool to tell Jacinda Ardern and Winston Peters how the tax will hit their family.

Taxpayers’ Union Executive Director Jordan Williams says “The capital gains tax proposed by Dr Cullen and the Tax Working Group would be the least fair and most punitive in the world, and would apply to small businesses, farms, shares, and property. We are calling on the Government to Axe this Tax by rejecting the Working Group’s recommendations outright.”

“Our role in this campaign is to make it easier for taxpayers to navigate the Wellington bureaucracy to ensure politicians hear from those who will be personally affected by the tax. That’s why as a first step of the campaign we’re providing taxpayers with a tool to tell Jacinda Ardern and Winston Peters to reject the capital gains tax.”

“This is also a public education campaign to increase awareness of the scope of the proposed tax. With the support of our thousands of donors, we have full page newspaper adverts (see below) running across the country and a major digital campaign launching today.” 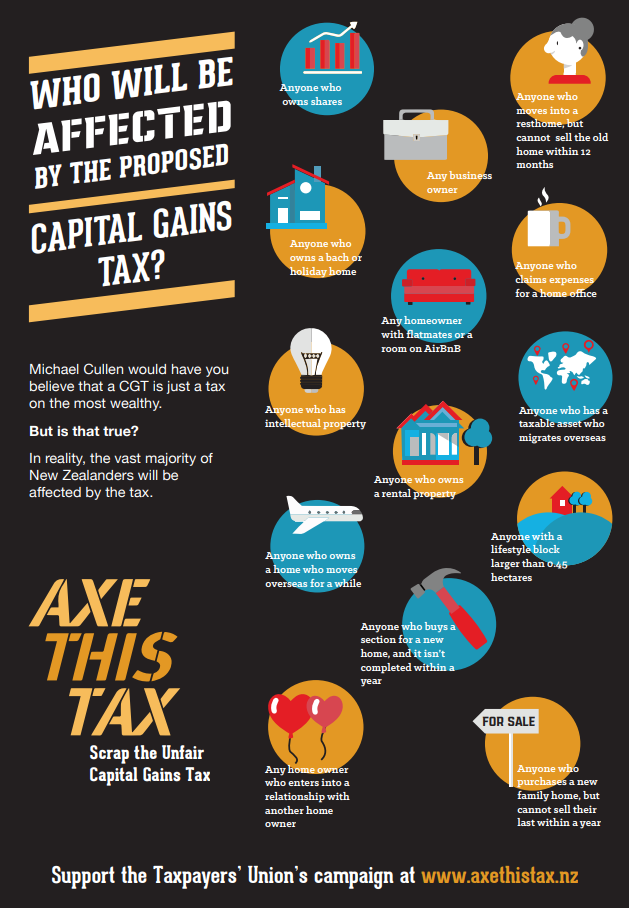 “While Dr Cullen is trying to convince the public that this is a tax on the wealthy, most New Zealanders will be hit by the tax at some point in their life. If you own your own home but have flatmates, live on a lifestyle block, have a small business, have a rental property for retirement, or have a KiwiSaver account, you will be targeted under Dr Cullen’s proposals.”

More information on the Taxpayers’ Union’s campaign to Axe this Tax can be found at the campaign website www.axethistax.nz.