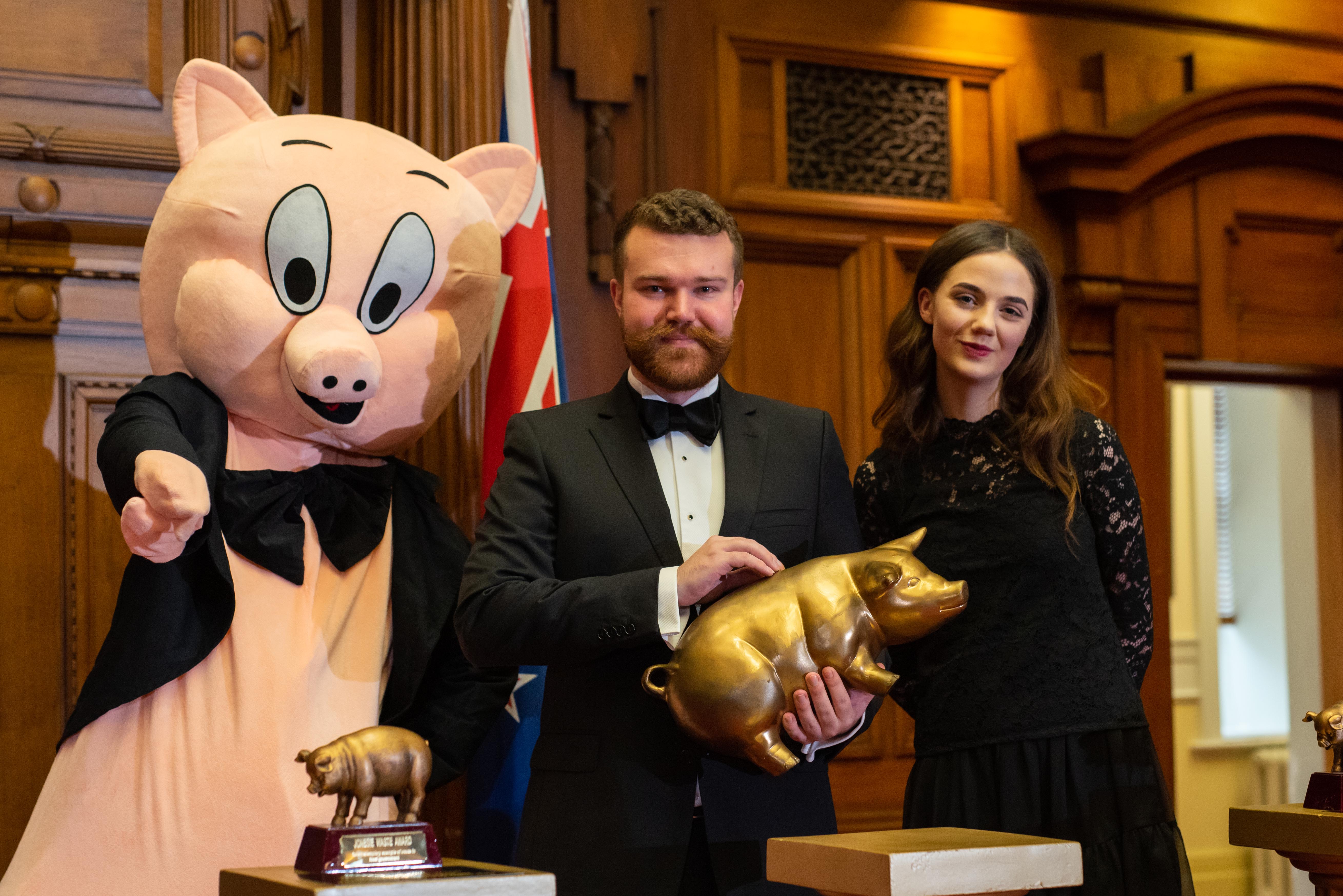 The third annual Jonesie Awards were hosted at Parliament today, celebrating the best of the worst of Government waste.

Every year, we host a glamourous Oscars-style award ceremony to highlight and lament the most absurd examples of wasted taxpayer money to emerge in the last 12 months.

Behind the tuxedos and gilded statuettes is a serious message: politicians and bureaucrats in both local and central government happily fritter away your hard-earned money on bizarre pet projects and ill-planned schemes without fear of consequence.

The Jonesies serve as a shot across the bow for anyone in charge of a government chequebook: rein in the waste, or see your name up in lights at the next Jonesie Awards.

Dunedin City Council responded to COVID-19 by spending $40,000 on red and blue dots for its main street. The dots were variously justified as a tool to assist social distancing, a way to attract people to the city, and as a “traffic calming” device. The Council also spent $145,000 on a new tourism slogan: “Dunedin, a pretty good plan D”.

After a series of headline-grabbing failures, Napier City Council gave its CEO Wayne Jack a reported $1 million payout to leave before his contract expired. Mr Jack’s final official act was to throw himself a $4,000 farewell tea party. The Mayor complained that she was not invited.

When nine-term councillor Andy Foster was unexpectedly elected Mayor last year, he promptly enrolled himself in a $30,000 leadership course at Arrowtown’s Millbrook estate. However, he has refused to say what, if anything, he learned – and has since spent more money on a team facilitator to smooth over problems on his Council.

Auckland Council installed 17 kilometres of temporary cycleway in response to COVID-19. Like Dunedin’s dots, the initiative was intended to assist social distancing. All works had to be reversed in a matter of weeks. The total cost is estimated to be more than a million dollars.

As part of his initiative to make Parliament more “family-friendly”, the Speaker of the House commissioned the construction of a playground on Parliament’s lawn. The playground, which essentially consists of a slide and some stepping stones, was budgeted at $400,000, but ultimately cost $572,000.

An $87 million package to give students the means to study remotely during COVID-19 lockdown resulted in thousands of unwanted modems being sent to wealthy schools. Epsom’s Auckland Grammar alone received 137 unwanted modems, and even Mike Hosking’s child was a beneficiary of the policy.

The Regional Economic Development Minister re-opened the Wairoa-Napier rail line last year, predicting that up to six train services would run per week. As of last month, only three services had run in total: a cost of more than $2 million per train trip.

In response to a tourism downturn due to COVID-19, Tourism Minister Kelvin Davis singled out one of Queenstown’s most successful businesses – AJ Hackett Bungy – for a taxpayer handout. AJ Hackett received a $5.1 million grant, plus a potential $5.1 million loan, all on top of its substantial payout received under the COVID-19 wage subsidy scheme.

First elected as a list MP in 2008, Phillip Stoner Twyford was thrust into power as Minister of Housing, Urban Development, and Transport in 2017.

His most high-profile election promise was to build 100,000 KiwiBuild homes in 10 years, with an initial investment of $2 billion. Two years into that period, KiwiBuild has delivered just 395 houses – fewer than the number of houses blocked by protestors at Ihumātao. At the current rate, Phil Twyford’s promise will be fulfilled in 436 years.

Even with the taxpayer subsidy, these homes are too expensive or located in places people don’t want to buy. As a result, many finished homes have sat on the market for six months or more, and the Government has promised to buy back homes that do not sell.

However, his record of waste now extends far further than KiwiBuild. As Transport Minister, Twyford blew out the cost of SkyPath – a cycleway across Auckland’s Harbour Bridge – from $67 million to $360 million, with more cost increases expected once construction actually begins.

Twyford has also increased fuel taxes by 12 cents per litre – and even more in Auckland – across three years.

This tax hike was justified on the basis of paying for light rail from Auckland Central, down Dominion Road to the airport. Last month, after two and a half years and $5 million was spent investigating the project, the light rail proposal was shelved.

Despite the main justification for fuel tax hikes being void, Twyford has no plans to reverse his increases to the tax on commuters.

In his maiden speech in Parliament, he remarked: “At the end of our times here, some of us will be remembered, but most of us will not.”

He need not worry. We are confident that taxpayers will never forget Phillip Stoner Twyford.