Report: 102 Ways to Save Money in Local Government 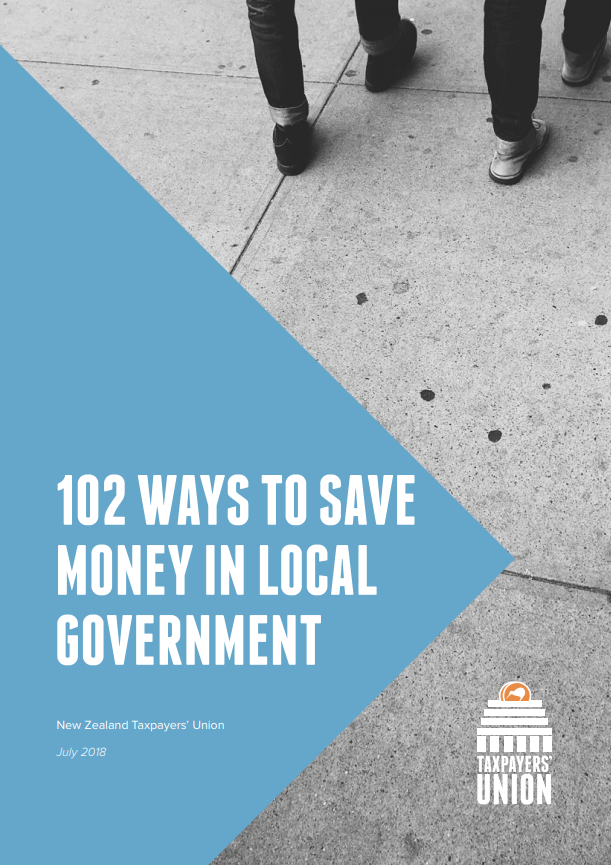 The New Zealand Taxpayers’ Union has today released 102 Ways to Save Money in Local Government – a report that lists big and small opportunities for local councils to save money and reduce the burden on ratepayers.

The 102 suggestions, many of which were provided to the Union by mayors across the country, range from the common-sense to the novel. Taken together, they serve as a challenge to unimaginative and undisciplined councils who allow wasteful spending to accumulate and then tell ratepayers to expect rate hikes.

The Taxpayers’ Union advocates instead for a culture where fiscal prudence is not a cause for celebration, but an expectation, just as it is within private organisations and households across the country.

New Plymouth Mayor Neil Holdom, in a foreword to the report, says, “I support this Taxpayers’ Union initiative to highlight opportunities for councils, large and small, to identify savings or efficiencies in their operations to minimise costs to ratepayers and deliver value. While I do not advocate some of the more radical ideas which the authors of this document have included, no doubt to grab a few headlines, I celebrate those who are committed to sharing ideas and encouraging open and honest debate.”

Auckland Ratepayers' Alliance spokesperson Jo Holmes says, “Some of the initiatives included in this report run the risk of being dismissed as mere common sense. We don’t mind a dose of common sense where it saves money at the town hall - exactly what ratepayers are calling for.”

The Taxpayers’ Union would like to thank the Mayors who responded to the Union's invitation to submit ideas and examples of how their councils have saved ratepayer money.