It has been a good week for ratepayers and taxpayers with a big swing against 'tax and spend' candidates across most of the country in the local body elections. For Labour, many commentators are saying it's a warning. So too is our latest poll, released just now. 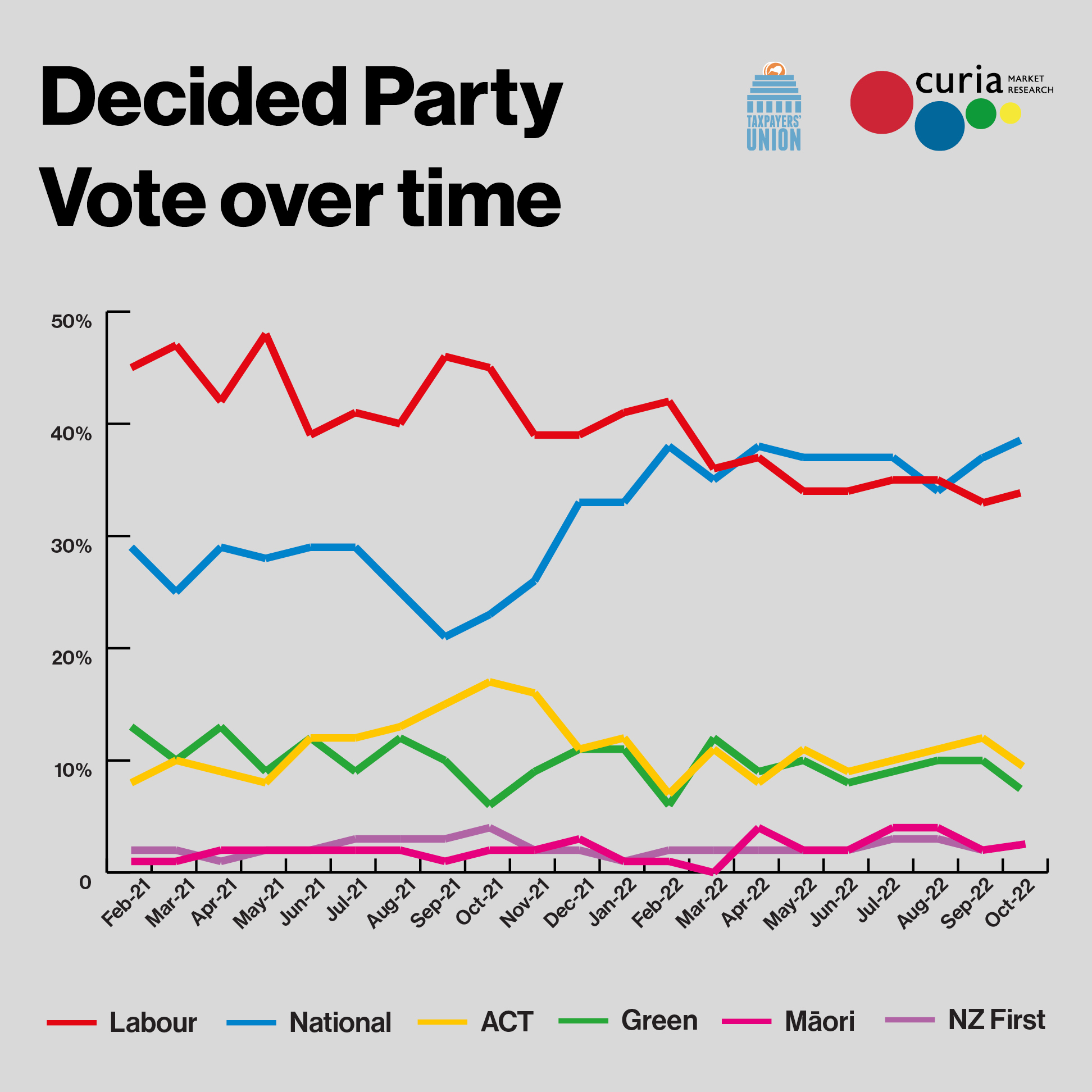 Exclusive to supporters like you, this month's Taxpayers' Union-Curia Poll shows that National and ACT are on track to form the next government.

National increases its support by a further two points from September to 39% in October while Labour is also up one point to 34%. ACT drops two to 10% and the Greens are also down one to 9%. 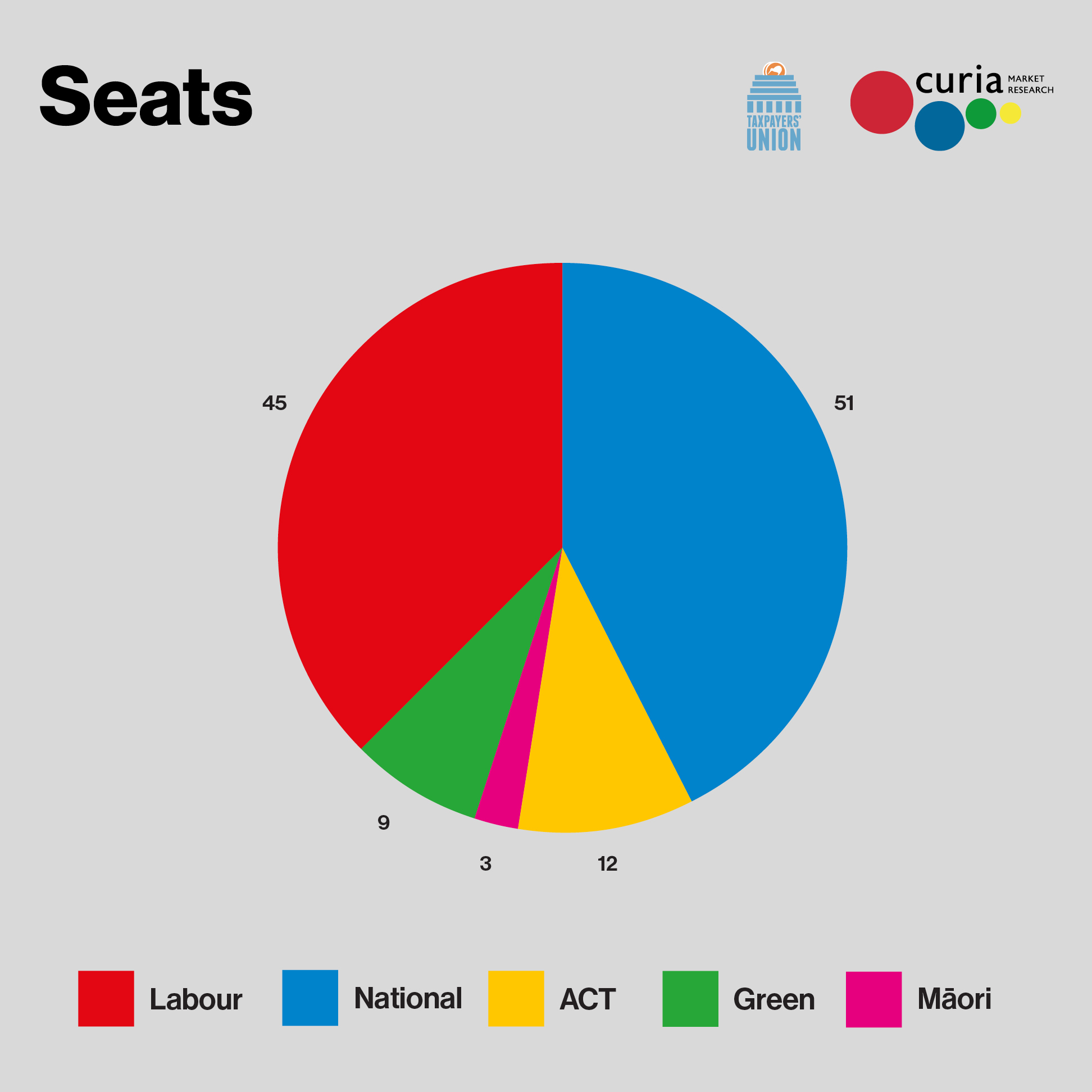 On these numbers, the centre-Right could govern alone (i.e without the Māori Party) on 63 seats (no change from last month). The Centre-Left drops one seat from 55 to 54. Both National and Labour have gained seats at the expense of their potential coalition partners, ACT and the Greens. The Māori Party also picks up an extra seat to take them to 3. 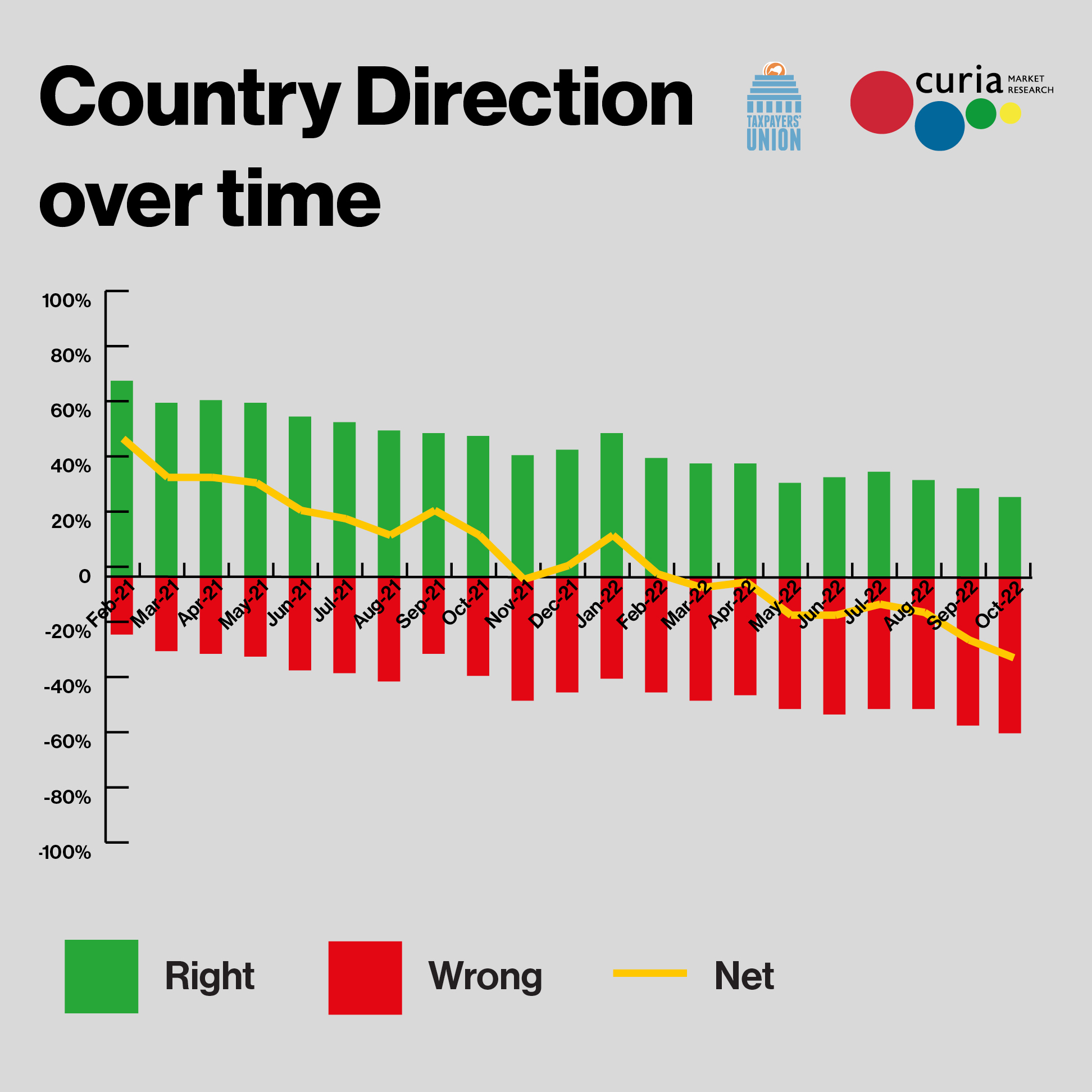 Head over to our website for more on the poll. 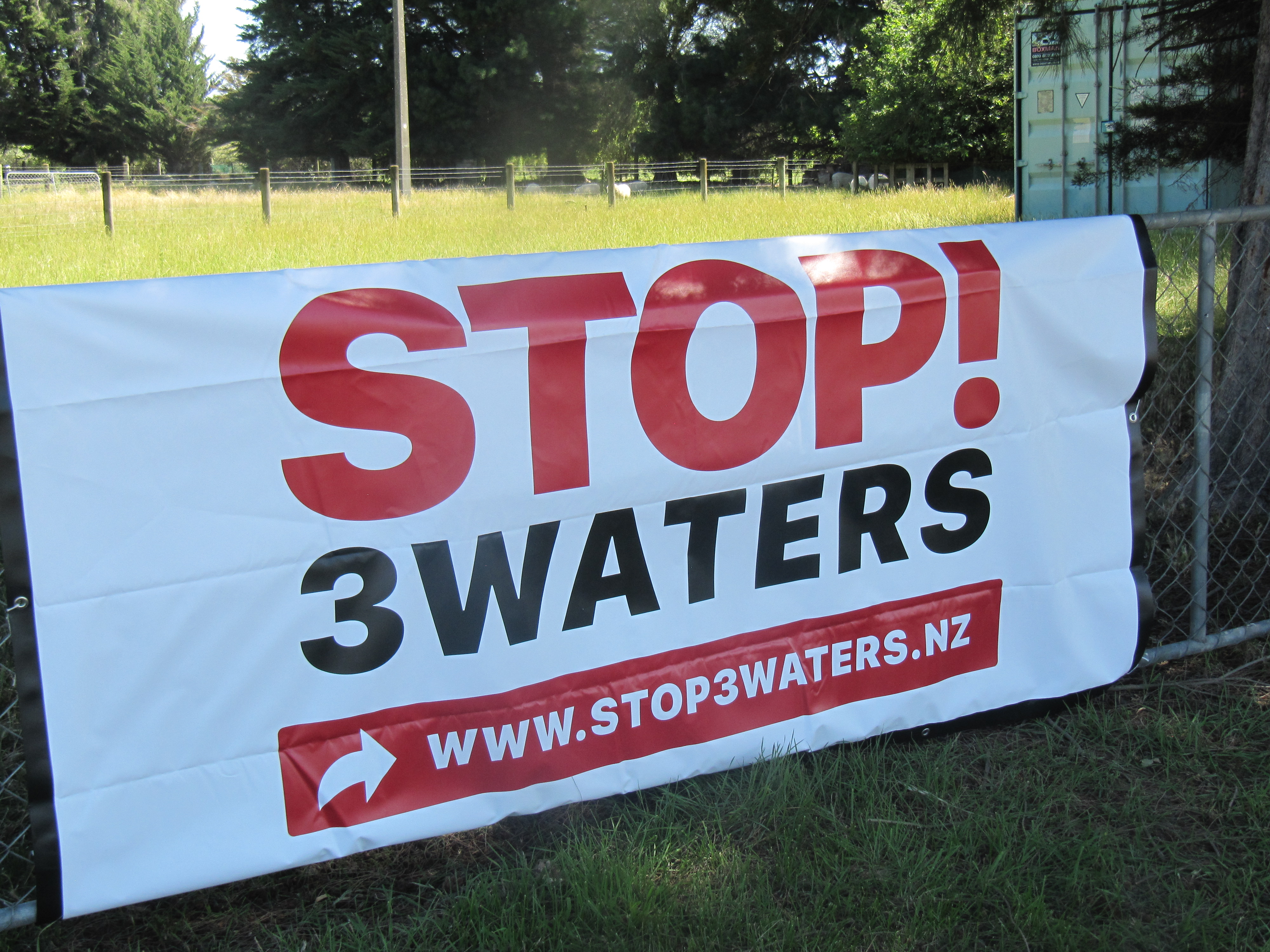 As you know, the team have been hard at work in recent months ensuring that voters knew where councillor and mayoral candidates stood on the Three Waters reforms before they cast their ballots. Our online How to Vote site put this information at constituents' fingertips while we also supplied hundreds of banners to Three Waters-opposing candidates up and down the country.

Our Stop Three Waters efforts paid off at the ballot box. According to analysis by the Newsroom webiste based on survey data, 76 per cent of newly elected councillors oppose the Government’s Three Waters reforms. Even the taxpayer-funded, hard-left lifestyle website, "The Spinoff", reported that two thirds of of incoming mayors are against the Government's water/co-goverance proposals.

This is a great victory for democracy and common sense — thank you to all of our supporters who made it possible.

While the Government has indicated that it is 'open to changes', the battle is not yet over. In the coming weeks, we need to keep up the pressure to stop these ridiculous proposals once and for all.

You will recall the success the Taxpayers’ Union had earlier this year in convincing the Government to reduce the fuel tax by 25 cents per litre. This has been a major relief to hardworking taxpayers as the cost of living has continued to bite.

But the Government currently plans to hike fuel taxes back up to their previous level in January. This could not come at a worse time with inflation above 7 per cent, interest rates still on the rise and international pressures pushing up petrol prices.

Surely even this Government couldn't be so cruel as to push them up even further? This week, we called on them to do the decent thing and rule out hiking the fuel tax until the cost of living crisis is over and inflation is back under control at the very least.

Fortunately, Transport Minister Micheal Wood is listening - last week he ruled out postponing the tax hike, but in media interviews this week, he's not so sure. Watch this space. 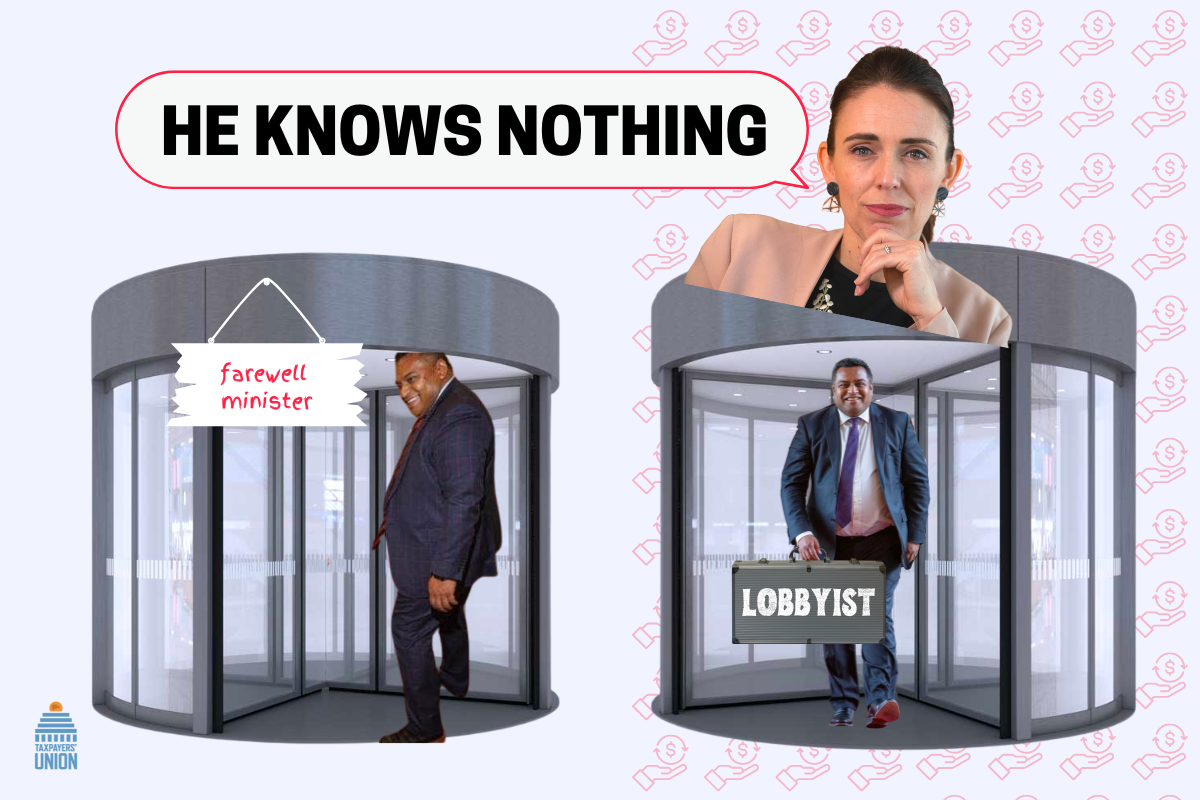 The Prime Minister doesn't seem to think there is anything wrong with Kris Faafoi's transformation from cabinet minister into political lobbyist in just the space of a few months. She even had the gaul to suggest that he knows nothing more than what is in Labour’s election manifesto. Every New Zealander can see it’s nonsense on stilts.

While it is great to see that National and the Greens have come out against this practice, we need action—not words.

That's why this week your humble Taxpayers' Union made the public offer to work with any MP – regardless of their party – who is willing to nominate a Parliamentary Bill banning Ministers going straight from the Government into businesses selling access to and information about what goes on in the Beehive.

It should be a privilege to represent New Zealanders in parliament — not a means of making personal profits. New Zealand is out of step with other Westminster-style democracies that have laws preventing ministers lobbying their colleagues so soon after leaving office. All this political merry-go-round serves to do is undermine trust in our democratic system. Let’s stop it.

This week on Taxpayer Talk with Peter Williams 🎙️🎧

This week on Taxpayer Talk, Peter is joined by David Round, a former Canterbury University law lecturer, to discuss the Treaty of Waitangi and co-governance. As an expert in the fields of Legal History, Constitutional Law, Jurisprudence and Environmental Law, David is well-equipped to comment on some of the most pressing debates of our time.