Taxpayer Update: What on earth happened to the COVID-19 response fund?

None of us can know what the coming weeks will bring, but like the first time around, the Taxpayers' Union team is working from home laser-focused on demanding more efficient spending in Wellington.

Lockdowns – and their inevitable economic consequences – make every dollar of taxpayer money even more precious.

Grant Robertson is again dipping into his $50 billion COVID-19 response fund to keep businesses afloat with wage subsidies. But there's a big problem: most of the fund has already been allocated to projects announced last year. Remember horse tracks for COVID? "Jobs for Nature" – which cost $200,000 per low-paying job created?

We hate to say "told you so", but all that dipping into the rainy-day-fund now looks very silly. Today's newsletter has some more examples.

Remember: this is all borrowed money, set to be repaid by future generations of taxpayers with interest. 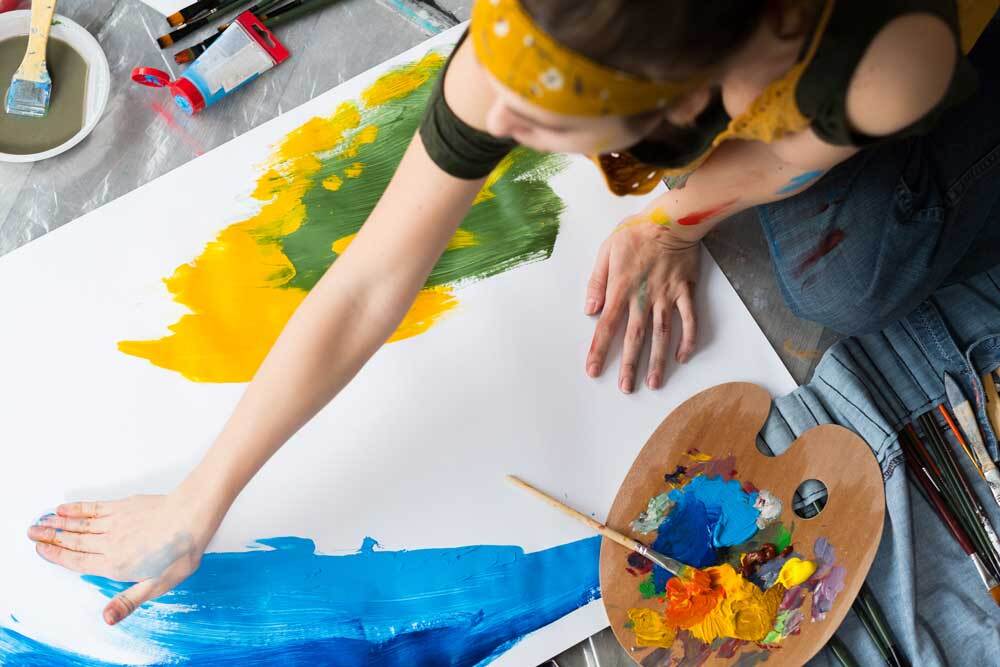 I wish we were joking. Minister Carmel Sepuloni is spending $17 million on "creative spaces" for "marginalised" New Zealanders to "build up their confidence and self-esteem" and gain "a sense of fulfilment".

You can browse the full list of grants here.

We've previously highlighted dodgy COVID-19 arts grants, but at least they had a vague link to the pandemic (i.e. projects that could be progressed during lockdown). Now, Creative NZ is just grifting us.

Sorry to say it, but art therapy is not an established inoculant for COVID-19. Nor does art therapy work as an economic response to the pandemic when there are so many more vital projects in health and infrastructure.

If the Government really wants to throw hundreds of millions of dollars at art projects, so be it – but at least drop the pretense that this has anything to do with COVID-19. 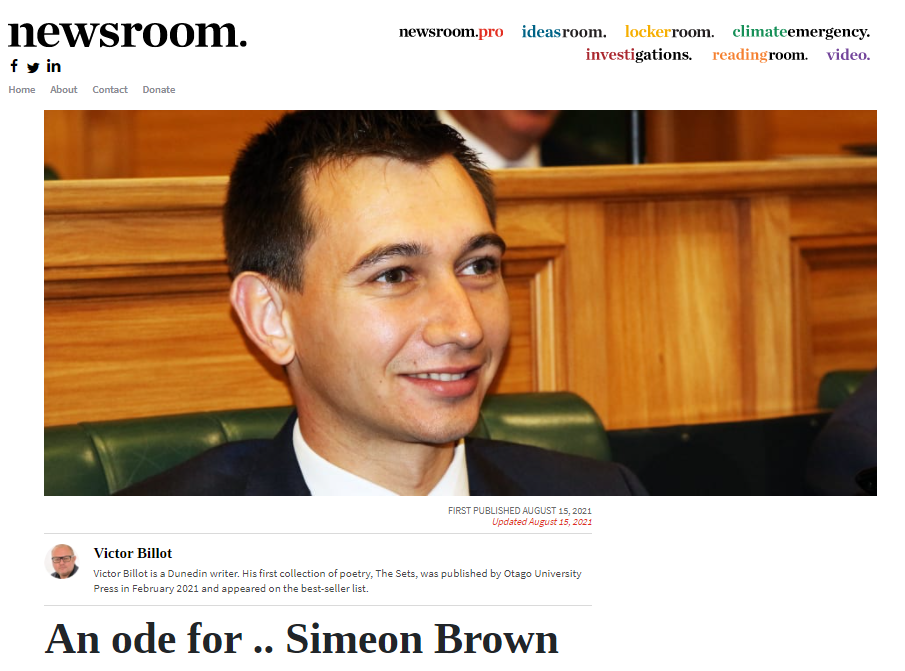 Here's another howler from Creative NZ.

You might remember how they're funding a series of poorly-written political poems for Newsroom. The latest taxpayer-funded effort from Victor Billot characterises National MP Simeon Brown as a far-right colonialist lamenting “natives refusing to die off”.

It's a nasty, slanderous diatribe. And like the grants above, this poem is technically part of the Government's COVID-19 response!

We say Creative NZ shouldn't be funding any political material. But the arts agency has grown out of control, frenzied on an injection of taxpayer funding post-COVID. They’ve hijacked a crisis in order to commission reactionary woke propaganda. 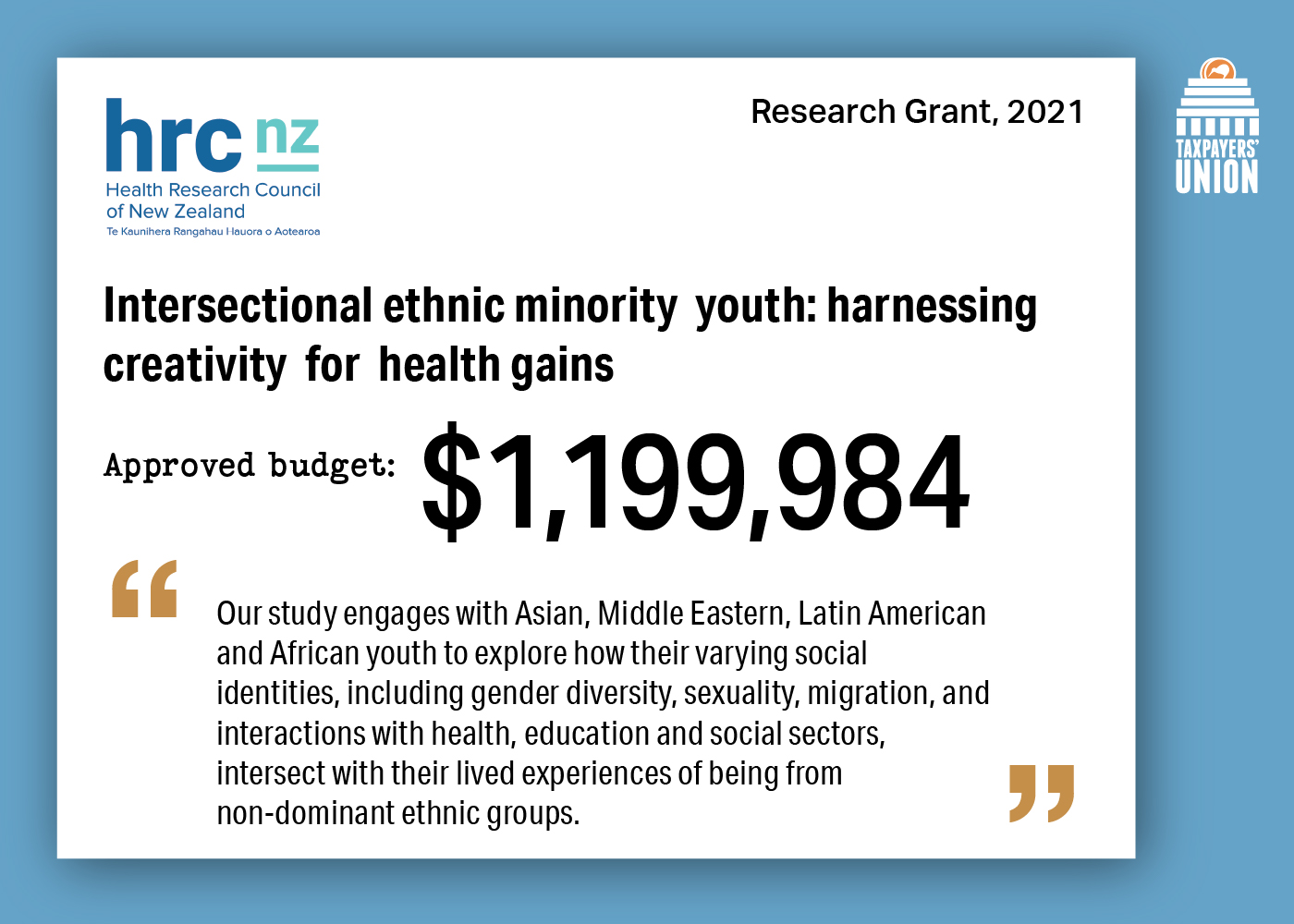 Health Minister Andrew Little is crowing about the latest round of taxpayer-funded research grants handed out by the Health Research Council.

He probably wasn't expecting anyone to look at the grants too closely – but your humble Taxpayers' Union did.

Here are some highlights:

This spending is an insult to New Zealand's COVID-19 response. In fact, only a tiny fraction of the projects have anything to do with the pandemic or vaccinations.

Frankly, it's disgraceful that research in the hard medical sciences is forced to compete for the same pool of funding as vague and uber-PC academic papers about decolonisation, intersectionality, and traditional Māori knowledge. 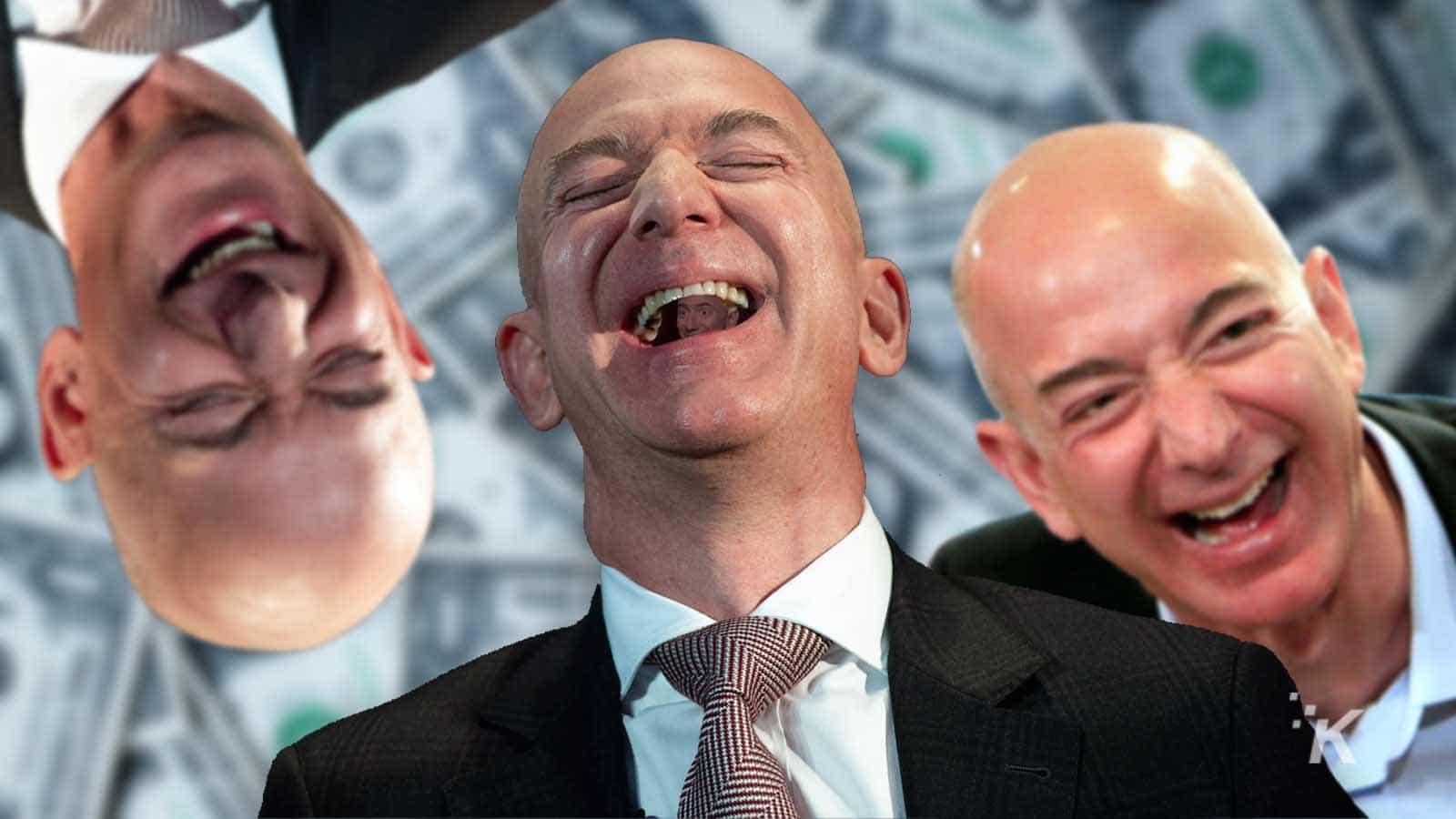 Remember how the Government offered $162 million to Amazon so they'd film their Lord of the Rings TV series here?

That decision was justified on the basis that Amazon could bring another four TV seasons and even a spinoff series to New Zealand. But now, after just one season in New Zealand, Amazon is shifting production to the UK.

The Government has now learned firsthand why Jeff Bezos is the richest man on Earth. Amazon successfully played the New Zealand and UK governments off each other to secure one massive handout after another.

As we’ve warned time and time again, the only way to win the film subsidy game is to not play. Both National and Labour-led Governments have naively been drawn into taxpayer-funded bidding wars to woo film productions. The truth is that we cannot outbid richer countries forever.

We're sending a wreath to our friends at the UK TaxPayers’ Alliance in commiserations for the massive sum that Britain's taxpayers will be forking out to appease Amazon.

It's Tim to say goodbye

Sir Tim Shadbolt is New Zealand’s longest serving Mayor, certainly one of the best known, and definitely one of the most beloved, both in his home of Invercargill and around the country.

But a recent video of an extraordinary council meeting reveals the sad truth: Sir Tim is no longer capable of doing his job. 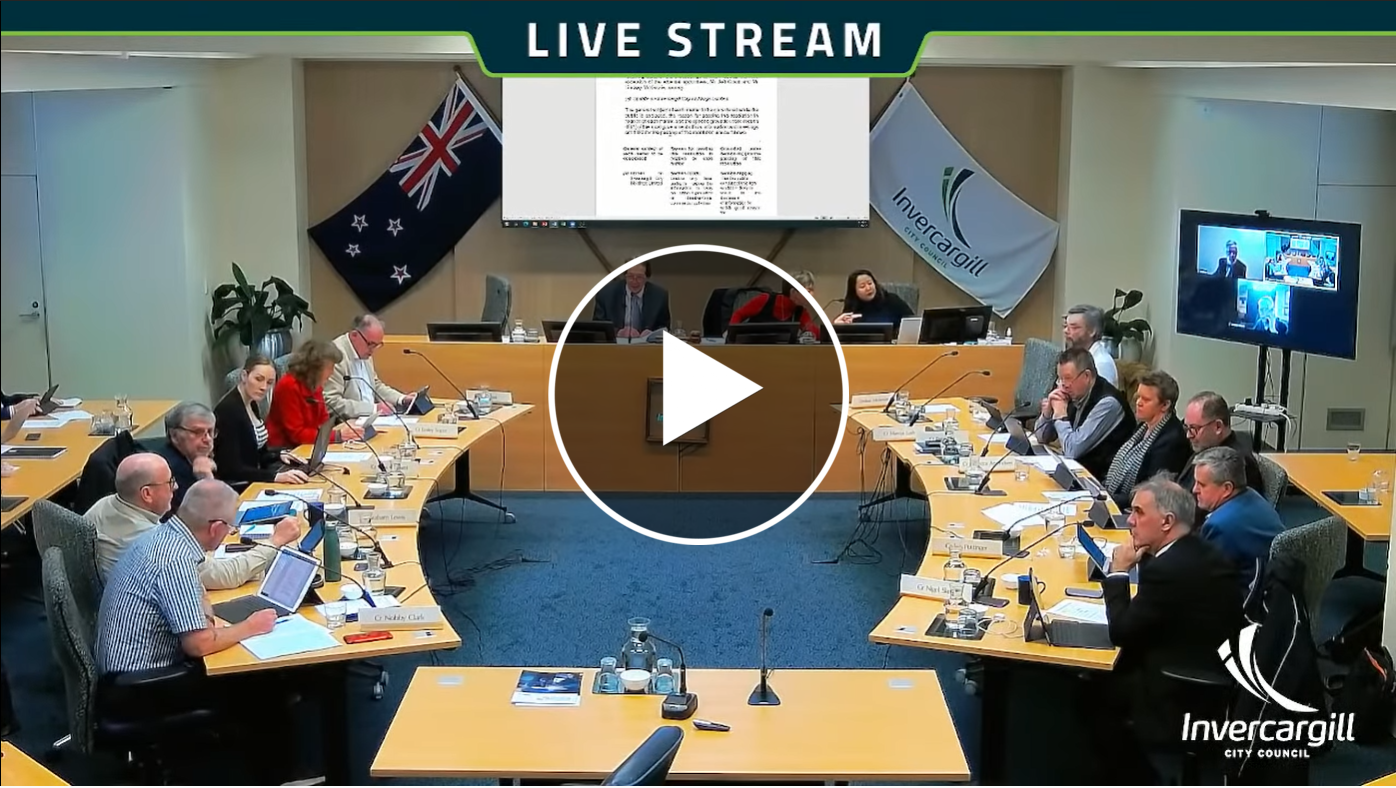 Repeatedly, faced with basic procedural motions, councillors are forced to explain: “Your Worship, we have already voted on that”.

This is not a one-off bad day. Six months ago, the Thomson Report, commissioned after the Department of Internal Affairs raised concerns about troubles at the Invercargill City Council described "obvious concerns including short term memory deficits, confusion, and the need to be closely managed ... increasing incidents of embarrassment during meetings which a, generally, compassionate Council has done their best to hide from the general public."

In the past we've given Sir Tim stick for his odd spending habits, but this is sadder and more serious. His ratepayers deserve capable representation. We like Sir Tim, and it's not easy to say this, but you only need watch the video above to appreciate that he needs to stand down. 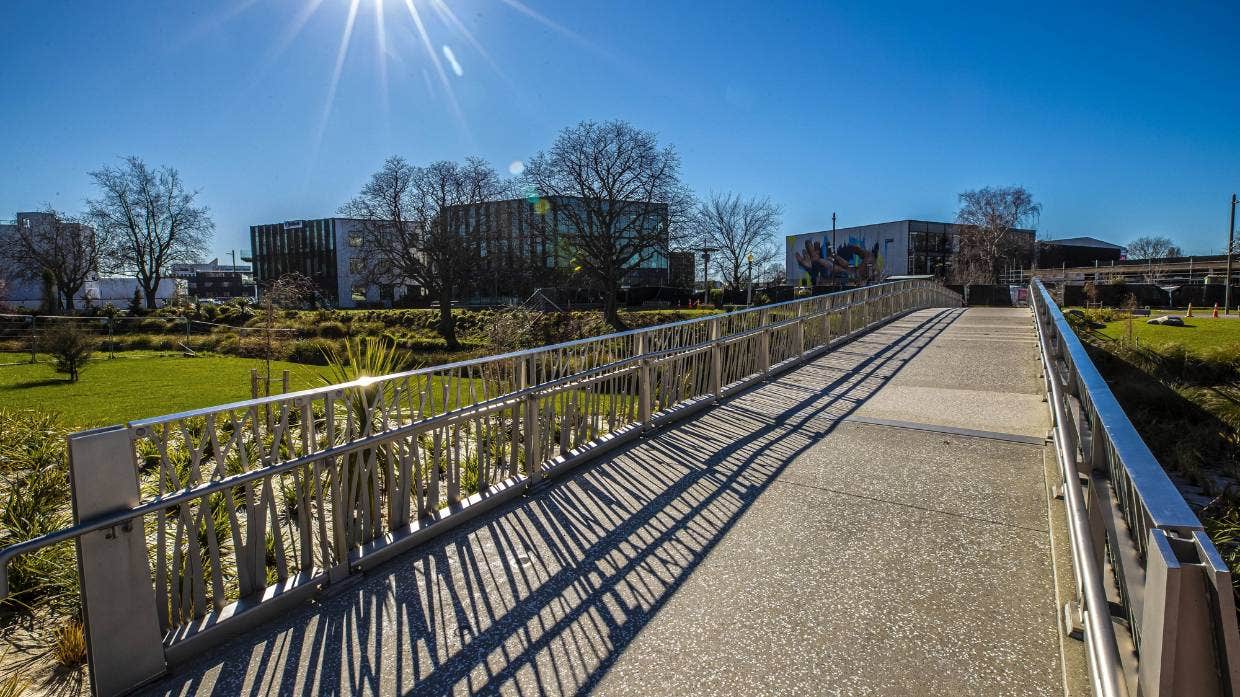 Here's a great example from Christchurch of how art, engineering, and other people’s money are a dangerous mix.

In 2017, Crown agency Otakaro spent $90,000 on a competition to design a pedestrian bridge, only to scrap all the submissions due concerns over maintenance costs.

Then, facing backlash from local artists, they engaged Ngāi Tahu to design flax-inspired ‘decorative elements’ for the bridge. Now, before the bridge has even opened, the decorative balustrades are *rusting* and require remedial work. The agency’s excuse: it rained last month!

This should have been a small project. But it’s now cost taxpayers $3.1 million, and we still don’t have an opening date for the bridge. What a shambles.

MPs, Councillors appear on our podcast

Our Researcher, Max, continues to crank out episodes of Taxpayer Talk. Here are some our recent guests:

Make sure you don't miss fresh episodes by subscribing to Taxpayer Talk via Apple Podcasts, Spotify, Google Podcasts, iHeart Radio and wherever good podcasts are sold.

Newshub  Lord of the Rings TV show: Minister under fire for not securing second season pledge

Sunday Star-Times  The scourge of the celebrity CEO

Rural News  How Much?