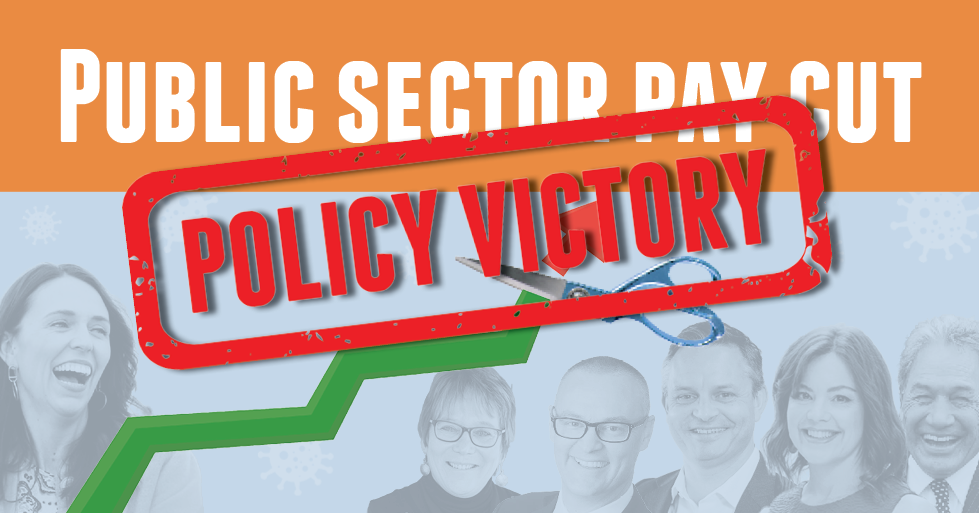 We've had another major win in our campaign for the public sector to share the financial burden of COVID-19.

Last month, we wrote to the State Services Commissioner and all major state sector agencies (including councils), asking if they would commit to a pay freeze and CEO pay cuts.

Remember, despite the fanfare (including from the Taxpayers' Union!) over the Prime Minister's original pay cut announcement, the small print revealed it only applied to a select group of "core public service" CEOs.

That meant that while Director-General of Health Ashley Bloomfield would be taking a 20% pay cut under the PM's policy, the six DHB CEOs paid more than Dr Bloomfield were protected! 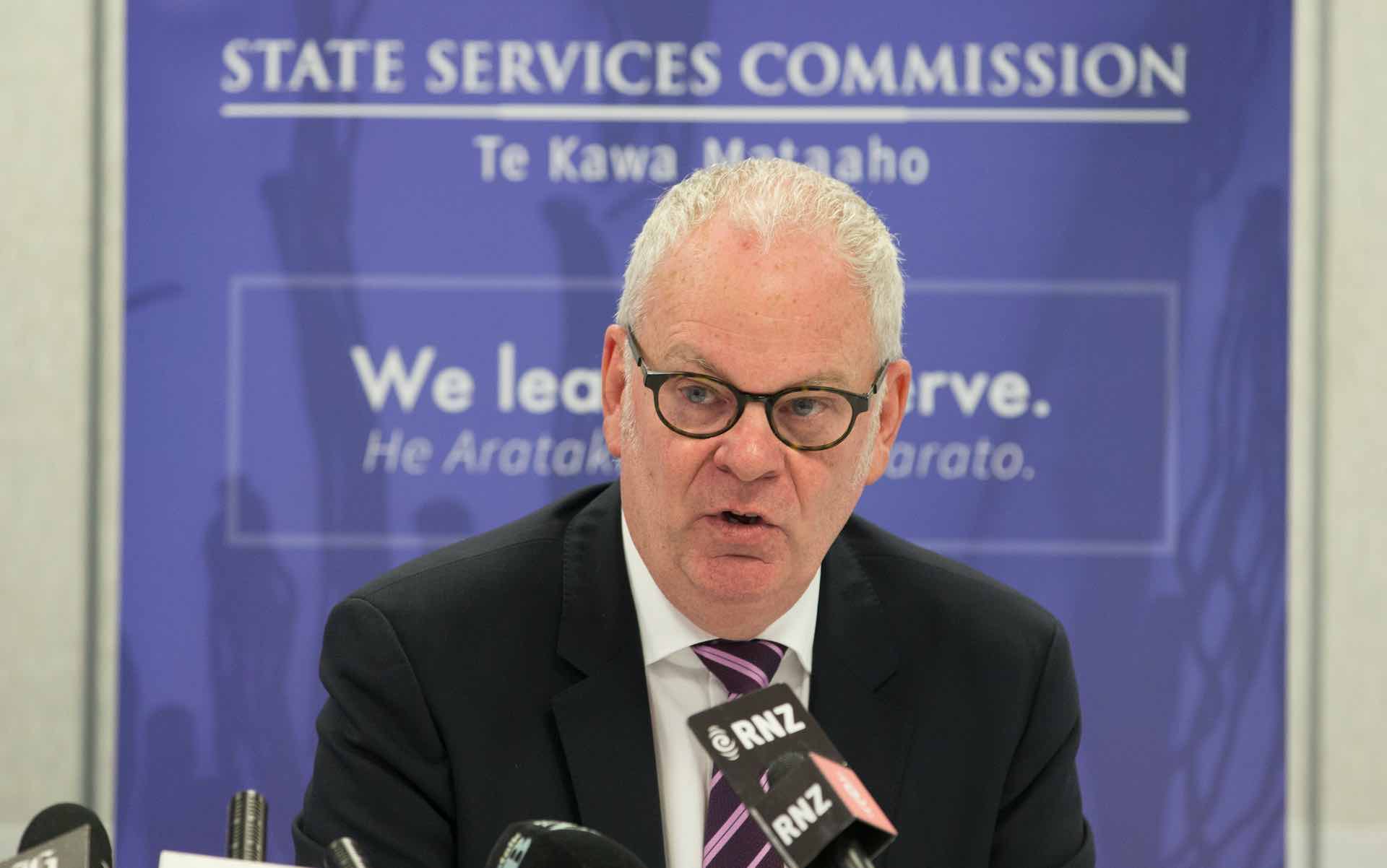 On Wednesday night we cracked open the (virtual) bubbly when the State Services Commissioner responded to our letter, saying he's now decided to recommend a pay freeze and CEO pay cuts for the whole state service. That includes DHBs, universities, crown agents (like ACC and Callaghan Innovation), and independent commissioners.

In the Commissioner's words:

I encourage chief executives to consider taking a similar reduction to their colleagues in the Public Service. As you know, the public sector is made up of a wide variety of organisation types. But the public view us all as the government. New Zealanders will be looking to us all to demonstrate leadership at this time.

Crucially, he is also recommending "no pay increases for senior leaders and higher-paid staff and no or minimal increases below that level."

This pay freeze will save far more money than the Prime Minister's original promise. And it couldn't have been done without the support of people like you who signed our petition and donated to the campaign efforts.

Now our campaign has reached the "snowball" stage, as different agencies scramble into action.

Public expectations are so strong now that even agencies exempt from the Commissioner's advice are telling us they'll cut pay!

So we are pleased to reveal that includes New Zealand's highest-paid public sector CEO: Matt Whineray from the Guardians of NZ Super. 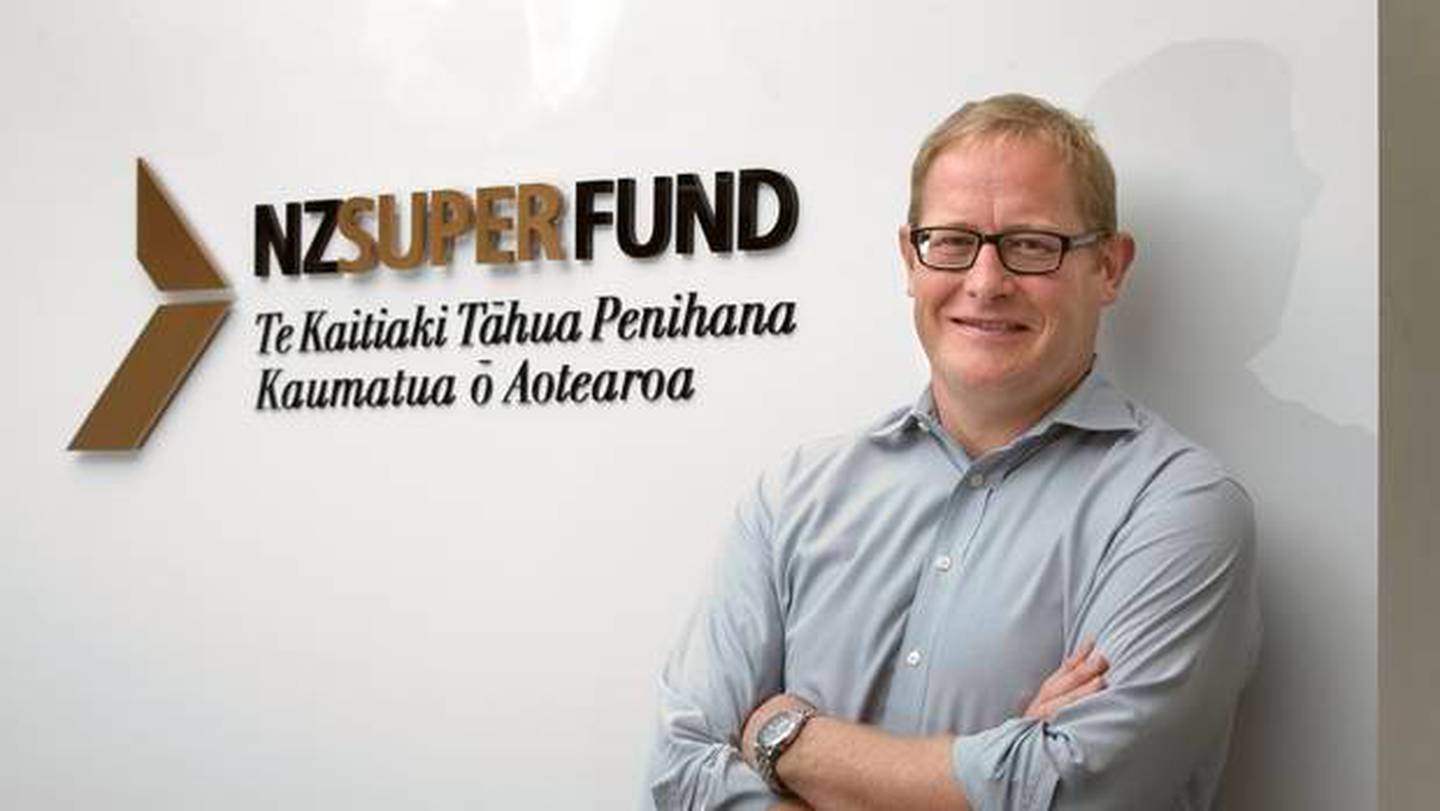 Last year Mr Whineray topped our Public Sector CEO Rich List with a salary of $1,065,000. His office has confirmed to us that he will take a six-month 20 percent pay cut.

Meanwhile, MetService has also informed us its CEO will take a pay cut, with pay hikes cancelled for all other staff. This one is significant because MetService is a state-owned enterprise. Now we can put pressure on other SOEs like New Zealand Post, KiwiRail, and Landcorp to follow suit.

Finally, while the State Services Commissioner does not have authority over local councils, the signal for town clerks could not be clearer. If they fail to cut their cloth, they will mark themselves as the most greedy class of bureaucrats. We're currently sorting through where each of the 78 councils stand: we'll be naming and shaming those who fail to share the economic burden of COVID-19.

Here's a sneak peek of the double-page ad they're publishing in Auckland newspapers: 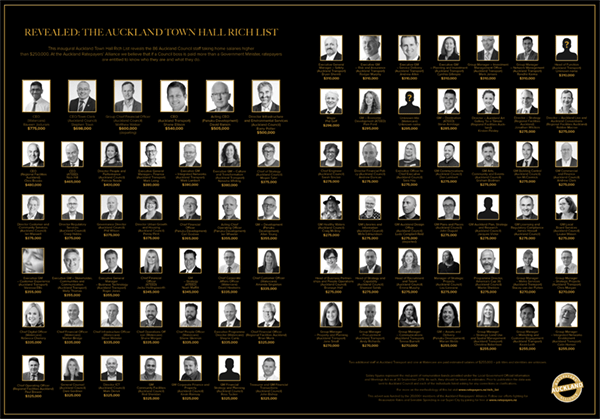 If you live in Auckland (or pay rates there) I highly recommend signing up to the updates from Jo Holmes and her Ratepayers' Alliance team. To do that, click here and you'll be sent the full Rich List as soon as it comes out.

Our team in Wellington has already started work on a nationwide Town Hall Rich List for other local councils, so watch this space. 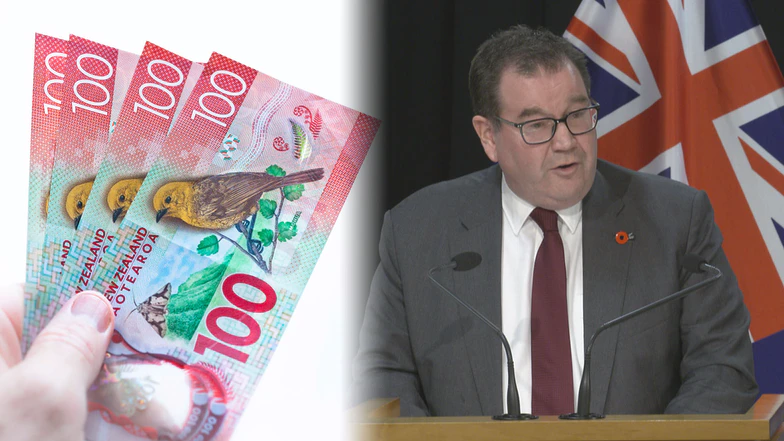 With banks carefully looking to manage risk and putting limits on lending, Grant Robertson has spat the dummy and decided to effectively open a bank of his own by offering interest-free business loans out of Inland Revenue.

The details are unbelievably lenient:

To qualify, all you need is 50 or fewer employees, have (or expect) a 30% decline in revenue in any month since January (the same as the wage subsidy), and make a declaration that you think the business will be viable after the coronavirus passes (a bonus for optimists!). IRD will simply assess whether your business is viable based on 2019 income.

You would almost have to question the business acumen of any business which did not take full advantage of the scheme regardless of need. The scheme gives two years to turn a profit on free money from the taxpayer.

The unintended consequences and risks for taxpayers are chilling. If you’re a company director with existing debt or finance, say on a company vehicle, you’re probably obliged to now move that debt onto the taxpayer. Why should taxpayers be forced to take on the commercial risks of almost every small business across the country?

If most eligible businesses take up the loan, our back-of-the-envelope calculation suggests the scheme moves about $6 billion of risk onto the Government's books. $6 billion (or six thousand million) is about $3,200 per Kiwi household.

Labour should have learned their lesson with interest-free student loans. Uptake was far higher than they had anticipated because Labour had only calculated the numbers of students "in need". In real life, most students looked at a deal they would never get from a bank or even their parents and said "I would be an idiot not to take this money even if I just put it in the bank". That is precisely what will happen here.

Because this is a policy targeted at small businesses, we're unlikely to see the National Party heavily criticise it. We exist to speak from a taxpayer perspective when politicians won't.

And it was an accident of Parliament?! 🤦

And from the 'you couldn't make this up' file, we now learn that the enabling legislation (passed under urgency on Thursday night) was mistakenly passed after an error meant that the wrong piece of legislation was introduced to Parliament.

Apparently the loan scheme legislation was just a draft. It hadn't been properly analysed by officials, and (so we are told) even been properly approved by Cabinet.

Think about that for a moment. A piece was legislation passed within a few hours, which accidentally brought into law a multi-billion dollar loan scheme equivalent to about one fifth the total annual spend of the Government.

Simon Bridges has been criticised for travelling to Wellington to do his job. We think the more valid criticism would be how on Earth the opposition didn't notice this monumental error!

ACT's David Seymour at least picked up on the mistake in his speech before the final passage of the Bill. But he didn't realise its significance. And even while criticising the Government's competence for tabling the wrong Bill Mr Seymour implicitly supported the measures, calling the loan package "positive".

Is no one in Parliament there for the taxpayer? 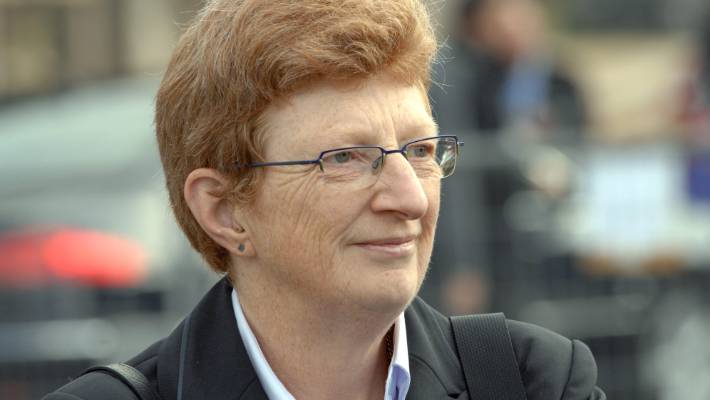 The 2019 Global Health Security Index (GHSI) concluded that New Zealand scored just 54 out of 100 points for pandemic readiness, which ranked us 30th among the 60 high-income countries reviewed. There is another, local report which might also cast doubt on our preparedness, but it is long overdue, and questions are beginning to be asked.

On your behalf, we've had a researcher laboriously watching all of the meetings of Simon Bridge's Epidemic Response Select Committee. On the 22nd of April, expert witness Sir Professor David Skegg raised the issue of what had happened to the broad review of the health sector which was being led by Heather Simpson, formerly Helen Clark’s long-serving Chief of Staff. The review was conducted before the COVID-19 outbreak. Its cost? A cool $9.5 million.

Professor Skegg noted that the final report was due in March, but it is still nowhere to be seen. Diplomatically, Professor Skegg said he was particularly interested in what the report might have said about the state of our pandemic preparedness before the outbreak. Others have not been so charitable with growing concerns that the Simpson report was going to be critical of our readiness at the time, but is now being sanitised to avoid embarrassing the Government.

We sure would like to see the Tracked Changes on that report when it is released… which will probably be at 5pm on a Friday.

Finally this week, a lighter note: 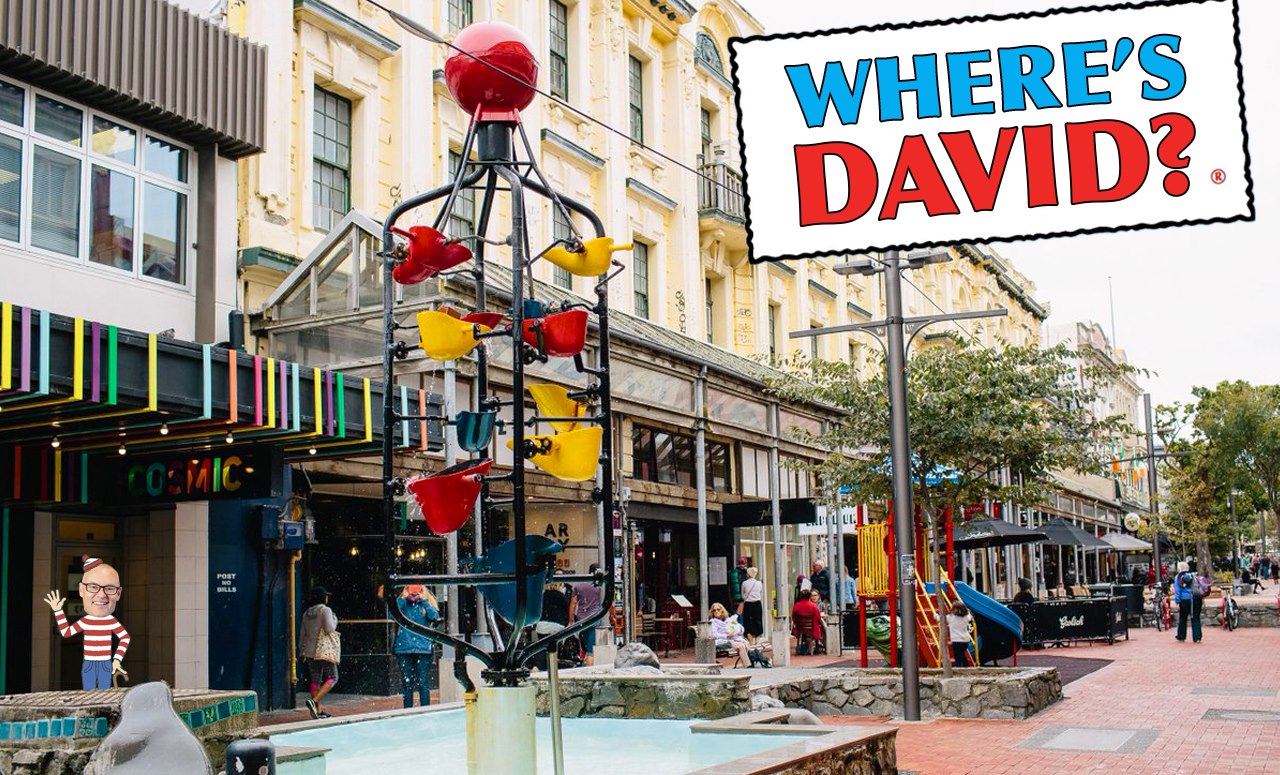 Observers of politics were shocked when the Hon Dr David Clark was reportedly spotted in Wellington. Dr Clark, who during the COVID-19 crisis has provided Acting Minister of Health Dr Ashley Bloomfield with long distance intangible moral support from his opulent Dunedin bubble, apparently broke his self-imposed strict self-isolation policy to visit the nation’s capital.

For weeks now, Dr Clark has assiduously isolated himself completely from health policy, media, politics, constituents, the Epidemic Response select committee, mountain biking, being a Minister, daily press briefing sessions, and nighttime spear fishing from a homemade microlight aircraft (although the last one was a work in progress).

Here at the New Zealand Taxpayers’ Union we felt that such a momentous occurrence had to be celebrated. In normal times we would have sent Porky the Waste-hater to publicly accost Dr Clark and deliver a petition that he returns his Ministerial salary for the last month. Alas, Porky, like the rest of us, is in lockdown and does not think he could catch Dr Clark on the bike track in any case.

So, the Taxpayers’ Union most senior analyst spun our patented Decision Wheel. It basically is a cheap cardboard wheel covered in obvious suggestions. Using the Decision Wheel takes 30 seconds, costs nothing, and is still more sensible that many Government spending decisions. The Wheel suggested “run a competition”. Our first thought of asking taxpayers’ “if the Minister of Health can effectively disappear during the biggest health crisis of our lifetime, what are we paying the Minister of Health for?” This was disqualified as a trick question because the answer was far too easy.

We then struck on the idea of “Where’s David?” – a game loosely based on “Where’s Wally”, a game which everyone knows but no one over the age of 8 ever plays unless forced to by someone under the age of 8. It is also discriminatory against colour-blind people, according to our junior colour-blind researcher. The consensus is that he must have lost repeatedly to a six-year-old to be so bitter.

So, the rules are simple. We are asking people all over New Zealand to be on the lookout for Hon Dr David Clark (from the safety of their bubbles of course). Send us a verifiable photo of a sighting and be in to win the Grand Prize of a Mountain Bike… ride after lockdown is lifted. To make things easier for contestants, the organisers have published a list of places that Dr Clark will definitely not be sighted: